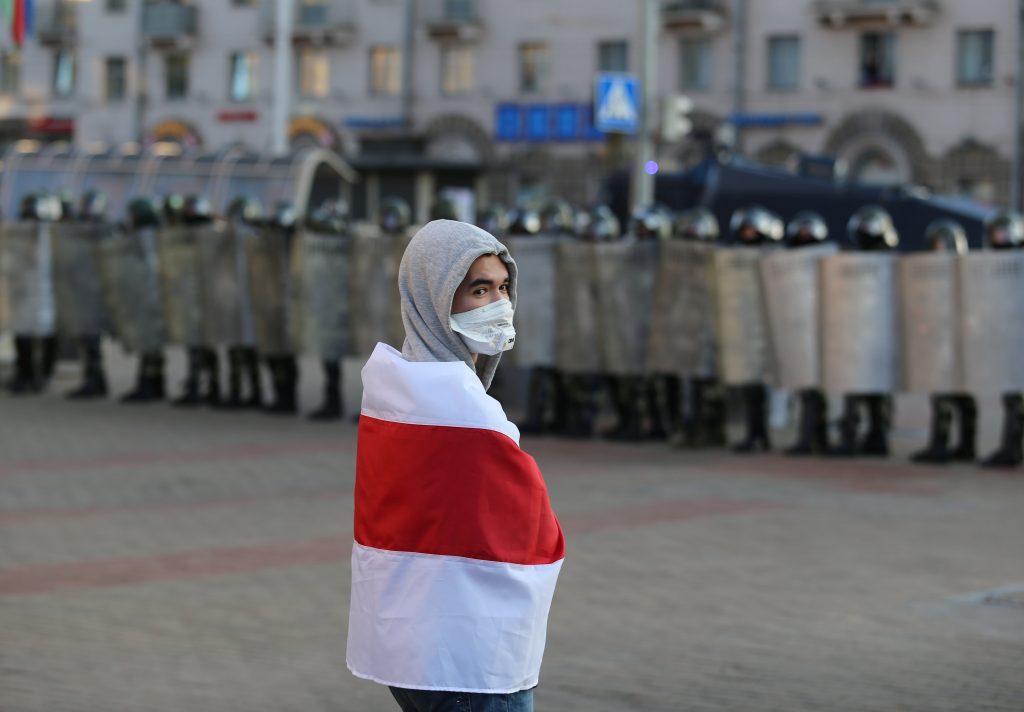 The Belarusian Defense Ministry announced this week that it is moving a tank battalion to its Western frontier near the Polish border, a move that comes in conjunction with a menacing build-up of Russian forces in Kaliningrad and near the Ukrainian border.

Just days before that announcement, the Deputy Chief of the Belarusian General Staff Pavel Muraveiko said the massive Zapad-2021 joint military exercises with Russia in September will focus on fighting a “hybrid war” and will include offensive as well as defensive capabilities.

The Belarusian Foreign Ministry, meanwhile, said it would close several embassies in Western countries, with subsequent leaks suggesting these would be in Poland, the Baltic states, and Ukraine. That announcement came just days after reports that Lukashenka and Kremlin leader Vladimir Putin spoke by telephone about the “threats” emanating from Poland and the United States.

And the Russian daily Nezavisimaya Gazeta is reporting that with a series of personnel changes, Lukashenka is moving from a posture of “information confrontation” to one of “information warfare,” appointing “ideologically tested cadres to lead the troops.”

The new Belarusian Information Minister will be Vladimir Pertsov, who previously worked as head of the Belarusian branch of the Moscow-based Mir Television and Radio company. Political analyst Pavel Usov told Nezavisimaya Gazeta that Mir is “a symbol of Russia’s information presence in the post-Soviet space” and Pertsov’s appointment is an “ideological bow to Moscow.”

These military, diplomatic, and personnel moves all come in the context of a visible expansion of Russia’s economic, political, and military footprint in Belarus. This includes a record number of joint military exercises scheduled for this year, which enables Moscow to use the rotation of forces to establish a de facto permanent troop presence in the country; a campaign by Kremlin-connected oligarchs to snap up the crown jewels of the Belarusian economy; and an effort by Moscow to establish political parties and media outlets enabling Russia to dominate post-Lukashenka Belarus.

But as the unmistakable trend towards the Russification of the Belarusian state unfolds, a very different dynamic is developing in Belarusian civil society: ordinary Belarusians are increasingly distancing themselves from Russia and embracing the West. The trend is clearly visible in recent public opinion polls.

In one November 2020 poll conducted by the Belarusian Analytical Workshop, 40 percent of respondents said Belarus would be better off in a union with Russia, while 33 percent favored integration with the European Union. That marked a sharp drop in pro-Moscow sentiments and a rise in pro-European attitudes since the same poll was conducted in September 2020, when a 52 percent majority had favored integration with Russia, while only 27 percent supported closer ties with Europe.

Polls are also showing a sharp drop in support for Putin, who has historically been very popular in Belarus. According to a November 2020 Chatham House online poll, 34.6 percent of Belarusians said their attitudes toward Putin had become worse due to Russia’s actions in Belarus since protests broke out in August 2020. Just 7.5 percent said their opinion of Putin had improved. Likewise, 33.9 percent said relations between Russia and the Belarusian people will get worse because of Russia’s actions. Just 18.3 percent said they would improve.

Similarly, a poll by the Warsaw-based Center for Eastern Studies (OSW) in late November and early December 2020 showed that 43 percent of respondents consider Russia to be the greatest threat to Belarusian sovereignty and territorial integrity, the highest figure among all countries featured in the survey.

Shifting attitudes are also reflected in a re-evaluation of the country’s history and identity. Belarusians are increasingly looking to the country’s European history prior to its incorporation into the Russian Empire in 1796, specifically the centuries the Belarusian lands spent as part of the Grand Duchy of Lithuania and the Polish-Lithuanian Commonwealth.

The OSW poll showed, for example, that a staggering 62.2 percent of Belarusians believe their country should draw inspiration from periods when they were not ruled by Russia. According to OSW, “many more Belarusians believe that their state should draw upon the traditions of the Grand Duchy of Lithuania or the Polish-Lithuanian Commonwealth (39.7% and 6.3% respectively) rather than the Soviet Union (28%). Attention should also be paid to the relatively good result for the Belarusian People’s Republic (16.2%), the short-lived entity which resulted from an unsuccessful attempt to build an independent and anti-communist Belarusian state in 1918.”

The battlelines in Belarus are becoming increasingly clear, pitting a society that wants to move West against a regime that is tightly embracing Russia.

Image: A Belarusian demonstrator faces riot police in Minsk in September 2020 during the early stages of an ongoing pro-democracy protest movement against Belarus dictator Alyaksandr Lukashenka. (Tut.By via REUTERS)