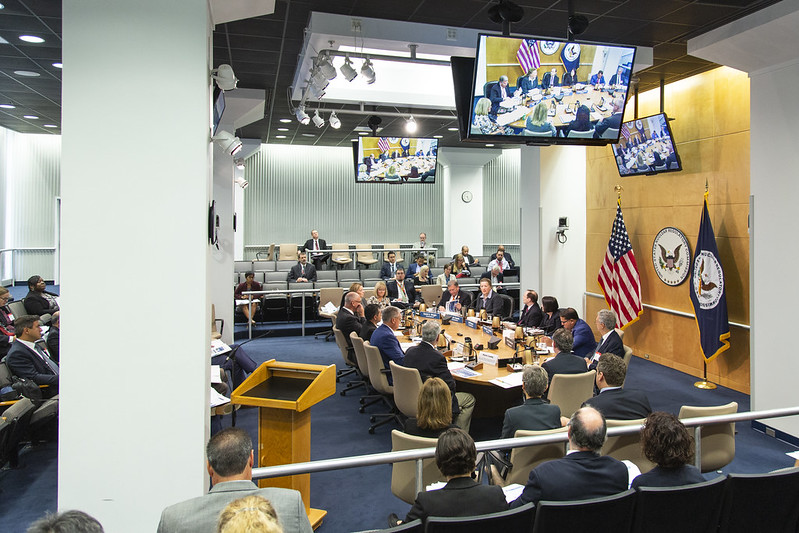 Driven in part by concerns over climate change, nuclear energy is receiving renewed attention. Although nuclear energy only accounts for 10 percent of global electricity generation, it provides 30 percent of global low-carbon electricity, indicating that nuclear energy could be poised for substantial growth as climate concerns increase. A recent study by Third Way, a US think tank, estimated that the global market for nuclear power could triple by 2050. US companies are designing the next generation of nuclear reactors, which are generally smaller in size and in megawatts than traditional light-water reactors and with generally improved safety and security features. These new nuclear projects could potentially earn a large share of the growing global nuclear market and, in the process, generate US jobs at home through exports, while helping to limit greenhouse gas emissions abroad.

However, in order for the United States to meet growing international demand for nuclear reactors—rather than ceding the mantle of global exports to Russia and China—the United States will need to increase coordination with its allies in commercializing advanced reactors and in offering competitive financing packages to third-party countries. In order to cooperate effectively with allies, the US government must streamline its interagency processes that facilitate exports and reform laws that govern foreign investment in US nuclear energy programs. These changes are worthwhile, especially if they can help the United States strengthen its domestic fleet and its nuclear export program, which will contribute to global climate goals and ensure that new nuclear builds are held to the highest safety and nonproliferation standards.

While the United States was once the undisputed leader in developing new nuclear energy technologies, that leadership has since atrophied. The only two reactors currently under construction in the United States are well over budget and schedule, with two other reactor projects cancelled in 2017 due to similar cost overruns. Russia, on the other hand, has become the leading supplier of reactors to other countries in recent decades. China, with the largest domestic build of reactors currently underway, is well on the path to becoming a global force in the international nuclear energy market. Ceding leadership in this energy space to the Chinese and Russians would have negative geopolitical implications for the United States.

But the future is potentially much brighter for US nuclear. There are over sixty advanced reactor designs under development in the United States, and the recently launched Advanced Reactor Demonstration Program housed within the US Department of Energy (DOE) is planning to construct and operate two reactors in the United States before 2027.

There are a series of policies the US government can pursue that would give American nuclear energy products the competitive edge needed to compete with Russia and China, and to export the security and safety standards that accompany US technologies.

First, the federal government should establish a more comprehensive and coordinated interagency system focused on the development and deployment of civilian nuclear technologies, which would support bringing advanced nuclear power to the global market. This would involve establishing a collaborative network of nuclear-specific staff positions embedded in the collection of government agencies that play a meaningful role in safely and securely developing, deploying, and exporting US energy technologies.

Similar to the “Team USA” whole-of-government approach first initiated under the Obama Administration, a network of nuclear-specific staff positions could be located across different US agencies including: the Department of Energy, Department of State, Nuclear Regulatory Commission (NRC), White House Office of Science and Technology Policy, National Security Council (NSC), Department of Commerce, and any future Climate Office. While the Obama Administration created an NSC role to coordinate interagency nuclear policy, and the DOE report released earlier this year, Restoring America’s Competitive Nuclear Advantage, recommended reinstating that role, there is currently no high-level mechanism for interagency coordination on US nuclear exports. And, since it is difficult to export a product that lacks a domestic market, continued policy support for constructing advanced reactors here in the United States is imperative.

Second, the United States should work more closely with its allies on reactor development to help counter the geopolitical challenges posed by China and Russia. In the past year, a variety of reports—including papers from the Atlantic Council, Columbia University’s Center on Global Energy Policy, and the Global America Business Institute—have suggested strategies for better collaboration on nuclear power among allies. For example, the United States could pursue a cohesive government strategy for interfacing with foreign governments and international lending institutions on co-financing reactor projects.

The United States can also collaborate with allies more at home. The US domestic reactor fleet, which provides half of clean power electricity generation in the United States and plays an integral role in the national security apparatus, is strengthened by investments from foreign allies. However, the domestic nuclear energy industry is hampered by outdated policies enacted in 1954 that govern foreign civil nuclear investments, policies in need of reform by the United States Congress. In 1954, and for most of the twentieth century, the United States was the dominant force in the global civilian nuclear trade.

Today, the international nuclear energy marketplace has changed dramatically as the supply chain has become globalized. In July of this year, a bipartisan group of former NRC commissioners sent a letter to Congress (displayed below) urging them along these lines to modernize the Atomic Energy Act of 1954 (AEA) to better enable the United States to work with its allies on nuclear energy projects. The letter urges Congress to lift the foreign ownership, control, or domination (FOCD) restriction in sections 103d and 104d of the AEA, which has inhibited investment from allies in domestic reactors in the past. Since domestic power plants in the United States today rely on cooperation with foreign suppliers of power plant components, the FOCD restriction presents an anachronistic problem for US nuclear power plant projects. The law, as it currently stands, does not take into account the extent to which corporations have become multinational in the last few decades; this is just one example of an area of nuclear policy in need of an update.

Given the extent to which nuclear energy is a key tool in the fight against climate change, and given the importance of US leadership on civil nuclear exports for maintaining global safety and nonproliferation standards, it is critical that the US government improve its interagency coordination processes to craft a coherent export policy. At the same time, the United States is unlikely to realize its full potential in the nuclear energy sector without international cooperation with allies, especially since most nuclear energy companies are multinational. A robust domestic nuclear reactor fleet and an effective civil nuclear export program are inextricably linked to one another; both are necessary for US leadership on climate, safety, and nonproliferation, and both will be strengthened by US cooperation with allies.

Innovation in Nuclear Energy Technologies: Implications for US National Defense

The US Department of Defense (DOD) has the potential to play a significant role bringing advanced reactor technology to demonstration and, ultimately, commercialization. Possible US military applications of advanced reactors—especially micro nuclear reactors (MNRs)—include deployment to remote bases that are challenging to supply with fuel; power systems for directed-energy weapons; and nuclear energy systems for space flight and off-world bases. This issue brief explores the challenges and opportunities inherent in DOD’s procurement of MNRs.

US nuclear energy leadership: Innovation and the strategic global challenge

By Atlantic Council Task Force on US Nuclear Energy Leadership

A flourishing domestic nuclear energy sector is critical to US national security, both in the interconnections between military and civilian uses of nuclear energy, as well as in foreign policy.