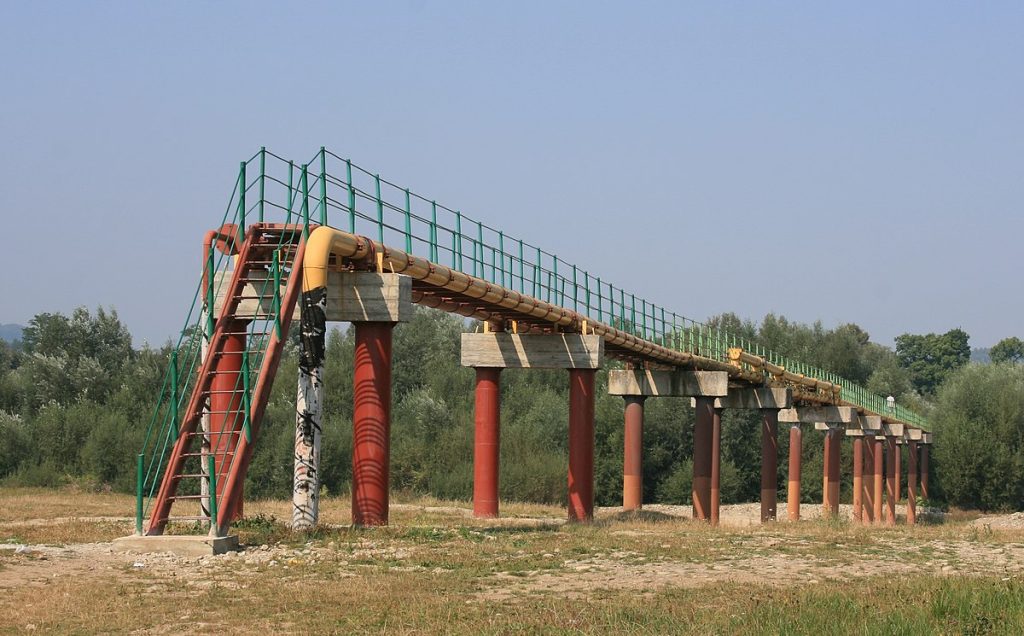 Given the high level of EU dependence on Russian oil, an outright ban on Russian oil imports, like the US ban recently announced by President Biden, would inflict significant economic damage on European consumers. According to the International Energy Agency (IEA), European OECD members import approximately 3.1 million barrels per day (mbd) of crude oil, largely Urals crude. Already hammered by high natural gas prices and rising cost of living, consumers would face another major shock if oil prices suddenly spiraled higher due to constricted supply. Instead, a war levy imposed on Russian oil imports would strip Russia of a significant portion of its oil rents while keeping European demand satiated and prices manageable.

The Druzhba pipeline would be the ideal initial target for the war levy. Oil flow through Druzhba into Europe is connected to a fixed pipeline route, the oil itself is a high-sulfur product called Urals crude meant primarily for specially calibrated European refineries, and tanker capacity is likely too limited to take on an extra 750,000 barrels per day, due to congestion, self-sanctioning, and other such impediments. In addition, given the scale of Western sanctions imposed on the Russian Federation already, Moscow will be seeking to obtain every last bit of revenue to keep its economy afloat. In other words, it would have not much choice but to accept the levy and continue pumping.

If, for example, a $25/barrel war levy was brought into force, it would raise approximately $7 billion annually. Once the levy was put into operation, it would then be extended to the 2.35 mbd of Russian crude oil arriving by tanker into European ports. This extension of the war levy to match the $25 levies on the Druzhba pipeline would raise approximately $27 billion annually. These funds could be held by the European Union to assist member states in dealing with the costs of the invasion, such as looking after the massive influx of refugees. Captured rents would also be available to the government of Ukraine to provide macroeconomic, budget, and humanitarian support within the territory under its control.

But even with the profit reduction, export to the EU would remain attractive to Russia. Already, because of the spillover effects of existing sanctions, Russian oil producers are having difficulty selling oil in international markets, offering discounts of 20-30 percent to ship their product. A levy would keep the Russia-EU oil trade legal, making it a more attractive option for Russian producers while directing rents into EU coffers.

Furthermore, the impact of sanctions imposed since Russia’s invasion of Ukraine have removed many of its streams of revenue, as well as blocking access to approximately 50 percent of its sovereign reserves. As a result of these sanctions, JP Morgan predicts a 35 percent drop in Russia’s GDP in the second quarter of 2022. The Russian state will be desperate for revenue. Russia will thus be highly unwilling to cut off the Druzhba pipeline or deliberately cease tanker deliveries to Rotterdam to avoid the levy. Exacerbating matters, some key Russian-owned assets, such as the major refinery in Schwedt, Germany (nearly 92 percent owned by Rosneft), depend on Druzhba deliveries.

It would also be difficult for Russian oil producers to easily switch from producing Urals crude for the European market to shipping it to markets elsewhere. Urals crude has a high sulfur content, for which European refineries are specifically calibrated. Refineries in China, often floated as Russia’s best lifeline out from under punishing Western sanctions, do not possess sufficient capability to use this quality of crude as yet, and the cost to develop that capability would be significant. And putting barrels onto tankers in search of compatible non-European refineries is no sure bet, either; moving so many barrels would introduce serious lag to markets, and the various entities who participate in oil export—from shipping companies to insurance firms—may decide getting involved is not worth the risk of transgressing future sanctions. Many have already made that decision for reputational and security reasons. To a degree, then, Russian oil would be forced into EU markets, keeping the impact on the average European consumer minimal.

Clearly there will be some evasion from oil flows to Russia’s Far Eastern Federal District. For example, there is the Eastern-Siberian Pacific Oil Pipeline (ESPO), which goes from Irkutsk to the Russian far east coast. It will soon have a 1.6 mbd capacity, along with a small spur pipeline directly to China which can carry 300,000 barrels per day (bd). It may be also impossible to sanction Chinese tankers and insurers picking up the remaining oil arriving at the Russian terminal at Kozmino. However, most Russian oil production is in western Siberia, reaching Europe via the Baltic Sea, the Black Sea, or the Druzhba pipeline. Almost all this production relies on tankers and insurance, which are capable of being targeted with sanctions.

Imposing a levy on Russian oil resources would serve a powerful dual function. It would enhance the EU’s capacity to stabilize energy markets and cope with the costs of war in the EU and Ukraine. At the same time, it would reduce Russia’s capacity to pay for its war efforts. Such a levy, if expansive enough to apply to all Russian oil products, could even generate enough resources to develop alternative energy infrastructure, making Russian energy flows into Europe increasingly marginal. But in the immediate period after implementation, due to the market realities faced by Russian producers, Russian oil will likely continue to flow into Europe, keeping prices down, the economy strong, and the leverage with the EU.

An embargo on Russian oil may not have the intended effect on Putin’s war chest, as a squeeze on global oil supply could inadvertently create more profits for Russian producers. But a punitive tax might work better, keeping prices at market level while setting aside profits to use for diversification, price shock mitigation, and support for Ukraine.