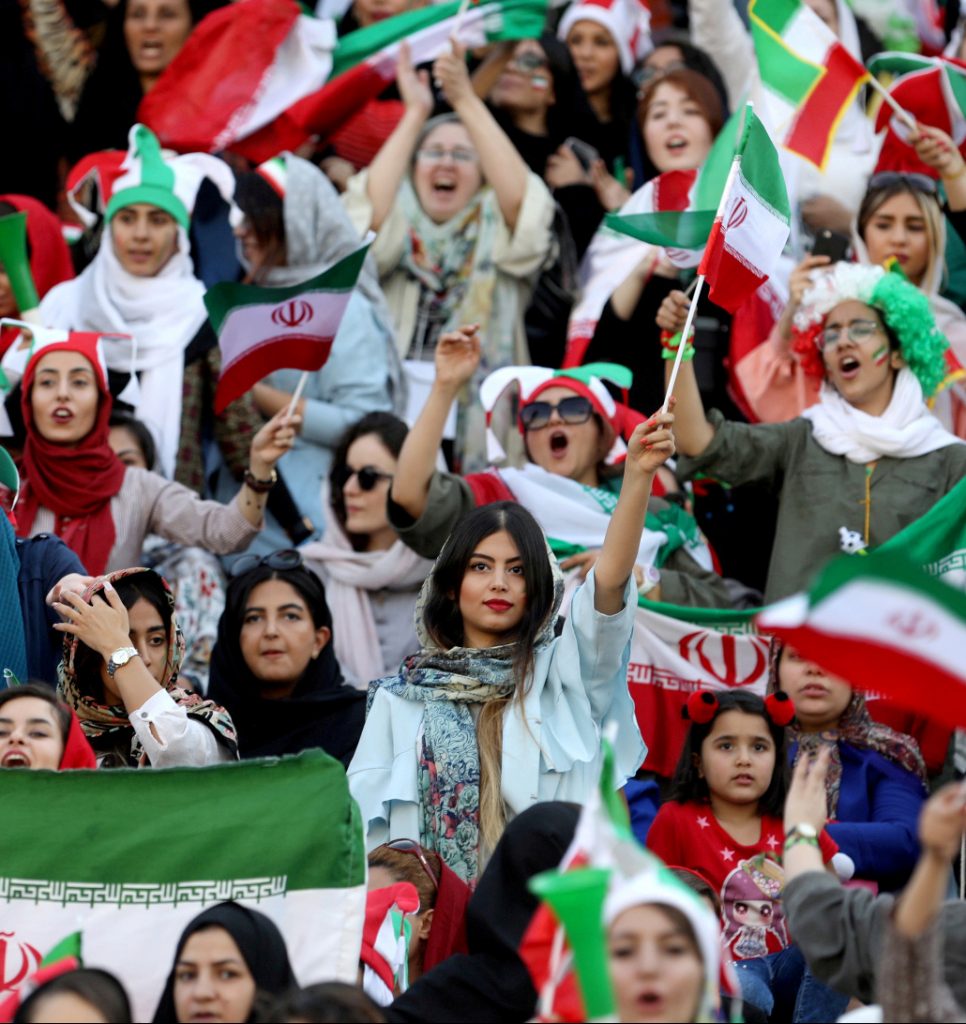 It was a day that many Iranian women will remember joyfully.

On October 10, women were permitted to enter Tehran’s Azadi Stadium to watch a World Cup qualifying match between Iran and Cambodia.

More than Iran’s 14-0 blowout victory, the major reason for the celebratory atmosphere was the women’s authorized presence for the first time at what had been a venue exclusively for men.

Shirin, one of the spectators, told BBC Persian that the women—who were seated in a section separate from men—experienced no problems from rowdy fans—one of the reasons Iranian conservatives have used for years to bar women from attending sports events.

Iranian women wore face-paint and jester hats in Iran’s national colors of red, white and green. Others draped themselves in the Iranian flag. Hamshahri, the daily newspaper of Tehran’s municipality, ran a story about a street vendor woman who made a fortune selling wrist bands, flags, and stadium horns to female spectators.

Given the unequal nature of the teams, the stadium was largely empty. The government restricted the number of seats for women to 3,500 initially but could have sold more since the stadium houses 100,000.

Hardline Keyhan newspaper wrote that 4,600 seats were available for women but were not sold because “most women are not keen to go to the stadium.” It suggested that those who attended were “victims” of Iran’s reformist political trend.

Reformists countered that the move was both popular and a sign of social progress. The Vice President for Women and Family Affairs Masoumeh Ebtekar tweeted that “restrictions on women’s entrance have been lifted. This has led to a new era of hope and optimism.”

A combination of domestic and international pressure resulted in the decision by the Iranian government to finally allow women to attend soccer matches at Iranian stadiums.

There is no law or official decree in the Islamic Republic that prohibits women from attending sporting events; foreign women journalists have been allowed into Iranian stadiums as far back as 1998, when US wrestlers took part in a major international competition at Tehran’s Azadi arena. For Iranian women, there have been “on and off “ policies on the matter. There were times where women were able to purchase tickets and times when they were barred. Hardline groups and clerics have consistently insisted that it is a threat to Islamic morals to allow women to watch scantily clad male athletes and be subjected to uncouth male fans at athletic events.

Former hardline President Mahmoud Ahmadinejad took a different approach. In 2006, he allowed women to attend a match between Iran and Bolivia. “The best stands should be allocated to women and families in the stadiums in which national and important matches are being held,” Ahmadinejad said, claiming that “the presence of women and families in public places promotes chastity.”

Conservative clerics strongly confronted Ahmadinejad on the issue and the Supreme Leader forced Ahmadinejad to go back on his promise.

Ahmadinejad’s successor, Hassan Rouhani, also took up the cause. On May 22, Rouhani insisted that the ban on women’s access to sports arenas should be lifted. He also noted in a meeting with athletes: “There should be no difference between men and women in Islam, and for that reason women should also be allowed to take part in sports events.”

Last year, women were allowed into Azadi Stadium to watch a qualifying match on a projector screen. Rouhani’s Sports and Youth Affairs Minister, Masoud Soltanifar, noted: “For the very first time since the Islamic Revolution [1979], families attended Azadi Stadium to watch the matches of the Iranian national football team with their opponents [Portugal] at the Russia World Cup 2018 on the big screens, while observing all Islamic protocols.”

Conservative clerics have kept up their campaign against women’s admission to sports arenas, arguing that this is contrary to morals and family values. According to Grand Ayatollah Lotfollah Safi Golpayegani, “It is not glorious to allow women enter an arena for watching soccer games.” He has repeatedly voiced his opposition to women participating in or attending sports activities.

International pressure from FIFA, the international body governing soccer, was an important factor in the government’s decision to allow women into sports stadiums. The final catalyst, however, was the death of Sahar Khodayari, a young woman who self-immolated after being arrested and threatened with a jail term for trying to enter Azadi Stadium to watch a match. Told of an impending jail term, she set herself on fire and died a few days later in the hospital. The incident led to a domestic and international outcry in support of the “Blue Girl” as Khodayari was known as a fan of Esteghlal soccer team whose team color is blue.

FIFA President Gianni Infantino said after Khodayari’s death that Iranian authorities had assured him that women spectators would be allowed to enter arenas to attend soccer games. On August 25, Iranian Deputy Sports Minister Jamshid Tahizade announced that women would be allowed to attend the Cambodia match but there was uncertainty over whether that decision would stick.  Meanwhile, many fans urged Iran to allow more tickets to be sold to women beyond the 3,500 allotment.

Opposition to the decision continues to be expressed in Iran. Ayatollah Nasser Makarem Shirazi criticized FIFA’s warning as “interference in our domestic affairs.” On October 7, a group of fifty men with hardline conservative views gathered in front of the parliament to protest the lifting of the ban.

Some women’s rights advocates downplayed the decision, noting that other issues such as equal compensation for injuries and rights to inheritance, divorce, and child custody are more critical. But they acknowledge that for young people, access to sports and other entertainment is important.

In a country where football was traditionally seen as a man’s sport, I was a passionate football fan. For Iranians, it was considered not just strange but taboo that a young Iranian girl be into football the way I was while growing up. It hurt whenever people mocked me, “Girls know nothing about football, they […]

‘Futsal’ and the Politics of Women’s Sports in Iran

Iranian women have excelled in the sport of “futsal,” a variation of soccer played on a smaller, hard court. The Iranian team in May 2018 reconfirmed its top position in Asian futsal, winning the championship match 5-2 over Japan with a dazzling five goals in the second half. Success in the sport has brought pride […]

The one thing, besides Nowruz, that unites Iranians across the globe is Team Melli, the national soccer team. If social media is any indication, Team Melli is an obsession for Iranians everywhere. Iran qualified for this summer’s World Cup on June 17, 2017, the first time the country has punched its ticket for two consecutive […]