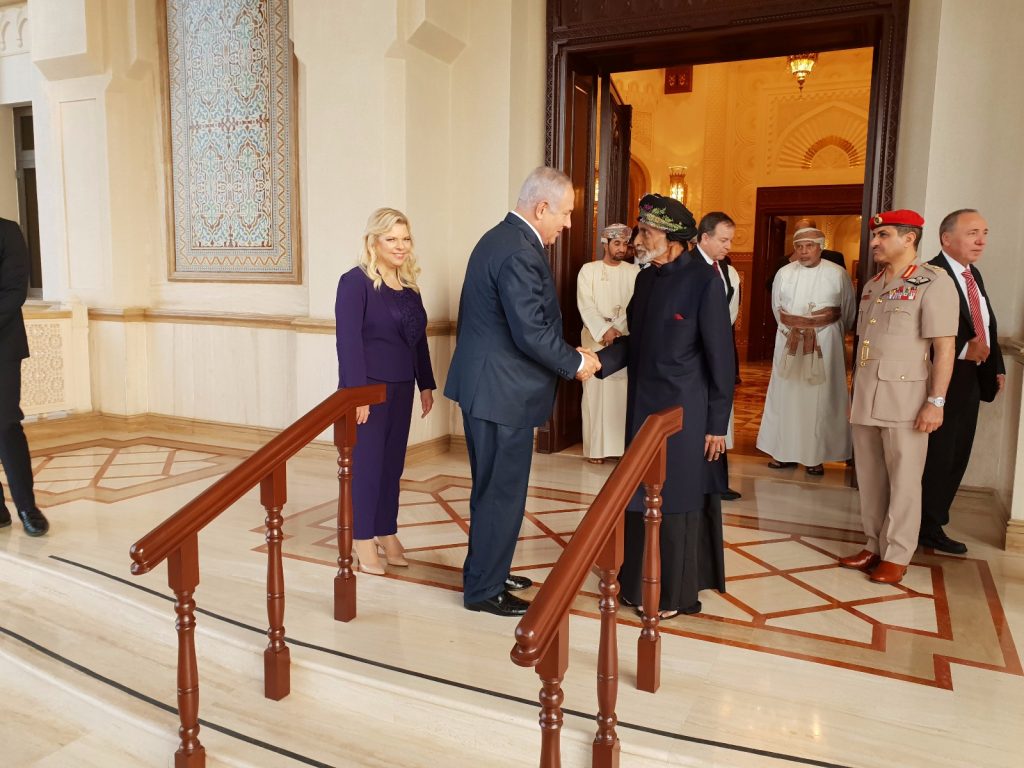 In late October 2018, Israeli Prime Minister Benjamin Netanyahu flew to Oman for an unannounced visit. It was the first meeting in twenty years, with a country Israel has no relations. This meeting is an indication of Israel’s increasing efforts to build relations with Arab states in the region. Many of these ties are kept either secret or conducted quietly. However, over a year after the Oman trip, Netanyahu faces political and legal crises at home and tensions with Iran in the region. This leads to questions about the near-term future, what might develop in Israel-Gulf relations and will any of the behind-the-scenes discussions become more formal or institutional?

It has been an unprecedented year in terms of US policy in the region, especially Israel-Gulf relations. In May, US-Iran tensions grew and Iran was accused of attacks on oil tankers. A US drone was downed and drones and cruise missiles, likely launched by Iran, attacked Saudi oil facilities in September.

Israel and the Gulf have many things in common and potential ways to work together on hi-tech, agricultural technology, and the kinds of innovations that made Tel Aviv a center of start-ups. So long as security remains the driving factor of the relationship there is less chance for trade. On the security front Israel’s advances in air defense, electro-optical and intelligence gathering have ramifications for Gulf states that have shared interests. For instance, cooperating against shared views of Iranian threats, like the Abqaiq or the Gulf of Oman incidents, would be a natural path to cooperation. Although, more public cooperation is historically linked to changes on Israel-Palestinian issues and the US role in the region.

However, Iran’s actions tested the resolve of the Unite States and Saudi Arabia. This creates a complex problem for all the Gulf states, particularly the United Arab Emirates, Bahrain, and Saudi Arabia because rising tensions affect oil shipments and can potentially destabilize them if a wider war were to erupt. US Chairman of the Joint Chiefs Mark Milley, recently traveled to both Israel and the Gulf to reassure regional allies. Milley travelled to Israel, Jordan, Bahrain, and Saudi Arabia,—key states that either Israel has relations with or that share concerns of an Iranian threat. While Riyadh did not respond to the Abqaiq drone attack in September, Israel did respond to Iran primarily in Syria, where airstrikes in late November hit IRGC targets in response to rocket fire. Israel viewed the drone and cruise missile attack on Abqaiq as having implications for its own security, with potential spillover from a Gulf conflict.

Despite regional tensions with Iran, there is reticence to change the emerging status quo in Israel-Gulf relations. In an interview with the author, former US ambassador to Israel and visiting fellow at the Institute for National Security Studies, Dan Shapiro, says there is real warming of relations, but it is a pragmatic relationship that could be limited. “The warming of relations with Israel and Gulf states is  driven by common threats,” but there is a tendency towards irrational exuberance when some Israelis speak of normalization.

The current challenge for Israel and the Gulf states is that while they have shared threats, they don’t always have the same interests. Oman, which played a key role in suggesting further outreach to Israel, has also been meeting with the US and Iran. Oman is positioning itself as a key country linking the Gulf, Iran, Israel, and the West. While Oman raises its international profile through this shuttle diplomacy, Israel appears to have gotten only limited mileage out of the visit, and there has been no new developments since the spring.

However, Israel wants more indications of growing relations, as seen by Netanyahu’s quick reply to a tweet by the Minister of Foreign affairs of the United Arab Emirates (UAE) in December. “I welcome the closer relations between Israel and many Arab states,” he wrote, after Abdullah bin Zayed al Nahyan tweeted an article suggesting an opening to Israel. Netanyahu wants normalization and some kind of agreement soon.

Israel appeared to get a relatively warm reception in Bahrain at a June 2019 “economic peace summit” pushed by Washington. Afterwards, Israel’s foreign minister met his Bahrain counterpart in Washington in July and Israel sent a  representative to a maritime security conference in October. There also was an interview between Bahrain’s foreign minister and an Israeli journalist. Press reports indicate that after the June conference that Gulf states and Israel are closer after the Bahrain meeting, but full ties are still unlikely. Turkey’s pro-government outlet TRT argued that the meeting represented “Israel’s move toward a more normalized relationship” and that Bahrain had appeared to support Israel’s actions.

Despite the hype of normalization and a “united front” against Iran, much work remains to be done.

Despite the hype of normalization and a “united front” against Iran, much work remains to be done. Former member of Knesset Ksenia Svetlova, a Senior Research Analyst at the Institute for Policy and Strategy at the Interdisciplinary Center Herzliya, stated to the author that there is a lot of potential, but security discussions currently drive the relationship.

The view among some experts is that the path to normalization still hinges on a peace plan with Palestinians, even if a threat from Iran has reduced the immediate importance of a peace deal. It appears under Israel’s current Netanyahu government, now in power for more than ten years, gambling on new peace talks with the Palestinians to get normalization with the Gulf states is not something Israel’s leadership is willing do.

Instead, Netanyahu is content with the current tip-toeing toward more public relations, and maintaining shared interests regarding Iran. Since the 1990s, Netanyahu has been skeptical of any new peace agreement with the Palestinians and has preferred to manage the conflict closer to home than take major initiatives. Being risk averse dovetails with the tendencies in the Gulf as well, because neither Israel under Netanyahu or the Gulf leadership appear to want a large conflagration with Iran, even as they view its moves critically.

Israeli Foreign Minister Israel Katz claims that the United States and Israel have been in discussions about a “non-aggression” initiative with unnamed Gulf states. A change in Israel’s governing coalition might warm relations with Jordan and cause a domino effect in the Gulf. However, the delicate balance is fraught with question marks. Israel-Oman ties have not changed since last year’s visit. Similarly, besides one tweet and a few positive comments or reports of a US-backed non-aggression agreement, there are no major moves.

Israel is stuck in a political impasse with a third election in a year. Iran is trying to get around sanctions via diplomacy and testing US resolve. The key Gulf alliance of the UAE-Saudi Arabia also faces pressure on other fronts from Yemen to Libya to the continuing crises with Qatar. While Israel’s apparent partners are more public about positive views of Israel or openness to visits, the potential remains far from realized. And without more normalization, other forms of deal cannot be realized including economic relations. Sharing the hi-tech successes of Israel would fit well into the Gulf economies.

There are paths forward. Preventing another flare up in Gaza also underpins contacts with Qatar and Hamas. If Qatar patches up relations with Saudi Arabia and the UAE, while Oman eases tensions with Iran, Israel may even find its potential role in the Gulf shifting from the security to political and economic level. Beyond Iranian tensions, the UAE, Israel, Egypt, and Saudi Arabia also share similar concerns on recent Turkish moves in the Mediterranean. Taken together, a growing consensus has emerged, but neither side has a vision for the next major public step.

Seth J. Frantzman is the Executive Director of the The Middle East Center for Reporting and Analysis and author of After ISIS: America, Iran and the Struggle for the Middle East (Gefen Publishing). He holds a PhD from The Hebrew University of Jerusalem and is a former Assistant Professor at Al-Quds University.

The consequences of deteriorating US-Palestinian relations and aid cuts are likely to continue to negatively impact security in Israel.