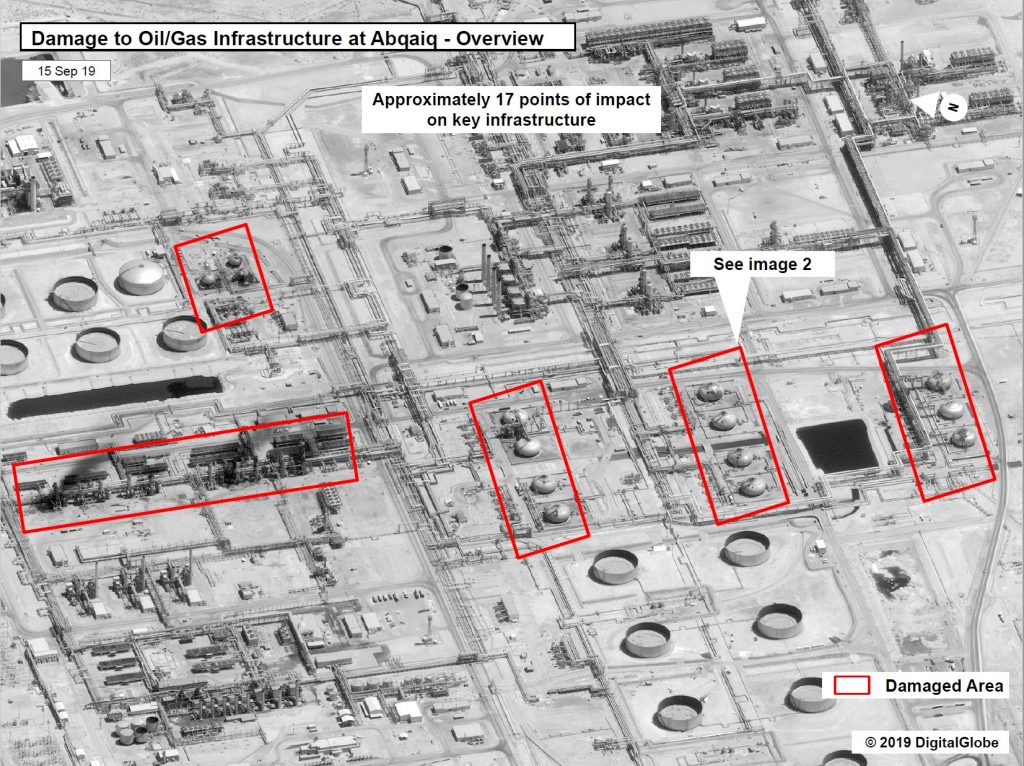 The September 14 aerial attack on the Saudi Aramco oil facilities at Abqaiq shook up oil markets and Mideast experts around the world. It should also shake up complacency about the security of world-class critical infrastructure everywhere within range of Iranian cruise missiles and drones. Whoever attacked Abqaiq—whether Iran, as seems increasingly likely, or its Houthi or Iraqi militia proxies—must have known that they were targeting some of the most strategic critical infrastructure in the world.

I visited Abqaiq during the Obama Administration with US Department of Homeland Security (DHS) Under Secretary Rand Beers, who led both DHS’s critical infrastructure and counterterrorism efforts. I was the DHS Deputy Assistant Secretary for Counterterrorism Policy and had been an associate member of the Society of Petroleum Engineers since 1993. We were part of a series of exchanges between the Saudi and US governments working on better ways to protect critical infrastructure from terrorist attacks. This visit was no hardhat photo op—indeed, at our hosts’ request, we took no photographs.

There are few places in the world that deserve the phrase “critical infrastructure” more than Abqaiq. Abqaiq is more like the Panama Canal or the Santa Monica Freeway than the Port Arthur refinery, which is the largest refinery in North America. If the Port Arthur refinery is shut down—as happens during severe hurricanes—other refineries around the Gulf of Mexico or Texas can temporarily increase capacity to make up the difference.

Abqaiq is more like the Panama Canal or the Santa Monica Freeway than the Port Arthur refinery, which is the largest refinery in North America.

Abqaiq is not an oil refinery. Abqaiq is a gas-oil stabilization facility that is unique in the international oil and gas industry because of its function, location, and scale.

Oil coming out of a wellhead is usually a “hydrocarbon soup” of molecules of hydrogen and carbon. The number of hydrogen and carbon atoms in each molecule determines whether the molecule is a gas, like the natural gas that cooks love to use, or that provides clean power to generate electricity. Cars rely on heavier hydrocarbons like gasoline, and still heavier hydrocarbons make up diesel fuel to power trucks and railroads. Still heavier hydrocarbons are turned into asphalt to pave our roads. Oil refineries take crude oil from tankers or pipelines and separate crude oil into its separate components for cooking, gas tanks, or highways.

What flows directly out of the wells of Saudi Arabia’s Eastern Province includes a mix of lighter and heavier hydrocarbons, along with sulfur and other impurities. Before the oil can be transported safely to a refinery, it has to be stable enough to be loaded onto an oil tanker. The Saudi Aramco facility at Abqaiq provides the vital processing that removes the volatile lighter hydrocarbons, sulfur, and other impurities, stabilizing the remaining crude oil for shipment on tankers going to refineries in China, India, Europe, or North America.

Without Abqaiq’s processing, much of the oil from eastern Saudi Arabia’s prolific oil fields could not be shipped outside of Saudi Arabia.

Just as the oil fields around Abqaiq are among the largest in the world, the gas-oil separators and other equipment at Abqaiq were also built on a larger scale than anywhere else in the world. Many of Abqaiq’s facilities such as their giant spheroids that tower over people as they drive by were custom-built to a very large scale and cannot be easily replaced—certainly not by any off-the-shelf replacements.

The Abqaiq plant was attacked by al-Qaeda in 2006. Guards fired on two suicide vehicles, detonating them before they could do damage. A press report at the time noted “security experts doubt that the plant could be seriously damaged by conventional terrorist weapons like car and truck bombs.” This was, indeed, the impression that I came away with from my visit seven years ago. More recently, an oil analyst referred to Abqaiq as one of the most heavily guarded sites in the world.

Abqaiq has been one of the most heavily protected places on the planet.

Abqaiq is a single point of failure that could remove millions of barrels per day from the global oil market for an extended period if damaged badly enough. It has long been identified as the top security risk worldwide.

The greater fear at the time was a 9/11-style aerial attack. A witness at a Congressional hearing in 2005 warned that if this type of attack occurred in Abqaiq it would be an uncontrollable disaster that “could take up to 50% of Saudi oil off the market for at least six months….”

The scale and accuracy of the attack overcame Saudi redundancy

First, to be clear, the spectacular smoke plumes shown in satellite imagery after the September 14 attack appear not to be from burning oil infrastructure, but almost certainly show spilled oil being burned in an open pit in the desert. The real damage was done to the processing facilities, and here the attackers appear to have known exactly what critical infrastructure they needed to target. The actual damage was to “approximately 17 points of key infrastructure,” according to the annotation on a post-strike image released by the State Department.

Assuming the munitions’ actual points of entry were as shown in a second image released by the State Department, these gas-oil separation spheroids were hit with a precision that rivals what the United States Air Force could do.

Whoever targeted the specific points of attack knew the critical importance of the spheroids. The other targets—the separation towers—were the other vital part of the Abqaiq separation process. They were also hit while the structures near them appear undamaged.

If the spheroids or the towers were in use in the early morning of September 14, the explosion of the warheads—or even the sudden depressurization of the spheroids or towers—would have caused extensive fires and risk to the personnel working at Abqaiq. Pictures taken during the darkness of Saturday morning show exactly that, probably caused by burning gas as well as oil.

It could have been worse

Given the extent of the fires shown on news channels after the attack, the limited amount of damage visible the next morning shows that Saudi firefighters must have made extraordinary efforts to limit the scope of the damage. In contrast, the oil well fires set in Kuwait by Saddam Hussein’s retreating forces in 1991, which I visited in 1998, melted half-inch plate steel as if it was taffy.

Saudi Energy Minister Prince Abd al-Aziz bin Salman announced on September 17 that the Saudis would restore oil production throughput at Abqaiq by the end of September. This probably reflects what will be a massive Saudi infrastructure repair effort, on a scale comparable to what the State of California used to restore the Santa Monica Freeway—another piece of critical infrastructure—after the 1994 Northridge earthquake.

Thinking about critical infrastructure in the Middle East after Abqaiq

Thomas S. Warrick is a nonresident senior fellow with the Middle East programs at the Atlantic Council.

From overtures for US talks to threats of war with Iran

Rejected again and embarrassed by the escalation in the Persian Gulf his policies have incentivized, Trump is likely to make similar belligerent comments this year and US-Iran relations will only worsen.

While Iran’s president and foreign minister laughed at the Russian president’s statement, Putin offer should been seen as a serious one.

Image: A satellite image showing damage to oil/gas Saudi Aramco infrastructure at Abqaiq, in Saudi Arabia in this handout picture released by the U.S Government September 15, 2019. U.S. Government/DigitalGlobe/Handout via REUTERS THIS IMAGE HAS BEEN SUPPLIED BY A THIRD PARTY. NO RESALES. NO ARCHIVES