The June 12 decision by Iraqi Shia cleric Muqtada al-Sadr to renounce his electoral victory and collapse the government formation process is a gift to Iran. It is a blow to average Iraqis—who demonstrated in 2019 for the end of the sectarian political system and were killed for it—and a blow to the United States, which had a chance to help expunge much of the malign Iranian influence that has seeped into Iraq since the 2003 US invasion.

Sadr had won a significant seventy-three out of 329 seats in Iraq’s parliamentary elections in October 2021, outperforming all his Iraqi competitors, but especially the Iranian-backed parties and their militias. He then attempted to do something unprecedented: hold out for a majoritarian coalition and shut those same Shia parties out of government entirely, rather than divide up the spoils.

If Sadr cut Iran-aligned parties out of the Iraqi government, including Iraq’s internal policy forces, it would have been a major blow to Iran’s growing regional influence in the Middle East. Iran values a pliable Iraq more than anything else: the prospect of an unfriendly Iraqi government—or even a nationalistic Iraqi government—would have reoriented Tehran’s political and security efforts in the region. Some of the funds and the attention of the Islamic Revolutionary Guard Corps (IRGC), which flows to Yemen, Syria, Lebanon, and even the Gaza Strip, would then have to be redirected in an epic effort to negotiate a new relationship with Baghdad.

It would also have revolutionized Iraqi politics, where certain militias and their political allies in the government intimidate politicians who stray too far from the line. As it happens, Sadr is one of the very few Iraqi political leaders who is difficult to intimidate. His brand is that of the eternal outsider and opponent of the US invasion, Iran, corruption, and Iraqi elites. However, his real power is that he has had a militia of his own. Saraya al-Salam forms part of the Hashd al-Shaabi—until recently, it almost had the strength to match the Iran-backed portions of the group. Sadr, thus, has the muscle to force a decisive confrontation if he wants.

Sadr’s steadfastness these past eight months since the October 2021 elections was shocking, particularly for a man whose political oscillations are an Iraqi watchword. He was being leaned on very heavily. Iran’s Supreme Leader Ayatollah Ali Khamenei had urged Sadr to drop his project, to join with the Iran-aligned parties, and return to the rule of the great Shia political glob. His coalition partners, particularly the Kurdish Democratic Party’s (KDP) Masoud Barzani, were also under immense pressure. The forces opposing Sadr—primarily former Prime Minister Nouri al-Maliki—had focused on stopping the nomination of the presidency, rigging a series of court decisions: raising the threshold for his election and then disqualifying the KDP’s candidate, Hoshyar Zebari.

To what precise extent Iran controls Iraq is one of the great policy questions of the region and the answer is, broadly, not as much as Iraq’s critics claim, with Sadr’s election being proof of that. But also proof of Iran’s influence is his order for the resignation of loyalist members of parliament. Iran has the most influence in behaviors that hamper the region, such as militias and ballistic missiles. The trouble for Iraqis is that these behaviors are precisely the ones that make Iraq impossible to change, whether to attract greater foreign investment, encourage its bourgeoning private sector, or simply reduce corruption from the top down. The Iranians and their political henchmen have private armies and courts and their government will, thus, elect a new people if they are pressed too far.

A vote for Sadr was a vote for change in Iraq—undisciplined, highly erratic change, certainly, but change, nonetheless. His victory was not a full endorsement of the October 2019 demonstrators, but also due to a reordering of the electoral system and thus ephemeral. His bloc gamed the elections best.  But he had seized the mantle of the protestors even with partial consent.

His current strategy is risky: he will almost certainly be making a play for early elections, though it’s unclear how much better he could do than in October 2021. Sadr may be feeling stronger after some action in this parliamentary session, including passing a food security law that will appeal to the poor and an anti-normalization law to fend off critics from the Iran-backed parties. He may also want to bait Maliki and the opposition into forming a government, instead, and be saddled during a hot and underemployed summer in Iraq with sandstorms and power outages. But the opposition isn’t foolish and will likely accede to early elections after a period under the current government—if they are asked.

It was a mistake for the Joe Biden administration to keep Iraq at arm’s length these past months. The administration has deployed minor US officials and made anodyne statements about the will of the Iraqi people. That reflects conventional wisdom: that a more visible US presence can only arouse Shia opposition and harm those nationalistic Iraqis whose victory would help net-US interests. It isn’t popular for Sadr, after all, to have US Secretary of State Antony Blinken touring Baghdad and advocating on his behalf. But there is still room to compete with Iran, which now has the outcome it wants.

For example, the Biden administration should have done more to condemn the series of attacks on Iraqi Kurdistan this spring, including a barrage of a dozen missiles on March 13. This could have included at least sending a senior American official to the Iraqi Kurdistan region. They should also have expressed privately, at a high level, American unhappiness with the Iraqi courts stonewalling the choice of president on February 6. It is possible this happened, though, given the lack of high-level involvement or attention to this process, it is unlikely. Of course this would be portrayed as interference in Iraqi sovereignty, but compared to, for example, Iranian and Turkish violations of sovereignty, the bar is low. Many Iraqis understand this.

Above all, the Biden administration should have been down in the mud of Baghdad politics, just as the Iranians and the IRGC were, cajoling and demanding from political leaders to do more. Iran treats Iraq as a zero-sum political battleground of immense stakes, and so must America if it wants to help—Iraqi leaders can seem bemused when it doesn’t.

The difference between America’s strategic tools—its foreign and military aid to Iraq—and its tactical influence—the ability to sway decision-makers—is the greatest challenge to US policy In Iraq. Iran has poor strategic tools and its economic aid is negligible, though there is plenty of licit and illicit trade. Nevertheless, Iran’s tactical tools are immense, since its agents can and will threaten to kill individuals if they vote the wrong way—or say the wrong thing.

America’s profile is precisely in reverse. There is precious little personal incentive for individual ministers and politicians to accede to an American demand, especially if it infuriates the Iranians. America is resource-rich in strategic incentives for the nation, but very poor in its ability to make a single person’s life better. That leads to a collective-action problem, where it is better for the Iraqi state to cooperate with the US but for individual political leaders to help Iran—and, usually, the latter outweighs the former.

In any case, the United States was absent from the latest Iraqi political drama again, leaving its Arab allies adrift. That was a loss for Washington, but even more so a loss for Iraqis and the majority who voted for change.

Dr. Andrew L. Peek was Deputy Assistant Secretary of Iraq and Iran at the State Department from 2017-2019. 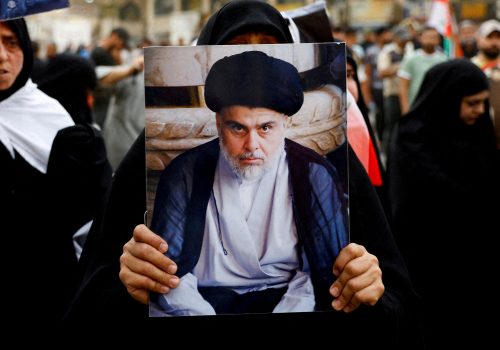 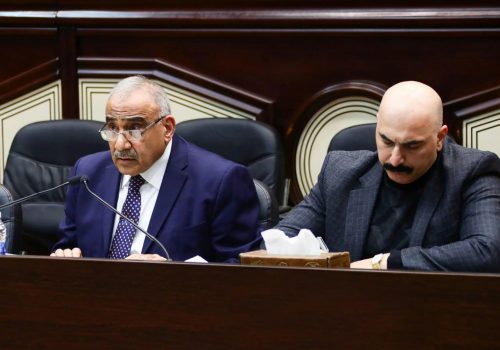 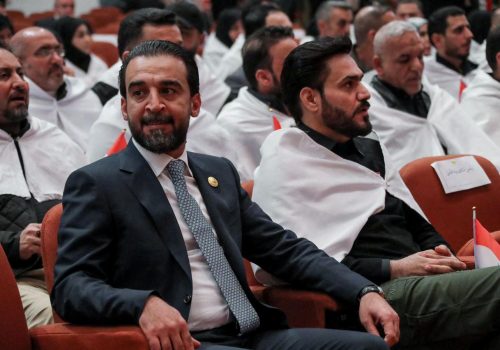 Iraq is forming a new government. But getting there will be complicated.

Whatever the outcome of the ongoing negotiations, the prospects of the next Iraqi government will depend on the conditions of intra-Shia relations.