In March 2021, Tawazun, the United Arab Emirates’ (UAE) defense and security acquisitions authority for the armed forces, and Turkey’s Baykar Defense, the manufacturing company of the renowned indigenous Bayraktar TB2 drone, held discussions on possible cooperation. The talks continued for a few months before the Emiratis introduced a mouthwatering $2 billion offer. The deal included Abu Dhabi’s request to meet a shopping list of 120 TB2 drones, ammunition, command and control units, and training.

The news came in light of discussions on taking defense cooperation between the two states to the next level. On September 21, Turkey reportedly delivered twenty of its Bayraktars to the UAE. A senior Turkish official confirmed that his country had delivered some drones and that Abu Dhabi was indeed seeking more. Many observers that I spoke to found this development on the defense and military level quite surprising for two primary reasons.

First, TB2 production lines are fully occupied after hitting their maximum capacity with the start of the Russian invasion of Ukraine in February. According to Baykar’s CEO, Haluk Bayraktar, the Turkish drone maker is fully booked for three years. Although Ankara is working to increase its production capacity amid the rising international demand for its TB2, there is no room at the moment to meet surprising and unscheduled needs swiftly.

Another reason is the UAE’s assertive foreign policy and experience with Chinese drones. It presumably suggests that Abu Dhabi could use the Turkish drones in a way that contradicts Ankara’s regional interests or even pass them to third parties that could threaten such interests. In this sense, one can recall a precedent during which Libyan warlord General Khalifa Haftar, accused of committing war crimes, used UAE-acquired, China-made Wing Loong drones against the United Nations-recognized and Turkey-backed Libyan government in Tripoli in 2019.

The fact that Baykar Defense decided to deliver Abu Dhabi twenty of its flagship TB2 drones despite the circumstances in Libya means that Turkey attaches great importance to the Emirati offer, and the two parties resolved the concern related to the nature of using the Turkish drone. The Turks did not want to lose the deal. However, they did not deliver all that the UAE asked for either. This strategy should keep both sides engaged in defense talks for quite some time.

In 2011, Abu Dhabi and Ankara signed a memorandum of understanding (MoU) on defense industry cooperation. The MoU was ratified in 2017. Although the UAE has remained one of the top importers of Turkey’s defense equipment in the last decade, no significant progress has been made on defense industry cooperation. However, the possible realization of a $2 billion deal is undoubtedly a departure from the traditional trend.

Following the normalization of relations with Turkey in February 2021, the UAE expressed its intention to fast track the cooperation on the level of defense. This resulted in the two parties signing a letter of intent in defense industry cooperation that set up regular meetings between their representatives to define areas of cooperation and follow up on outcomes. During a meeting with the Justice and Development Party’s (AKP) Central Executive Committee in July 2021, Turkish President Recep Tayyip Erdogan uncovered that the UAE offered to build a factory for the TB2 in Abu Dhabi. But why Turkish drones in particular? And what is the justification for buying 120 units or even building a factory?

The UAE’s drone force depends mainly on some aging US drones as well as modern Chinese versions. Abu Dhabi’s inventory of drones includes MQ-1 Predators, the export version of the RQ-1 Predator (which is incapable of carrying weapons), and Chinese Wing Loong I and Wing Loong II drones. Most of these drones are intended for intelligence, surveillance, and reconnaissance missions.

Concerning drones acquired from the United States, the UAE requested to buy the superior MQ-9 Reaper two years ago, but Washington suspended its request in 2021. As for the Chinese drones, although the Wing Long II, capable of carrying multiple types of ammunition, has been promoted as the cost-effective alternative to the US-made MQ-9 Reaper, its performance has been modest. Compared to the Turkish TB2, although bigger and heavier, the Chinese drones did not shine. Several buyers have expressed disappointment with the performance of China-made drones.

In this sense, buying Turkish drones would diversify and modernize the UAE’s inventory. Additionally, acquiring Turkish unmanned combat aerial vehicles (UCAVs) would serve the UAE’s current strategy of investing in and developing autonomous capabilities, electronic warfare capacity, and smart munitions. Looking for technology, expertise, and equipment from major advanced suppliers beyond the US means building a working relationship with Turkey.

Motives behind the deal

Despite its importance, the diversification motive does not alone offer a comprehensive answer as to why the UAE would ask for 120 Turkish drones or even offer to build a factory to produce them. A host of political, business, and defense-related reasons might help clarify the motives behind the mega Emirati offer.

First, it’s worth considering the TB2’s performance in untraditional military confrontations as well as hybrid warfare. What makes Turkish drones extremely desirable to customers from around the globe is that it is generally a highly-efficient military system at low cost. It has been battlefield-tested in several critical geopolitical theaters of different hostile circumstances and environments. Despite some limitations on its operational range with the absence of enough ground stations and its dependence on them instead of satellite communications, the TB2’s performance is sufficient to provide Abu Dhabi a meaningful new drone fleet.

Second, the deal serves as a message to the United States: “If you do not sell us weapons, we will get them from elsewhere.” During the Donald Trump administration, Abu Dhabi asked to buy Lockheed Martin F-35 fighter jets, General Atomics Aeronautical Systems Inc. (GA-ASI) MQ-9 Remotely Piloted Aircraft (RPAS), and other equipment and munitions with an estimated value of $23 billion. Although the Trump administration initially agreed to proceed with the ask, the Biden administration later suspended the deal, including up to eighteen MQ-9B and related equipment reportedly worth $3 billion.

Third, Abu Dhabi’s deal should not be solely seen from a technical perspective. A $2 billion offer is meant to buy Emirati influence inside Turkey and create strong working relations with political institutions and the rising defense industry based on shared interests and threats. Recently, the UAE and Turkey have been facing an increasing threat from the expansion of the Iran-backed Shia militias in their neighboring theaters. The TB2 has proved to be a pretty compelling offensive platform against highly-valued military assets, armed groups, and militias.

Following normalization relations with Ankara, the UAE has displayed its financial power and deepened its business ties with Turkey. The defense industry sector is one arena where Abu Dhabi can meet some of its defense needs and simultaneously make business and profit.

As for Turkey, bearing in mind the significance of the possible realization of a $2 billion deal, it probably had several delicate matters to consider before cautiously proceeding. One of the problematic issues is that selling 120 drones at once to the UAE—even if they are available—would alter the delicate military balance within the Gulf Cooperation Council (GCC), especially with Qatar and Saudi Arabia. By delivering twenty TB2s in September, however, Ankara still had the chance to test others’ will to buy more of its drones and even stimulate them to do so without seriously undermining the balance within the GCC.

Ultimately, the UAE and Turkey probably consider the current formula under which they executed the TB2 deal a win-win situation. Turkey showed that it could secure UAE’s defense requirements even in unique or urgent times. At the same time, Abu Dhabi proved that it could put its money where its mouth is in terms of opening a new page with Ankara and boosting bilateral relations.

Ali Bakir is a nonresident senior fellow with the Atlantic Council. He is also an assistant professor at Qatar University. Follow him on Twitter: @AliBakeer. 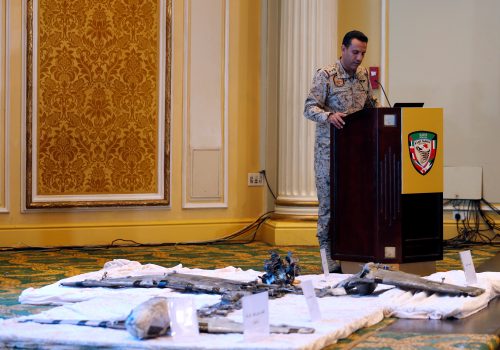 Iran’s drones are a buzzing menace for Saudi Arabia

The small but sophisticated Iranian-made armed drones have undercut the security balance in the Gulf region and the Arabian Peninsula over the past few years, ushering in a novel asymmetrical menace. 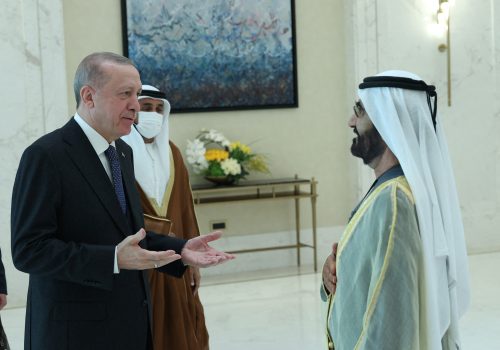 Turkey and the UAE are getting close again. But why now?

Turkish President Recep Tayyip Erdogan’s February 14 visit to the UAE indicates that rapprochement is well underway. Strategic and economic factors are behind this shift and many benefits can come from closer ties. 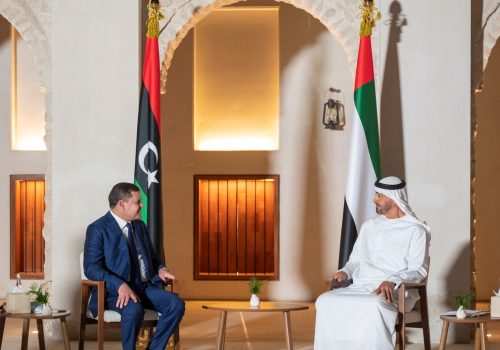 The UAE is making a precarious shift in its Libya policy. Here’s why.

As an influential actor in the Libyan landscape for over a decade, it comes as no surprise that changes in Emirati policy have had a direct impact.

Image: An engineer from Turkish drone-maker Baykar stands next to a TB2 drone during the first day of SAHA EXPO Defence & Aerospace Exhibition in Istanbul, Turkey, November 10, 2021. REUTERS/Umit Bektas