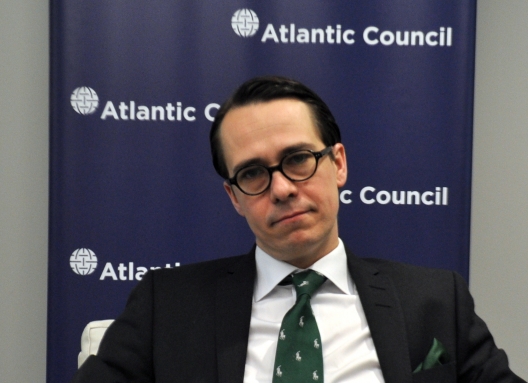 During his trip to Washington to meet with Secretary of Defense Chuck Hagel, Finnish Defense Minister Carl Haglund sat down for an exclusive interview with Director of NATOSource Jorge Benitez. They discussed cooperation between the US and Finland, missile defense, European security, NATO Partnerships, and the upcoming NATO summit in Great Britain. Below are excerpts from their conversation. Afterwards, Minister Haglund delivered a public speech at the Atlantic Council on “Regional Defense Cooperation and the Transatlantic Link.”

Minister Haglund: We have a lot of positive things going on. Only this week we had US marines exercising in Finland in Arctic warfare. In addition, our air forces are planning to intensify their common exercises in the North. These are very concrete examples of win-win solutions for intensifying cooperation that benefit both parties. In fact, we will be launching some new decisions later on today, when we are going to buy more material from the United States. It’s no secret that Finland is a country that is very keen on maintaining a credible defense, so we are very dependent on partners like the US to deliver credible solutions to us.

We want to be a partner that is not only consuming security, but also producing security. We believe that we are, in that sense, a good partner for the United States and other like-minded nations. Other examples where we have common aims and goals include the destruction of chemical weapons in Syria and Afghanistan. Many developments suggest that in order to uphold credible defense solutions in Europe as a continent, we are going to need more cooperation (regional, bilateral, and multilateral), I am certain that US-Finnish cooperation is part of that solution.

Dr. Benitez: You mentioned the destruction of chemical weapons in Syria. Some of your Nordic neighbors are participating in that mission. What is Finland’s role in such an important international operation?

Minister Haglund: We are in there but our contribution is more specified. We have sent a team of 8 Finnish experts. They are already on the ships. They are a trained CBRN [chemical, biological, radiological, and nuclear] team that specializes in handling the substances being moved from the port and loading the chemicals onto the ships. The Finnish team is conducting this very sensitive phase of the international mission.

Dr. Benitez: This is an important mission and it’s great to learn more about Finland’s contribution to its success. While Europe has focused most of its attention on internal economic problems, there have been significant changes in the security environment around Europe in the last two years. As Finland’s minister of defense, what do you see as the main threat to European security?

Minister Haglund: First of all we have so-called new threats, some of them are more new than others. We have cyber first of all, something where a lot of European nations have work to do in order to be on top of things. We have terrorism. We’ll see what happens in Sochi. I think it’s very good that the Americans and the Russians are cooperating on the security of the Olympic Games in Sochi. And then just these past few days we have developments in Ukraine, where we can see also conventional violence due to political discrepancies between a big group or part of the people and the regime, leading to very sad, violent developments. So we have that type of more traditional security challenges popping up. On top of that we have developments in the Arctic. I don’t see it as a security threat though; I just see it as a sort of change in focus on the Arctic. We also have environmental challenges. So we have a lot of different concerns.

In addition, we have unfortunately a sense that there is a little taste of Cold War rhetoric between the NATO countries regarding missile defense. At the same time, the Russians are making some sort of counter move building up their missiles system, possibly putting Iskander missiles in Kaliningrad. These actions seem like Cold War behavior and I don’t feel that that’s necessarily a good thing for Europe, to be honest. Without pointing a finger at anyone but it’s not a very fruitful development. So we have a lot of tensions that should be addressed.

Dr. Benitez: Last month the leaders of the EU met on a rare summit on defense and security issues. What decisions on European defense did you find most encouraging from that meeting?

Minister Haglund: Well I think the most important thing is that there actually was a meeting on this topic and that in itself was a historical accomplishment. Thanks to the December meeting, these issues, that are very topical, were brought on the agenda of the heads of state on a European level for the first time in years. In my view, the outcome of the meeting was better than I had expected. Some may have raised their expectations too high for the EU summit, but I think that we succeeded quite well. One very important step was that we all agreed that we would get back to the topic in one and a half years.

Furthermore, leaders agreed that the new European commission, which will be set next fall, will be working on a security strategy for the European Union. This will be a key job for the new high representative who comes after Lady Ashton. There were also some very positive steps taken concerning the development of the defense market, where we have a lot of protectionism that is not very helpful for Europe. In addition, we had good decisions on developing the European battle groups, where development is definitely needed.

At the same time I think it’s important to say that I’m one of those who still want to remind people of the fact that the European Union will never become the primary forum of defense cooperation in Europe. NATO will always be the primary forum. And these decisions are steps where the EU can do complementary work to what NATO is doing. I’m also very keen on, even though we’re not a NATO country, that we don’t start doing parallel work. Hence, there are a lot of restrictions on what the EU can or even should do.

Because of budget constraints, Europe is acting very protectionist. Even though they are allies, we still see countries doing things 28 times in Europe, instead of doing things together. There is a need for more cooperation in Europe, both within the EU frame and the NATO frame.

Dr. Benitez: Continuing to discuss NATO, relations with partners will be one of the top issues in this year’s NATO summit. Finland was one of the 13 partners invited to a special event in the last NATO summit in Chicago. What are some of the ways NATO can best improve its relations with its international partners and Finland in particular?

Minister Haglund: Well this is a very important question. I have to first say that I hope there will be an opportunity for us to take part in the event in Wales in the Fall. There has been an active initiative from Sweden (backed up by Finland) on developing NATO’s partnerships. There are a few active partners that are participating in NATO operations and are very involved in the NRF, (NATO Response Force). I think there’s mutual interest in keeping active partners (such as Finland, Sweden, and Australia) closely involved in NATO activities. This is an issue I will raise with Secretary Hagel later on today because it is very important for us.

I’m very keen on the fact that Finland is a contributing nation. I’ve said it before, we are a nation that produces security in Europe, rather than consumes it. It’s no secret that a lot of European nations are too dependent on the US in defense and security questions. I claim that we are actually one of those who are bringing a lot to the table. I feel that that is something that is recognized, and I hope that will continue in the future. We will never become a free-riding nation. I’m not saying that anyone else is, but some people have claimed that some are. I am not going to go into that debate, but I think that this is an issue that we will continue to raise in various contexts and we are very keen on being present at the summit to discuss these issues.

I am very happy with the activities of the United States in this regard, that the US has been backing up the Swedish-Finnish initiatives very positively. I’m sure we can find a model for developing the role of active partners before the summit in Cardiff. So we’ll see that it’s an important agenda for us over the coming year.