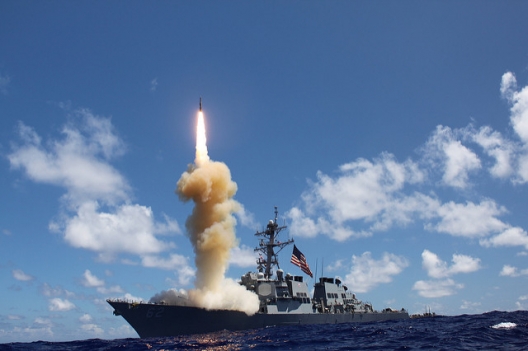 From Vanessa Gera, AP:  A U.S. missile defense system aimed at protecting Europe from ballistic missile threats is moving into higher gear this week, with a site in Romania becoming operational on Thursday and officials breaking ground at another site in Poland a day later.

The system has been under development for years and is, NATO and U.S. officials say, aimed against potential long-range threats from the Middle East, mainly with Iran in mind. Yet Russia is adamantly opposed to having the advanced military system on its doorstep and the development is certain to further exacerbate tensions between Russia and the West that are more strained that at any time since the Cold War….

“For us to discount or ignore that very real missile threat would be irresponsible,” Romero said….

U.S., NATO and Romanian officials will hold a ceremony Thursday to mark the start of operations of the site in Deveselu, a village in southern Romania, with NATO Secretary General Jens Stoltenberg due to deliver a speech. A day later Polish and U.S. officials will take shovels in hand to break ground at a planned site in the Polish village of Redzikowo, near the Baltic Sea. It is set to go online in 2018.

Both sites will be part of a system dubbed the European Phased Adaptive Approach, nomenclature indicating that its capabilities will grow as different elements become operational.

From Robin Emmott, Reuters:  “We now have the capability to protect NATO in Europe,” said Robert Bell, a NATO-based envoy of U.S. Defense Secretary Ash Carter. “The Iranians are increasing their capabilities and we have to be ahead of that. The system is not aimed against Russia,” he told reporters, adding that the system will soon be handed over to NATO command….

The shield relies on radars to detect a ballistic missile launch into space. Tracking sensors then measure the rocket’s trajectory and intercept and destroy it in space, before it re-enters the earth’s atmosphere. The interceptors can be fired from ships or ground sites.

The Russian ambassador to Denmark warned a year ago that Danish warships would become targets for Russian nuclear missiles if Denmark joined the shield project by installing radars on its vessels. Denmark is upgrading at least one frigate to house a ballistic missile sensor.

Turkey already hosts a U.S. radar and the Netherlands has equipped ships with radars. The United States also has four ships in Spain as part of the defenses, while all NATO nations are contributing funding….

First agreed by the U.S. government 2007 and then canceled and relaunched by the newly-elected U.S. President Barack Obama in 2009, the missile defense shield’s stated aim is to protect North America and Europe from so-called rogue states such as Iran and North Korea. That is part of a U.S. strategy that includes missile interceptors in California and Alaska.

Ballistic missiles, which differ from cruise missiles because they leave the earth’s atmosphere, can travel distances of up 3,000 km (1,875 miles).