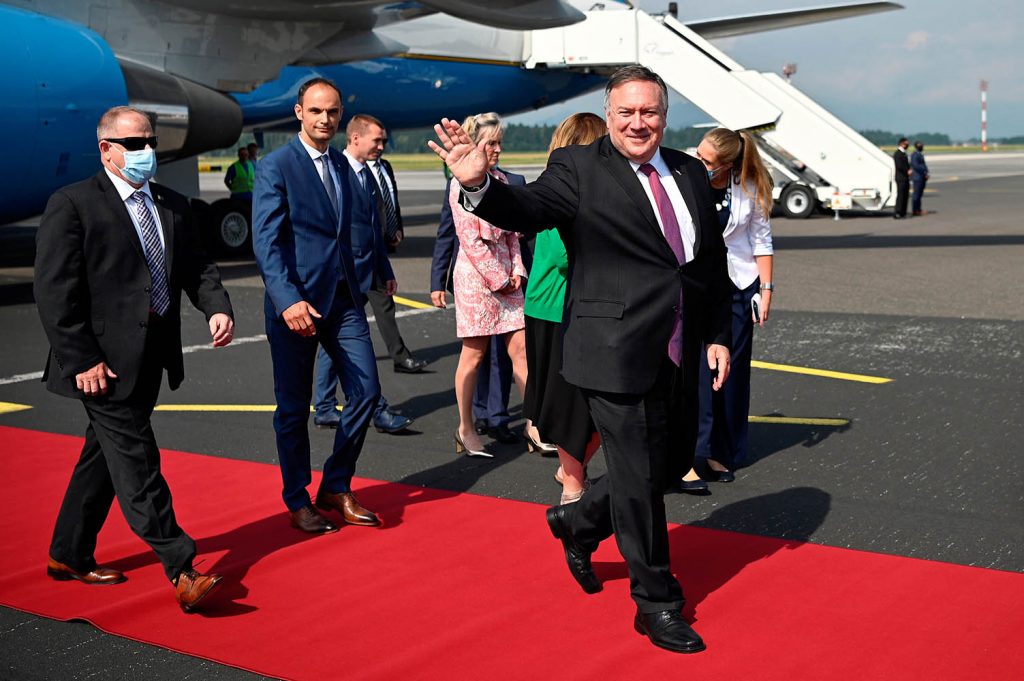 China featured high on the agenda for US Secretary of State Michael Pompeo’s visit to the Czech Republic, Slovenia, Austria, and Poland. And no wonder: Beijing has been making inroads in Central and Eastern Europe (CEE) with investments and economic incentives through its Belt and Road Initiative (BRI) and its “sixteen-plus-one” engagement strategy. In seeking to further roll back China’s influence, the US has targeted Huawei as the Shenzhen-based telecoms-equipment manufacturer competes for a prominent role in the region’s cellular network infrastructure and 5G expansion. The United States deems this not only a geopolitical challenge but a concrete security threat.

Pompeo made China’s 5G strategy a top issue on his first stop in Prague and suggested that “the tide is… turning against untrusted 5G networks” after meeting Czech Prime Minister Andrej Babiš. In Ljubljana, Pompeo signed a joint declaration with the Slovenian government to ban unsafe actors from 5G development—not so inconspicuous code for excluding Huawei from future telecoms infrastructure. Even if he faces less enthusiasm in Warsaw and Vienna for concrete steps to reverse Huawei’s existing enmeshment in each country’s networks, the Polish and Austrian governments will likely show more openness to US concerns than previously anticipated.

The increasing alignment by CEE countries around the US position is due, in part, to recent European Union (EU) guidance on 5G security. In January, the EU released a toolbox to help member states identify high-risk vendors as they build out their 5G networks. The measures do not name Huawei explicitly, but demonstrate a growing consensus within the EU over the potential risks Chinese suppliers pose to European cybersecurity.

Still, Pompeo’s overly narrow focus on 5G and containing Huawei in CEE—as valid as the security concerns may be—risks missing a much bigger challenge. The CEE region and technology frontiers beyond 5G are two of the major arenas in which great-power competition will play out. To effectively counter China’s influence in these areas, the United States should consider ways to broaden its narrative and embrace the countries of Central and Eastern Europe as strategic partners.

In Central and Eastern Europe, Chinese influence extends beyond 5G infrastructure—a reality overlooked by the US fixation on Huawei. To truly develop a defensive strategy and even transition to offense, the United States should push to educate its CEE partners on the risks of Chinese investment. As European public opinion on China worsens, the United States should seize the opportunity to build a strategic partnership with the CEE region to drive innovation. A number of CEE countries are already among the leaders in key areas such as cybersecurity and artificial intelligence (AI). And as Europe’s frontier with Russia, the CEE region has painful memories of, and a heightened sensitivity toward, great-power meddling. If stronger regional entrepreneurship materializes, China will no longer be able to buy influence in Central and Eastern Europe and will, instead, be forced to compete with CEE companies.

To drive innovation and mitigate Chinese influence over global norms, the United States should prioritize its strategic partnership with Europe to develop global rules on key digital technologies and their application. Current transatlantic disagreements distract from China’s attempts to corner critical domains in the global economy and shape future technology standards. As the United States and Europe clash over regulation—from data-sharing to content removal, taxation, and the development of AI and cloud technology—China is advancing alternative rules, standards, and behaviors that align with authoritarian objectives.

CEE countries are natural allies in helping the United States stake out a common transatlantic position on digital rules and regulation. Actors in the region are more skeptical of the instinct of other EU member states to regulate the domain, viewing excessive rules as an impediment to innovation and entrepreneurship. Such an engagement strategy could encourage more dynamic digital innovation while mobilizing indigenous opposition to undue foreign influence. Moreover, expanding the conversation to highlight the region’s role as a policy influencer and digital innovator will also help to engage CEE countries that are marginalized by the overly narrow focus on 5G, including Hungary and Slovakia—two countries that were excluded from Pompeo’s trip.

The United States should leverage the Three Seas Initiative (3SI) to build this consensus with Central and Eastern Europe. The 3SI is a regional effort designed to facilitate interconnectivity and boost economic development between EU member states in the Adriatic Sea, Baltic Sea, and Black Sea region. The next Three Seas Summit, scheduled to take place in Tallinn, Estonia in October, is expected to focus on digital transformation and infrastructure. Furthermore, the recent addition of the Three Seas Initiative Investment Fund—a dedicated commercial fund to invest in critical-infrastructure projects, including digital infrastructure—provides context for the United States to endorse open, competitive economic markets and policies that foster digital innovation. Moreover, the Three Seas Initiative at its very core blends the dual motivations of geopolitical resilience and economic opportunity. This powerful combination is missing from the current narrow focus over who gets to build CEE’s 5G—and over who covers the sunk costs of reversing existing Huawei infrastructure.

Through closer collaboration with the European Union, with the CEE countries at its heart, the United States can more effectively address Chinese influence in the region and strengthen transatlantic leadership in setting global rules in the technology space. As a bonus, enhancing the entrepreneurial environment in Central and Eastern Europe will create opportunities for private partnership and foreign investment. Not only can the United States and Europe win the great-power competition by working together, the transatlantic community stands to profit.

Eileen Kannengeiser is a project assistant at the Atlantic Council’s Future Europe Initiative.

The battle for 5G leadership is global and the US is behind: The White House’s new strategy aims to correct that.

The West has fallen behind in the competition for leadership of the 5G transition, a reality that has huge economic implications and also risks the West facing the reality of a global telecommunications backbone that not only has serious security flaws, but is also shaped by political values incompatible with our own. A new White House strategy aims to close the 5G transition gap.