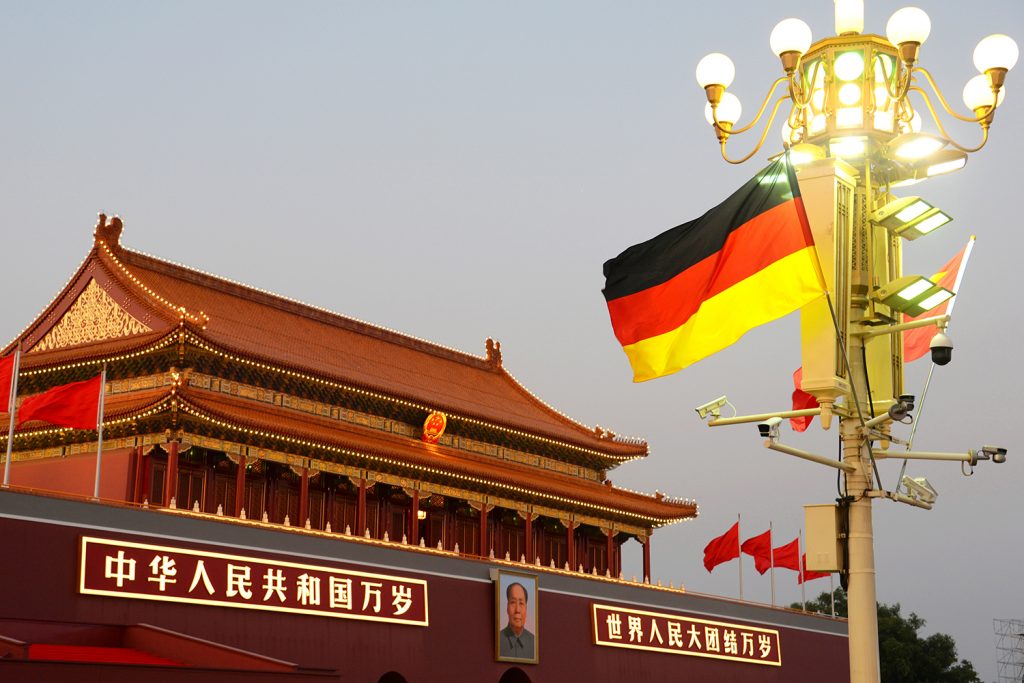 “Can you trust the American leadership? Isn’t China possibly more reliable than the United States?”

That’s not a line from a Chinese Communist Party mouthpiece, but rather a rhetorical question from Volker Perthes, director of Germany’s most important foreign policy think tank, the Institute for International and Security Affairs, which advises the federal government. Perthes went on to list the Trump administration’s many instances of global disengagement (withdrawing from the Paris climate accord, the Intermediate-Range Nuclear Force Treaty, and UNESCO) and implicitly answered his own question with a resounding yes.

Something seems rotten in the state of Germany. Having been a central battleground between democracy and communism during the Cold War, the country is embarrassingly quiet in the US-China hegemonic conflict. Under the leadership of the Christian Democratic Union (CDU), Germany has avoided picking sides. Berlin has shied away from taking a tough line on Chinese human rights abuses and opposes excluding Huawei from its 5G network, while continuing to enjoy the US security umbrella. Germany’s economic interests and political skepticism of the United States have stopped it from joining the fray, but the time could be coming where Berlin and Washington look to join forces again.

Germany’s business model is not made for a world in geopolitical disarray. Since the end of the Cold War, Germany has been one of the greatest beneficiaries of the US-led international political and economic order. Living comfortably under the US security umbrella, Berlin has not had to take responsibility for geopolitical affairs, providing it the freedom to focus exclusively on advancing the country’s commercial interests. While the United States was the world’s policeman, Germany became the world’s salesman. Before the coronavirus crisis, overseas revenue accounted for almost 80 percent of Germany’s thirty DAX-listed companies. Germany has consistently run the world’s largest current account surplus and nearly 56 percent of its manufacturing sector jobs are linked to exports. This has made Germany vulnerable to international friction, as geopolitical conflict is bad for business. When I asked a member of the German diplomatic corps about Berlin’s failure to criticize China’s dubious imprisonment of Canadians Michael Kovrig and Michael Spavor, his answer was simple: it would endanger our economic interests.

Decoupling from China, as the United States is advocating, is not a feasible strategy for Germany. Its global economic entanglements and dependence makes Berlin unwilling to reduce, let alone cut-off, any trade relations with either China or the United States. Berlin will not join a US strategy to completely decouple from China, especially when the only goal seems to be to keep China down.

Growing mistrust across the Atlantic

Berlin’s reluctance to join the US push against Beijing is also motivated by its deteriorating political relationship with Washington. US-German relations are at a low point, for which both sides are to blame. While many Germans might be asking themselves whether China is a more reliable partner than the US administration, they fail to actually look in the mirror and ask whether Germany is a reliable partner to the United States. Germany is failing to meet its NATO defense spending obligations, it’s not reducing its current account surplus, it’s so far not excluding Huawei from its 5G network, and it is still allowing the construction of the Nord Stream 2 gas pipeline despite Russia’s invasion of Ukraine, the murder of a Chechen in Berlin, and the poisoning of Russian opposition leader Alexei Navalny.

None of these contentious issues are particularly new. Previous US administrations have continuously tried to push Berlin to act—to no avail. What has changed under the Trump administration isn’t really the substance, but the style. Trump has approached Germany with viciousness, vitriol, and threats. He has expected Germany to blindly follow the US lead as a vassal.

In his recent op-ed, Thomas L. Friedman rightly argues that this approach has alienated rather than encouraged Germany to pushback against China. However, it does not stand to reason that a more diplomatic, outreach-oriented approach would have been any more successful. After all, that approach had been employed by previous administrations without any notable success.

The situation now has reached such a poisonous level that any accommodative move towards the other side by either capital could be considered a concession by domestic critics. US Secretary of State Mike Pompeo argues the United States is leading a free democratic alliance against China, but that is not the case right now. In a free democratic alliance, allies would together, on equal terms, discuss the general approach and strategy. Instead, the Trump administration expects allies to blindly do as their told; that’s neither free nor democratic.

Time for a change?

The upcoming US and German elections could offer a window of opportunity to relaunch transatlantic relations, with at least one, if not two, new leaders on both sides of the Atlantic. Many actors in the German political establishment have started to understand—perhaps indeed due to the Trump administration’s aggressive style, but also because of Beijing’s new diplomatic aggression—that new geopolitical realities mean that business-as-usual is not an option anymore with China. The “pro-engagement with China” camp in Germany, led by Chancellor Angela Merkel, is on the wane. The need to consider geopolitics alongside economics is gaining traction, as well as the need for more military spending. Simultaneously, the US approach towards Germany should change, as when you treat your allies like vassals, you risk losing them.

The United States and Germany need to find a common foreign policy approach towards China. The goal of such a strategy should not be to keep China down, but rather strengthening democracy worldwide to contain China, which would be a better positive narrative to entice German participation. This can range from establishing a league of democracies, to forming supply chains that evade autocratic influence. Such a strategy wouldn’t engage in full decoupling with China, but instead pursue a two-pronged approach: selective decoupling in areas of high national security, such as 5G, alongside intensive coupling with other states in the world. China’s growth as a global power is partly due to it pursuing such a strategy. Its Belt and Road Initiative is a geo-economic coupling strategy that ensures everybody is connected to, and ultimately dependent on, Beijing. Connectivity is power and the transatlantic alliance needs to counter Beijing with its own geoeconomic networking and attraction strategy, winning hearts, minds, and allies.

Such a strategy could help meet Germany’s economic wishes too. Expanding and intensifying trade, technology, and economic flows with states in Southeast Asia, Africa, or Latin America would help diversify Germany’s economic relations. Japan is a case in point. Tokyo is diversifying its supply chains, enticing companies to reshore production back to Japan, and increasing its economic resilience. It’s not decoupling from China and it seems to be able to continue its economic diversification without incurring any Chinese retaliatory measures. Germany is starting to take a page out of the Japanese playbook. In its recently published Indo-Pacific strategy, the German federal government actively expresses the desire to reduce dependencies via diversification.

After much too long a time, the political climate towards China and Russia is finally starting to change in Berlin. This is an opportunity for the United States and Germany to re-engage and turn Germany from a weak link in the transatlantic alliance to a reliable partner.

Roderick Kefferpütz (@Rkefferputz) is deputy head of unit for strategy at the State Ministry of Baden-Württemberg. He’s a member of the Atlantic Council’s US-Germany Renewal Initiative. The views expressed are his own.

Capitalizing on transatlantic concerns about China

Beijing is pursuing a China-centric strategy aggressively and in a fashion that is causing significant collateral damage to nations around the globe. Thus far, the transatlantic partners have no comparable strategy to counter these challenges. A new transatlantic approach is needed.

Beyond 5G, Central Europe will be key to countering Chinese technological influence

In seeking to further roll back China’s influence, the US has targeted Huawei during its CEE visit as the Shenzhen-based telecoms-equipment manufacturer competes for a prominent role in the region’s cellular network infrastructure and 5G expansion.

Speaking at an Atlantic Council Front Page event, Morawiecki argued that “the NATO alliance is so important for the world to keep peace,” that allies must continue to work toward “consensus” in their actions.