On Monday, October 18, at the age of eighty-four, General Colin Powell passed away from COVID-19 complications amid a battle with multiple myeloma and Parkinson’s disease.

For Powell, it was a struggle against a determined enemy that couldn’t be defeated by his usual weapons of strategic logic, remarkable charm, engaging humor, and powerful empathy for those who face the greatest challenges with the most optimism.

Ahead of his memorial service on Friday at the National Cathedral, I wanted to share four ways that he profoundly impacted the Atlantic Council and will continue to do so.

First, he helped galvanize our commitment to next-generation leadership training; second, his so-called “Powell Doctrine” (often misrepresented) of “decisiveness” informs the work we do on US strategy; third, at a time when we are so focused on diversity and equity, his life’s lessons are all the more powerful; finally, his “Thirteen Rules to Live By” are an excellent recipe for our Atlantic Council culture, which has long held that optimism drives outcomes.

1. Next-generation leadership: Toward the end of a lengthy chat I had with General Powell in the study of his home, he cut off yet another one of my questions on world affairs.

“You know, I spend less time these days thinking about geopolitics and more time preparing the next generation of leaders,” he said. “I can’t predict what might happen in the world in the years ahead, but I do know that we are going to need a very special group of young leaders who are equipped with the character and capabilities to deal with this challenging world.”

His commitment to serving future generations was concentrated most in his work with the Colin Powell School for Civic and Global Leadership at the City College of New York.

That said, he also inspired the Atlantic Council to build out its next-generation efforts on three fronts: our Millennium Leadership Program, our Young Global Professionals paid internship program, and the mentoring of our own staff, 65 percent of whom are under thirty-five years of age.

2. The “Powell Doctrine” of decisiveness: General Powell was complimented and bemused to have a doctrine named for him, though he was never quite sure how that happened.

The Powell Doctrine, which exists in no military manual, emerged in late 1990 after President George H.W. Bush, on the recommendation of Powell and General Norman Schwarzkopf, “decided to double the force facing the Iraqis,” Powell writes in his memoir. “It reflected my belief in using all the force necessary to achieve the kind of decisive and successful result that we achieved in the invasion of Panama and in Operation Desert Storm.”

Commentators have reduced the Powell Doctrine to one of “overwhelming force,” but Powell writes, “I have always preferred the term ‘decisive’ (to ‘overwhelming’). A force that achieves a decisive result does not necessarily have to be overwhelming…It’s the successful outcome that’s important, not how thoroughly you can bury your adversary or enemy.”

3. Diversity and racism: Powell’s impact on race-related issues has been considerable, but it has less to do with what he wrote or said and more to do with the power of his example.

The Wall Street Journal columnist Peggy Noonan tells General Powell’s story from the 1950s as a soldier in the South, where he could buy whatever he wanted at Woolworth’s in Columbus, Georgia, but couldn’t eat there. He could spend his money at any department store in town, so long as he didn’t try to use the men’s room.

He considered the military of that time “the most democratic institution in America.” So, he wrote, “nothing that happened off-post, none of the indignities, none of the injustices, was going to inhibit my performance…I did not feel inferior, and I was not going to let anybody make me believe I was…Racism was not just a black problem. It was America’s problem. And until the country solved it, I was not going to let bigotry make me a victim instead of being a full human being.”

The story he most liked to tell about overcoming adversity took place during President George W. Bush’s first state visit to Great Britain in 2003. Condi Rice, then-White House National Security Advisor, was in a Buckingham Palace sitting room with then-Secretary of State Powell and his wife Alma.

“It was very grand, the women in gowns, Colin in white tie and tails. Talk turned to the past. Condi and Mrs. Powell were daughters of the segregated South, raised in Birmingham, Ala. In 1963, when the 16th Street Baptist Church was bombed by white supremacists, Condi, blocks away in her home, heard the blast and learned that a little girl she played dolls with had been murdered, along with three others. Alma’s father had been principal of the largest black high school in Birmingham, and her uncle principal at the second-largest, where Condi’s father had been a guidance counselor. Colin, raised in the South Bronx, had served in the South in the 1950s, and knew Birmingham from courting Alma.

Now here they were in a palace. They drank a toast to their ancestors. ‘They never would have believed it,’ Condi said. No, said Colin, ‘but they are smiling right now.’”

4. The Thirteen Rules: And that brings me to Powell’s Thirteen Rules—not quite the Ten Commandments or even Martin Luther’s Ninety-Five Theses, as they were merely scribbled aphorisms collected on snippets of paper under the glass cover over his desk.

Still, they ended up in Parade magazine and as the first chapter in Powell’s book, It Worked for Me: In Life and Leadership. They are all about the power of optimism. Here is an edited version:

From serving two formative tours in Vietnam to advising four presidents through some of the most consequential moments of the last four decades, General Powell both witnessed and made history. Throughout his remarkable career, General Powell distinguished himself as a dedicated and principled leader, and he was an inspiration to many around the world.

An Atlanticist at heart, General Powell was a proponent of international alliances and an advocate of NATO. He observed firsthand the Alliance’s success in competing with the Soviet Union during the Cold War and believed that it would continue to play a crucial role in responding to the challenges of the twenty-first century—albeit while also recognizing that the Alliance would need to change and adapt first.

He clearly expressed this view during a 2009 interview I conducted with him on the twentieth anniversary of the fall of the Berlin Wall, when I asked him what concerned him most about the future.

“I am worried about the instability we see manifested in places like Iraq, Afghanistan, North Korea, and Iran,” he said. “I think the Alliance has a role to play in dealing with these kinds of issues. I am deeply concerned about poverty throughout the world. I am concerned about infectious diseases…The Atlantic Community would do well to redirect more of its energies to these issues.”

In 2005, we presented him with the Distinguished International Leadership Award. As he accepted his award that evening, General Powell said, “America needs to make sure that it never allows the transatlantic link to weaken; it is the surest guarantee of the movement toward peace and freedom.”

One of my most memorable exchanges with him came when I asked him whether he preferred to be called General Powell or Secretary Powell. “That’s an easy one,” he said. “General Powell. I earned that one.” He had unflinching and passionate respect for military service and, in particular, for those who served the United States in uniform.

Frederick Kempe is the president and CEO of the Atlantic Council. 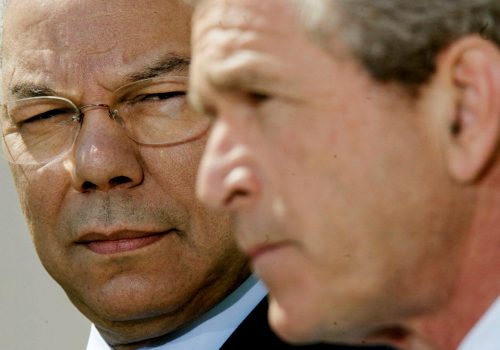 How Colin Powell was ahead of his time

The Powell Doctrine would have been more at home in the next Republican administration than his own. 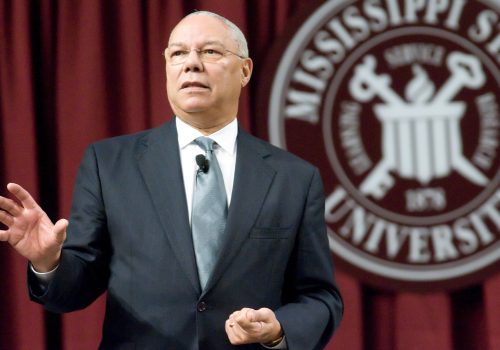 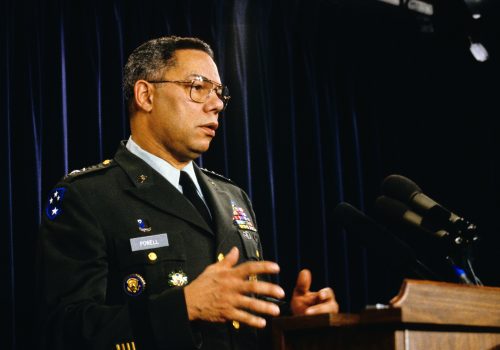 The Powell Doctrine’s wisdom must live on

Colin Powell’s criteria governing the use of force abroad aimed to ensure that war is always a last resort. US leaders shouldn't forget that as they honor his legacy.