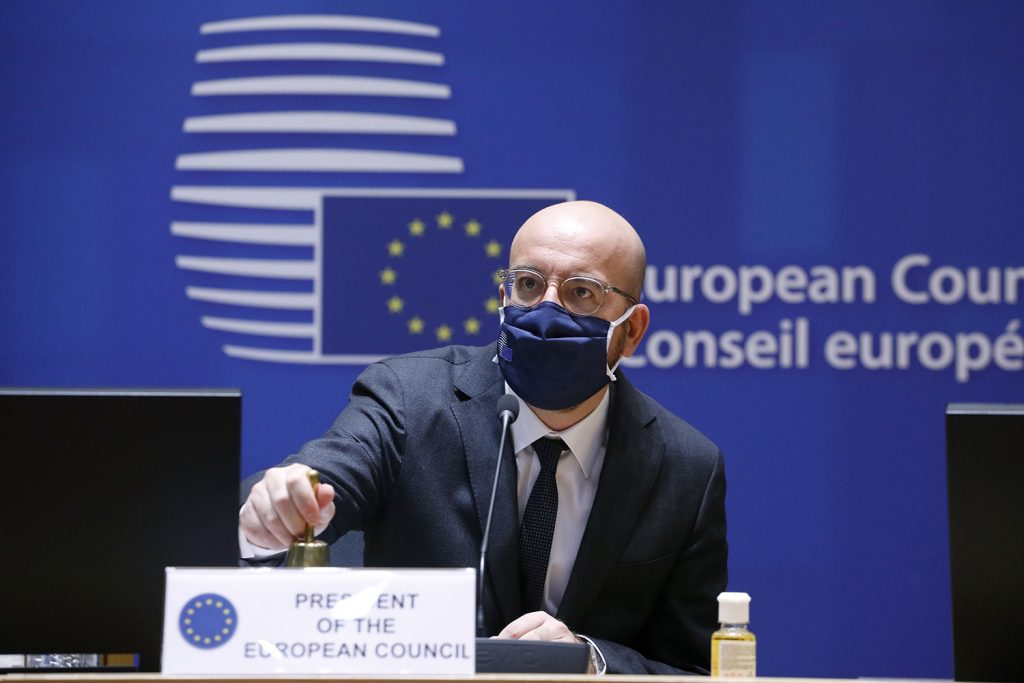 Just three weeks into US President Joe Biden’s administration, the European Union is already expressing optimism about its relationship with the United States and the potential for greater transatlantic cooperation on everything from climate change to COVID-19 and China.

European Council President Charles Michel offered his upbeat views from Brussels in conversation with Frederick Kempe, president and CEO of the Atlantic Council, as part of the launch of the Council’s Europe Center.

“With the new Biden administration, there is [in] Europe a feeling of hope and the expectation that it will be possible… to rebuild a very strong alliance—what I have called a ‘new founding pact’ between the United States and Europe,” said Michel, who assumed his post in 2019. Before that, he spent five years as the prime minister of Belgium.

“The choices made by the previous administration gave the impression that the United States was less involved in the international model,” Michel said. “For Europe, multilateralism is part of our DNA. We think that for global challenges, we need global solutions. And if it’s possible to work together in the framework of international cooperation, it would be good for the US, for Europe, and even for the world because we share the same values.”

Michel said that presiding over Belgium’s complex institutions—which govern a country with its culture split among Flemish-speaking Flanders, French-speaking Wallonia, and Brussels in the middle—prepared him well for his current job.

In the EU, “we are twenty-seven countries together—we are twenty-seven governments with domestic realities, with twenty-seven national parliaments,” he said, adding that he strives “to work day after day in order to make Europe more united. Our unity is our strength, and it’s never easy.”

What the transatlantic alliance can do on climate change and beyond

One potential area for increasing US-EU cooperation is climate change.

“The Paris agreement for us is a top priority,” Michel said. “In my first meeting one year ago as president of the European Council, we took the fundamental decision to make Europe climate-neutral by 2050. And we also tried to convince other countries that it’s important to work together in order to reach those common goals. The fact that Joe Biden, immediately after his inauguration, took the decision to rejoin the Paris agreement is very positive.”

He added: “I really hope that with this one example, we will cooperate a lot with the United States, and that this cooperation will be substantial—not only with speeches but by decisions together to implement our priorities.”

Yet Washington and Brussels have also had their share of disputes over the years over issues such as illegal subsidies and intellectual-property rights.

“I try not to be naïve. I know that even if it will be possible to reopen a good channel of communication, some topics will be difficult,” Michel said, adding that trade disputes—such as the one now before the World Trade Organization involving Boeing and Airbus—are particularly sensitive. “I hope we’ll be able to make progress and find acceptable solutions.”

Asked about the EU’s pursuit of strategic autonomy—a term first associated with defense policies—Michel said it all boils down to securing “more resilience, less dependence, and more influence.” The need for strategic autonomy has been particularly evident throughout the coronavirus pandemic, which has devastated Europe.

“At the beginning of the crisis, it was difficult for us to be able to provide basic medical equipment like masks. We were too dependent,” he said. “Indeed, in the future, we need to be less dependent. At the security level, I think it’s very important [for Europe to be] more responsible—for example, to invest more in order to develop a more common approach on defense and security. Many EU member states took the decision to invest more in our common defense under the framework of NATO.”

Michel said he understands why some people on both sides of the Atlantic are concerned about this autonomy and what it means for the future.

“But I have one absolute personal conviction,” he said. “If Europe is stronger and more robust, if Europe is more able to provide capabilities in order to guarantee our common security, it’s good for our alliance, and also [good] at the economic and trade level.”

China and Russia will dominate the EU foreign-policy agenda

Michel also outlined the EU’s approach to China and Russia—two countries that will dominate the Biden administration’s agenda.

Last year, China surpassed the United States for the first time ever to become the EU’s top trading partner. During the first nine months of 2020, the value of EU-China trade came to $516.8 billion, according to the European Statistical Office, compared to $501 billion in EU-US trade over the same period.

Even so, he said, “if we want to be credible in order to tackle global challenges, we need to engage with China on COVID-19 and climate change. Each time we had the opportunity to speak with Chinese authorities, we put on the table this question of climate change, in order to convince China to move on this important topic.”

“It’s a step in the right direction, but it’s not enough,” Michel said, adding that “we don’t paper over” differences between Brussels and Beijing on human-rights issues, especially when it comes to the treatment of Muslim Uyghurs or the ongoing repression of free speech in Hong Kong.

Turning to Russia, Michel accused the Kremlin of using “hybrid threats, disinformation, and fake news” to defend its hostile actions in Ukraine as well as in Libya and Syria. In fact, earlier this week in Brussels, Michel visited Ukrainian Prime Minister Denys Shmyhal to discuss that country’s negotiations on a free-trade area between the EU and Ukraine. He also reaffirmed support for Ukraine’s territorial integrity and continued sanctions against Russia for its 2014 invasion of Crimea and ongoing hostilities in the separatist regions of Luhansk and Donetsk.

“We don’t accept Russia’s behavior, or what they are doing with [Alexei] Navalny,” said Michel, referring to the country’s top critic of President Vladimir Putin; Navalny has been jailed since January 17. “We are not intimidated by Russia, and indeed we hope that with the US and the UK, we can coordinate to be tough and remain calm in order to defend our interests.”