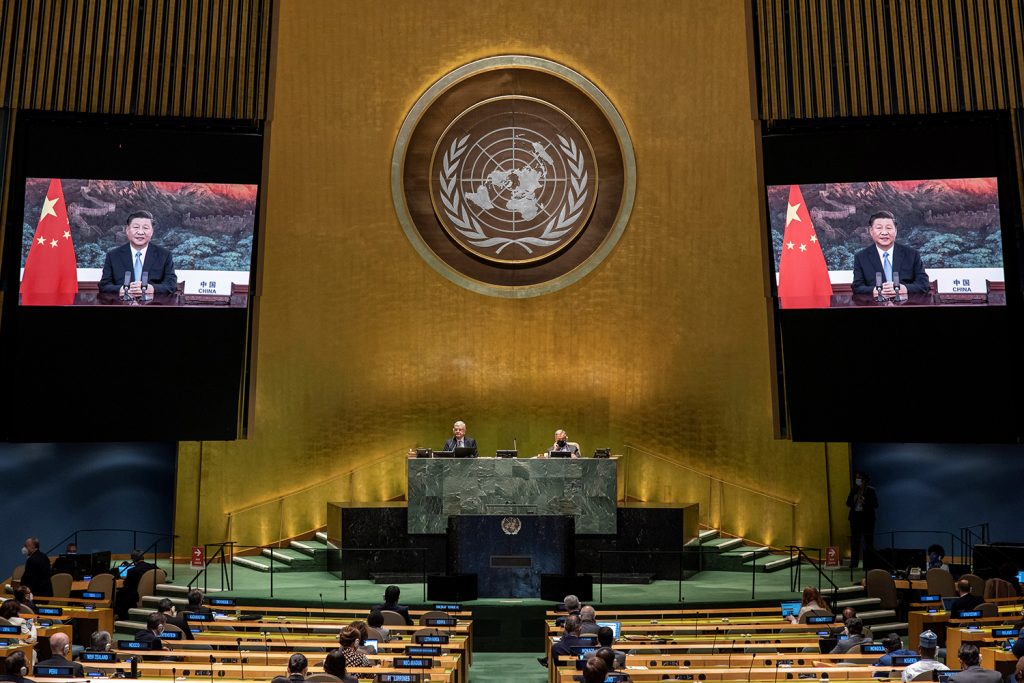 Joe Biden’s inauguration today as the 46th president of the United States may turn out to be the single most important milestone in the battle to reverse climate change—arguably rivaled only by Chinese President Xi Jinping’s pledge at the United Nations General Assembly last September that his country would reach peak carbon-dioxide emissions by 2030 and achieve carbon neutrality before 2060.

But can China actually hit those targets? And even if it does, will that be enough? Those are the urgent questions that an expert panel sought to answer when it convened virtually on January 19. The session, moderated by Margaret Jackson, the deputy director for climate and advanced energy at the Atlantic Council’s Global Energy Center, was part of the Council’s 2021 Global Energy Forum.

Carbon neutrality by 2060 is actually “not hugely ambitious for China. If you look at the current mitigation efforts underway in China, notwithstanding the recent bump-up in coal, 2060 is eminently doable,” said Kevin Rudd, the former prime minister of Australia and current head of the Asia Society. “And China’s past practice on these sorts of targets has been to under-promise and over-deliver.”

Over the past few months, he said, with the world consumed by the worsening COVID-19 pandemic and the imminent departure of the climate change-denying Donald TrumWp, and perhaps in anticipation of the new Biden administration, China has sought to “steal the march on the United States—and in the eyes of international geopolitical opinion, to occupy the vacuum which the Trump administration left on climate leadership.”

Chinese carbon-dioxide emissions could peak around 2025

Zhang Xiliang, the director of the Institute of Energy, Environment, and Economy at China’s Tsinghua University, expects his country’s carbon emissions to peak around 2025, followed by a plateau and then a sharp decline.

By 2035, he predicted, China will see a 20 percent decline in CO2 emissions relative to that peak. By 2050, it could witness more than a 70 percent decline, leading to carbon neutrality by 2060.

Furthermore, Chinese coal use will taper off after 2025, with usage of natural gas also peaking at that time and oil consumption peaking around 2030, according to Zhang. He predicted that the contribution of renewables and nuclear to China’s energy mix will reach 25 percent by 2030 and exceed 80 percent by 2060.

Not long ago, the Chinese government viewed the concept of carbon neutrality as an economic burden, said Pan Jiahua, the director of the Institute of Eco-civilization Studies at Beijing University of Technology. Today, though, “we have a consensus that it’s an opportunity for employment, growth, and the transformation of society.”

Furthermore, he said, “our environment has been heavily damaged by coal burning. If we go to carbon neutrality, pollutants will be removed, and consumption of oil will be reduced as well. We also have a very ambitious target for reforestation.”

Within a decade, China will have around 800 gigawatts of installed solar- and wind-generated capacity, which will help lower the country’s reliance on coal (currently at 57 percent of China’s energy mix, compared with the world average of 25 percent).

Even so, simply boosting renewable sources of energy won’t get the job done, Pan warned.

“Consumer goods and durable goods must be carbon-free as well. By 2035, the majority of our automotive market will be purely electric,” he said, noting that within four years, some six million electric vehicles will crowd Chinese roads and highways. “We need to accelerate the pace. Otherwise, it will be too late.”

But is China really doing enough?

Todd Stern, a nonresident senior fellow at the Brookings Institution and former US special envoy for climate change, said Xi’s drive toward a carbon-neutral China by 2060 is “enormously important”—especially considering that China, with 1.4 billion inhabitants, accounts for 27 percent of total world emissions of greenhouse gases.

But keeping carbon emissions at their current levels this decade isn’t good enough, he added. Even though the Chinese government will no longer approve new coal-burning power plants, more than 100 gigawatts of coal-fired capacity is already in the pipeline.

Goals such as those staked out by China are a means to the end of limiting the rise in global temperature to 1.5 degrees Celsius above pre-industrial levels. And “if that’s your understanding, then flatlining emissions for China in the 2020s is completely inconsistent,” he said, since that “would basically bust the world’s carbon budget.”

“The world needs China to do a lot more, and China is not doing more,” Stern argued. In the meantime, he said, “we have a new president [who is] going to push as far as he can. He’s committed to 1.5 degrees [of temperature rise above pre-industrial levels] and 100 percent clean electricity by 2035.”

The next step for China and the United States: Stop financing fossil-fuel projects

One critical issue is getting sufficient financing for clean technology at the expense of continued research and development (R&D) on fossil fuels like petroleum and natural gas.

Amy Myers Jaffe, a research professor and the managing director of the Climate Policy Lab at Tufts University, said both the United States and China should reduce R&D spending on fossil fuels except in the case of carbon sequestration.

“The Biden administration will get momentum from states and municipalities,” she said, noting the “tremendous acceleration” of investment in offshore wind farms along the US Atlantic Coast. Last September, in the wake of record heat waves and devastating wildfires, California Governor Gavin Newsom signed an executive order banning all sales of gasoline-burning vehicles by 2035.

“Companies cannot get financing to continue operating in coal. Utilities are voluntarily shutting coal prematurely because they can provide a cheaper mix and [get] easier financing for renewables,” Jaffe said. “Even with the difficult politics of the United States, you’re going to see the Biden administration pushing international organizations to limit financing of fossil fuels, especially coal.”

Rudd agreed, calling on China not to extend soft financing—either at home or abroad—to any project that depends on hydrocarbons.

Looking forward to this year’s COP26 United Nations climate-change conference in Glasgow, Rudd said it’s crucial for both Washington and Beijing to set ambitious carbon-emission targets for the decade ahead. Otherwise, the rest of the world could lose momentum in the global campaign against climate change, he warned.

“China can no longer pretend that it is a developing country,” Rudd said, adding that such rhetoric is particularly hard to believe “when you start planning to put a man on the moon.”

In the end, he said, Chinese officials will be motivated by self-interest, if nothing else. “My country has performed very badly; this is known to the international community. Multiply Australia by about twelve, and that’s China,” Rudd said. “Unless they bring their own greenhouse-gas emissions under control and keep the global temperature rise to within 1.5 degrees Celsius this century, the environmental consequences for China will be catastrophic.”

The inaugural edition of the Global Energy Agenda provides context for the unprecedented year that has passed. It features a survey of thought leaders in the energy sector, as well as a series of essays by the leading figures in energy, to set the energy agenda for 2021.