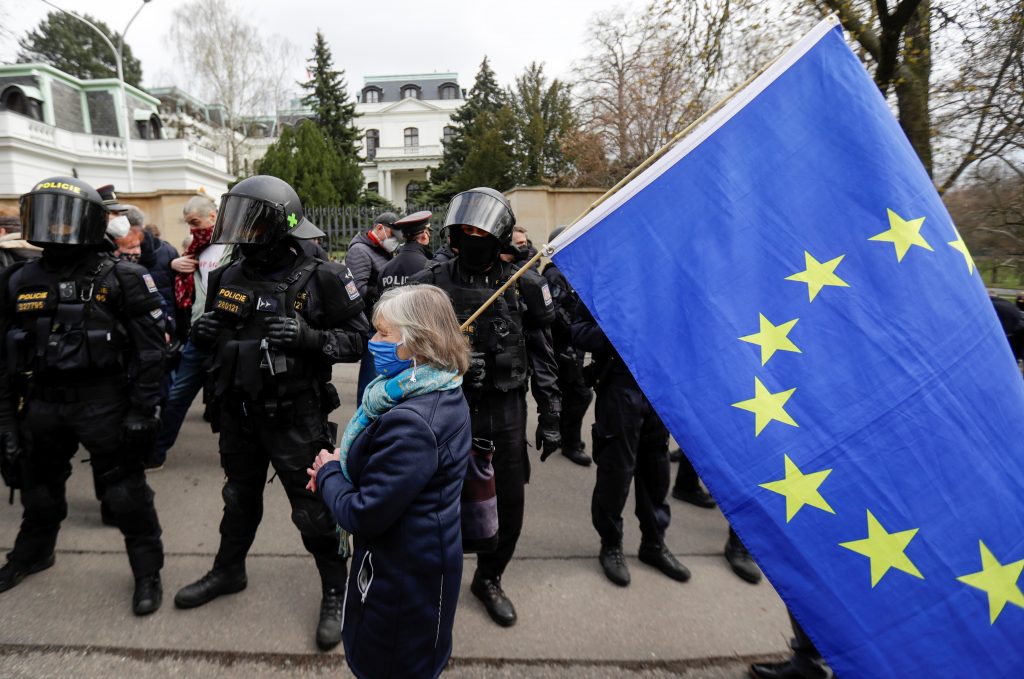 Over the past few months, the Czech people have experienced two major events that are transforming their worldview.

For much of fall 2020 through spring 2021, the country topped the charts of per-capita COVID-19 infections and deaths. Most Czechs were truly shocked to see their nation doing so poorly, having typically been safe from outside threats given the country’s bordering mountains and friendly neighbors. In addition, as a former Soviet satellite, the country was “quarantined” from the world by the Iron Curtain.

As infection rates began to decrease and the country started to get back on track, Czechs’ conviction that they were somehow insulated from the world’s threats was shaken again. On April 17, the government announced that Russia’s military-intelligence service (GRU) caused two ammunition-warehouse explosions in the village of Vrbětice in October and December 2014, which killed two Czech citizens and caused some fifty million dollars in damage.

Czechs are now beginning to understand that neither mountains nor friendly neighbors can protect them from outside evils, and that external threats should be taken seriously.

The revelations about Russia

The dragging investigation of the 2014 explosions gained traction when new information came to light about the March 2018 poisoning of Sergei and Yulia Skripal in Salisbury, England. Czech police discovered that the two main suspects in the Salisbury incident—Alexander Mishkin and Anatoly Chepiga—were operating in the Czech Republic and booked a visit to the Vrbětice ammunition depot under false identities just days before the first explosion.

The investigative website Bellingcat concludes that at least six operatives from the infamous GRU unit 29155 were directly involved and—in a rather exceptional move—supervised on the ground by their commander, Gen. Andrey Averyanov.

A source who worked with Czech arms dealers for years, and requested anonymity to discuss sensitive matters, pointed out that the material that exploded in Vrbětice was of such nature and stocked in such a way that it couldn’t have blown up without human tampering. The source also asserted that the massive scale of the explosion couldn’t have been reached with just a few sources of ignition, hinting at a larger operation in which Russian intelligence may have even had accomplices on the Czech side.

Weapons in the depot were stocked by the Czech company Imex Group for Bulgarian arms trader Emilian Gebrev, who had already survived two poisoning attempts that Bulgarian investigators tied to GRU unit 29155. If Gebrev were planning to send military supplies to Ukraine in its war against Russia, as he’s acknowledged he’s done in the past, Moscow would have had a motive to thwart the shipments.

How the Czech government reacted

In response to the revelation of Russian involvement in the explosions, Prague expelled eighteen employees of the Russian embassy whom Czech officials identified as working either for the GRU or the foreign intelligence service, known as SVR. The embassy was a Cold War relic, with about 120 Russians enjoying diplomatic immunity—more than double that of the United States. Even after the cuts, the Russian embassy remained by far the largest in Prague, which is neither politically nor economically justified considering that Russia is only the twelfth-largest Czech trading partner.

Moscow’s retort was disproportionate and escalatory: It essentially paralyzed the Czech diplomatic mission by ordering the departure of twenty embassy employees, including the deputy head of mission, leaving the embassy with only seven diplomats and twenty-five administrative staff. So Prague responded in kind. It decided to cap the Russian diplomatic presence to strict parity with the number of Czech officials in Moscow.

With more than eighty Russian employees with diplomatic immunity due to leave Prague in the context of the Vrbětice explosions, the Czech Republic is rivaling former US President Ronald Reagan’s decision to expel eighty Soviet officials from the United States in 1986.

While the cutting of the diplomatic flesh seems to have paused, reactions from Moscow indicate that the Kremlin is looking for options to punish Prague.

Russian media has speculated about the possibility of economic sanctions. Yet Russia served as a destination for only 2.2 percent of Czech exports in 2020. So while a few Czech companies might be hit by Russian sanctions, this wouldn’t generate a major blow to the country. In particular, Czech efforts to diversify energy providers have left Russia with little leverage.

Russia can retaliate in cyberspace, where the GRU is known to be an active player. The Czech National Cyber and Information Security Agency has already warned of coming attacks, and Prague is familiar with the constant disinformation campaign waged by Moscow in an attempt to undermine the Czech government’s narrative about the explosions.

Furthermore, Russian President Vladimir Putin signed a decree on April 23 to counter other countries’ “hostile moves” and instructed officials to draw up a list of “unfriendly countries,” including the United States, the United Kingdom, and Australia, plus several former Soviet satellites: Ukraine, Georgia, Moldova, the Baltic countries, Poland, and the newly “unfriendly” Czech Republic and Bulgaria. According to Russian state media, these countries will have limited options to employ Russian nationals at their diplomatic missions. This will certainly create a problem, though not an insurmountable one, for countries like the United States or the Czech Republic that rely on local employees for administrative support.

How much Russia has lost

The fallout from the Vrbětice affair marks an important setback for Moscow’s efforts to regain influence in Central Europe. Russian spy networks that used Prague as a regional hub will be at least temporarily disrupted. The Russian state-owned company Rosatom has been banned from the multi-billion dollar planned tender for the construction of two additional reactors in the Dukovany nuclear-power plant. Prague is also no longer considering purchasing Russia’s Sputnik V vaccine, which has elicited doubt from medical regulators, sowed political discord throughout Europe, and even helped force out Slovakia’s prime minister.

Yet the Kremlin may nevertheless view the Vrbětice operations as a win. Experts are pointing out that if Russia’s aim was to prevent the shipment of weaponry stocked in Vrbětice to the battlefields of Ukraine, then it succeeded.

With the blast, Moscow also effectively issued a warning to all those who may have been considering business with Russian enemies, such as Emilian Gebrev, rather like the message it sought to send to so-called traitors through the poisoning of the Skripals. Where the Kremlin is unable to attain respect, it at least wants to generate fear. Whether it’s the result of a well-thought-out Russian strategy, operational failures on the part of Moscow, or improved investigative efforts, GRU activity from the Vrbětice blast to meddling in the 2016 US presidential election is increasingly being exposed to the public.

How the world has reacted

Prague’s allies have shown support and solidarity in response to the new information about Russia’s deadly operations on Czech soil. Both the European Union (EU) and NATO issued strong statements. The prime ministers of the Visegrád Group (the Czech Republic, Poland, Hungary, and Slovakia) jointly condemned Russian aggression and the breach of international law. Five countries in Central and Eastern Europe have now decided to expel Russian diplomats in solidarity with the Czech Republic.

Some observers are pointing out that the international reaction was weak compared with what followed the 2018 Skripal poisoning, when almost thirty countries expelled over 150 Russian diplomats. GRU operations in the Czech Republic appear to be at least as serious of a threat to public security as the Skripal poisoning, considering the scale of the blast. Yet there are several reasons why the international reaction likely didn’t reach the 2018 level:

Despite these limiting factors, Czech diplomacy secured strong and timely international support that cannot simply be measured by the number of expulsions of Russian diplomats. This is an important development, despite the commentary that often appears in mainstream Czech and international media. Prague didn’t have to wait or beg for allies’ support, as some other countries have had to do in their clashes with Russia.

The message to the world is clear: The Czech Republic stood up boldly to Russia upon discovering unprecedented aggression carried out on its territory. This provides an opportunity for Prague to not only decontaminate and reassess its relations with Moscow, but also issue a wake-up call to countries that still tend to overlook Russia’s malign behavior in their own backyards. Allies’ reactions aren’t only a matter of solidarity with Prague. Their own security is at stake. If Russian aggression is left without an adequate response, the Kremlin will notice. That’s why it’s heartening that the upcoming EU leaders’ summit in Brussels on May 25 will discuss other potential forms of solidarity with the Czech Republic, including additional expulsions.

Petr Tůma is a visiting fellow at the Atlantic Council’s Europe Center and a Czech career diplomat.

While Western Europe is looking forward to the next four years, the reaction is more mixed as one moves east. The reason is simple: The Trump administration—despite (and perhaps because of) its confrontational rhetoric towards Europe and the EU in general—intensified cooperation with Central and Eastern Europe.

One year since the Skripals were poisoned, Russia has not given up its confrontational policy toward the West

One year later, “Russia shows no sign of rethinking its confrontational policy toward the West,” said Alexander Vershbow.

Image: A woman holds an EU flag next to police officers during a protest over the Russian intelligence services' alleged involvement in an ammunition depot explosion in 2014, outside the Russian Embassy in Prague, Czech Republic, on April 18, 2021. Photo by David W Cerny/Reuters.