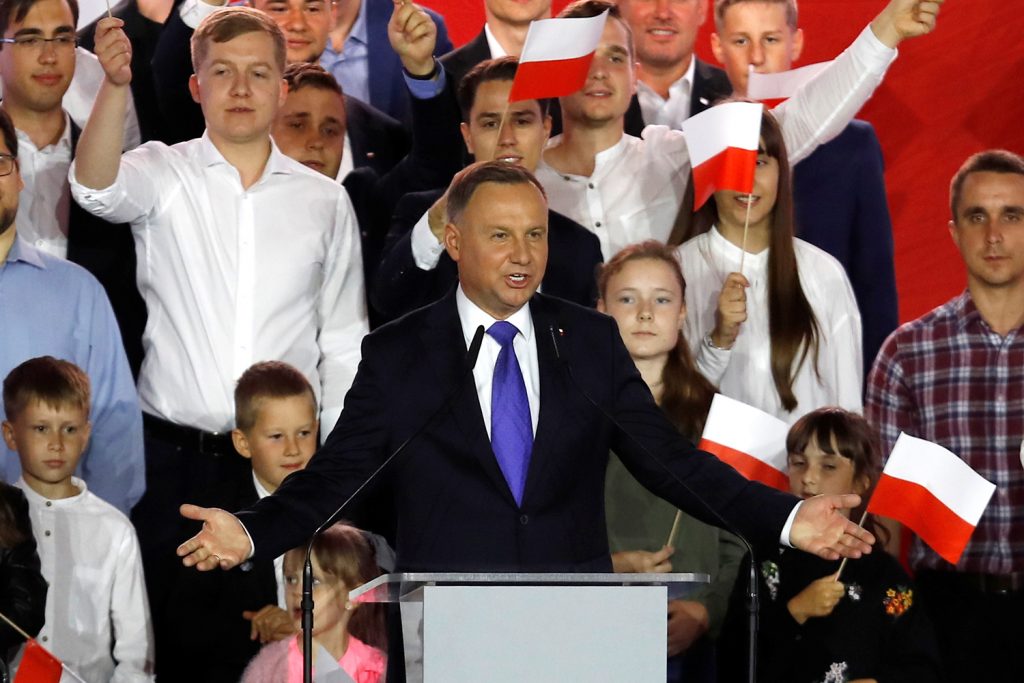 Polish President Andrzej Duda appears to have won reelection in the July 12 second round contest, edging out liberal challenger (and Warsaw Mayor) Rafel Trzaskowski in a 51 to 49 percent vote split. The race was unexpectedly competitive: six months ago, Duda was expected to win in a walk. But Poland’s liberal party (“Civic Platform”) coalesced around Trzaskowski, who turned out to be a strong candidate, and voters for most of the other former candidates went for Trzaskowski after the June 28 first round.

The result is a hard blow to Poland’s liberals. But their surprising strength in this race—coming after they narrowly gained control of Poland’s Senate in last fall’s parliamentary elections (though losing the more powerful lower house of Parliament)—shows that Poland’s politics are likely to remain competitive. Duda won in small towns and the countryside, especially in Eastern Poland, and among older and poorer voters; Trzaskowski won in cities, and among younger, more affluent, and more educated Poles. These demographics suggests that Poland’s political future could slowly move in liberal or centrist directions.

But that longer-term trend could trigger a sharp escalation of political tensions in the short term. The presidential campaign was marked by nasty cultural disputes, including Duda’s anti-LGBTQ statements that generated criticism in Poland and abroad (so much so that Duda backed off some of them). Poland’s state-owned television network was strident in its support of Duda, even accusing Trzaskowski of being prepared to bow to “Jewish demands” about compensation for losses from the Holocaust.

Duda as president, however, has not been particularly divisive (especially compared to some others in the right-wing Law and Justice Party government). On election night, he invited Trzaskowski to meet at the Presidential Palace in what might have been a gesture of national unity. Duda has played a constructive role in his many meetings with US President Donald J. Trump, by several accounts seeking to soften Trump’s anti-EU edge, expressing support for NATO, and avoiding being used by Trump in the latter’s disputes with Germany. Duda could in his second term continue Poland’s pro-Western foreign policy, working with the EU and the United States, and associate himself with the more constructive Law and Justice policies (generally sound economic policy and popular social welfare programs that deliver for their electorate). That would mean trying to move Poland’s government in a centrist direction, reaching out to at least some of Trzaskowski’s supporters, who probably represent a growing and certainly politically active part of Polish society.

A more worrying scenario is that the Law and Justice Party hard right-wing, worried about a slow but steady liberal political advance, responds to this close election with political aggression. It could seek to intensify government control over the media (e.g., by attacking the independent and partly US-owned TVN network), continue its squeeze on Poland’s independent judiciary, and double down on the most strident cultural wars elements of the just-concluded presidential campaign.

Turning Poland in a hard-right political direction would weaken the country’s standing in Europe and the United States alike. While there are some hard-right elements in Poland who seek to ally themselves with the most strident nationalists around Trump, the United States is never going to be an alternative to the EU for Poland; Poland’s trade ties are with Europe, especially Germany, and the EU remains a source of development funds that Poland still needs. And there is no green light from the current US administration for an assault on free media in Poland: the capable US ambassador in Warsaw, Georgette Mosbacher, has on several occasions taken strong stands in favor of media freedom generally and supported TVN from political attack. Besides, it would be a major mistake for any Polish government to bet all on one US political option, as Joe Biden could be the US president by next January.

Duda won his election. He’s the president of a closely divided country. Trzaskowski almost beat him with a message that was inclusive and appealed to many Poles who, demographically and socially, probably represent Poland’s future. It’s now Duda’s move, hopefully to demonstrate that he is a unifying force in Poland.

Poland has begun to ease its COVID lockdown, but Poles remain unsure if the benefits of reopening outwweigh the potential costs.

Image: Polish President and presidential candidate of the Law and Justice (PiS) party Andrzej Duda speaks after the announcement of the first exit poll results on the second round of the presidential election in Pultusk, Poland, July 12, 2020. REUTERS/Kacper Pempel