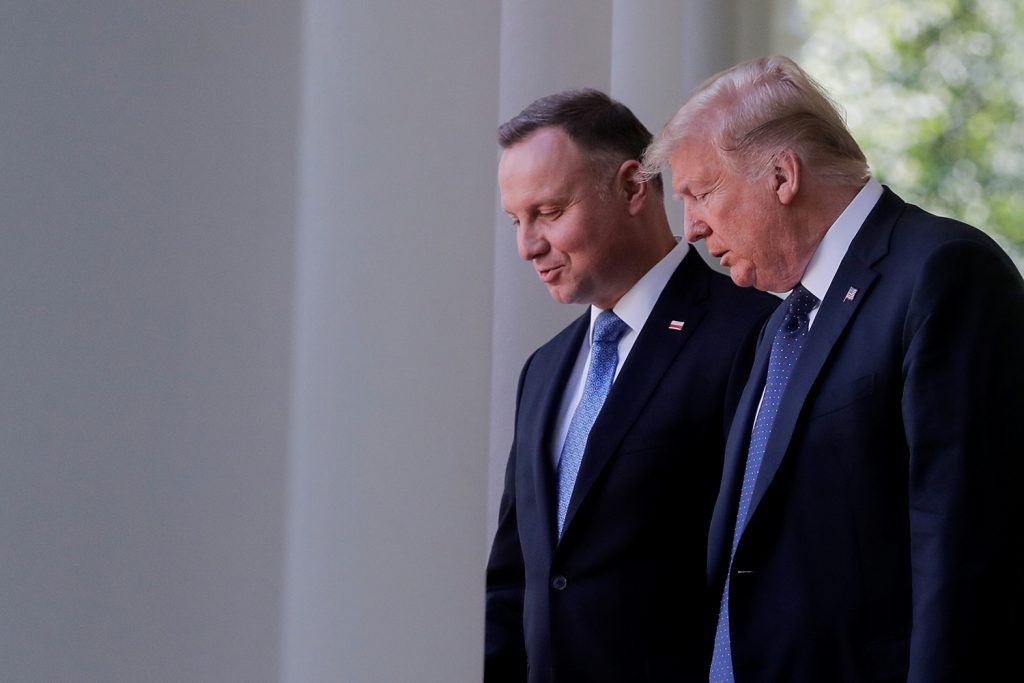 But that’s exactly where Warsaw has found itself after Donald Trump’s surprise announcement last month that he would remove 9,500 American troops from Germany, largely in retaliation for the German government’s low defense spending, and redeploy some of those forces to Poland. Poland “asked us if we would send some additional troops,” said the US president, flanked by Polish President Andrzej Duda. “They’ll be paying for the sending of additional troops. And we’ll probably be moving them from Germany to Poland.”

Poland, which Trump emphasized is among the few NATO members already spending at least 2 percent of its gross domestic product on defense, had in fact already gotten assurances that it will receive the boost in the American military presence in the country that Warsaw has long requested in exchange for helping cover the cost.

The way it’s happening isn’t exactly what the Polish government had in mind, however. And Polish officials may not have received advance notice of Trump’s intention to announce the potential redeployment of forces to Poland from their mutual NATO ally, Germany, during his visit with Duda. “To the best of my knowledge, and I’ve been quite involved in those conversations, there was no concrete conversation between Poland and the US on the troop transfer from Germany to Poland,” according to Poland’s ambassador to NATO, Tomasz Szatkowski.

“From a Polish perspective, the most preferred option is an overall net increase of the US presence” in Europe, Szatkowski explained to me on June 29 in an exclusive interview for the “Channeling Brussels” podcast. “And this is one of the reasons that Poland didn’t initiate talks [with the Trump administration] on the US troop transfer from Germany to Poland. Another reason being good neighborly relations with Germany, and … [w]e also understand the value and strategic importance of the US presence in Germany.”

Despite President Trump’s remarks, which seemed to conflate a 2019 bilateral agreement to increase US troops in Poland with his new plan, Szatkowski said his government’s understanding is that the previous arrangement did not entail drawing on US military “formations that currently are based in Germany.”

He said the conversation between Duda and Trump last week did not get into any detail about troops transfers, based on the readouts he’s received of their White House meeting. And no one is scrambling yet in Warsaw to figure out where to house any additional American troops, equipment, or capabilities coming from Germany—or where to find the money to do that. “It’s too early to start preparations,” he added, since no formal plan involving an influx of US troops from Germany has been presented to the Polish government.

Listen to the full podcast:

At the same time, the ambassador echoed remarks Duda made during his visit with Trump about the Polish government’s willingness to accommodate more US troops if the plans currently being fleshed out by the Pentagon call for that. “We won’t turn away from such a conversation,” Szatkowski said, explaining that a shift of American forces from Germany to Poland rather than back to the United States “will serve [NATO’s] overall objective, meaning retaining as many US troops in Europe as possible and also increasing the deterrence on the eastern flank.”

But increasing the NATO troop presence on that eastern flank is a surefire way to provoke complaints from Moscow that the alliance is violating the 1997 NATO-Russia Founding Act, which envisions no “additional permanent stationing of substantial combat forces” in mutually agreed areas of Central and Eastern Europe.

It’s a concern that also appears to be top of mind for the German government. During an appearance with the Atlantic Council on June 24, German Defense Minister Annegret Kramp-Karrenbauer suggested that moving troops from Germany to Poland could have bearing on the 1997 agreement, urging allies to “stand visibly united and … stick to this treaty that we’ve agreed to.”

Szatkowski said he was “surprised” by Kramp-Karrenbauer’s remarks. “I can understand German concern with the possibility of the transfer of troops,” he said, “but we don’t think that the NATO-Russia Founding Act is the main source or basis of concern when it comes to that.” Even if troops move from Germany to Poland, he reasons, “there is no threat that this is going to be escalatory in any manner, so we don’t share those concerns.”

On June 30, the day after the ambassador and I spoke, Trump signed off on the Pentagon’s plans to withdraw and redeploy American troops in Germany in a manner that remains unclear. But the story, with Poland in the middle of it, isn’t nearly over yet. US lawmakers from both parties have vowed to press ahead with attempts to reverse the decision.

Image: US President Donald Trump arrives for a joint news conference with Poland's President Andrzej Duda in the Rose Garden at the White House in Washington, US, June 24, 2020. REUTERS/Carlos Barria