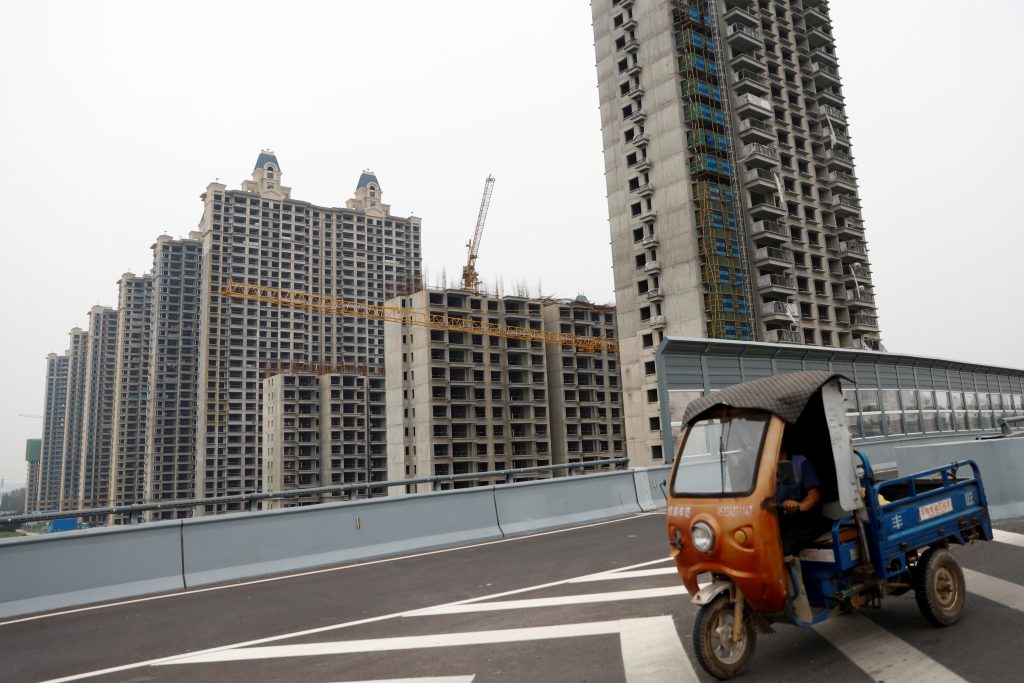 A house of cards is never a source of confidence to financial markets. But a house of cards built on shifting political sands is a signal for investors to head for the exits.

That’s exactly what’s been happening as markets take the measure of the teetering fortunes of real-estate conglomerate China Evergrande Group, one of China’s largest property developers with some 1,300 projects in 280 cities. Share prices have tumbled around the world in response to growing uncertainty about how Beijing will respond to the group’s imminent default on bonds issued in US dollars. Asia’s corporate bond markets have been shaken, and commodity prices have fallen amid worries that property development will slow in a Chinese economy where that sector represents about one-quarter of GDP.

The source of concern extends far beyond a property company with about three hundred billion dollars in liabilities and huge bills coming due. The uncertainty is decidedly political: China’s paramount leader, President Xi Jinping, has shaken investor confidence by painting bull’s-eyes on industries ranging from e-commerce to ride-sharing to mortgage lending, and targeting the business executives who have benefited from their success.

As Xi has launched a nationwide political campaign built around the Maoist nostrum of “common prosperity” in response to China’s deep income inequalities, investors have become nervous about a broad reversal of fortune. The Evergrande crisis only underlines their concerns about the prospects for China’s property sector—which, ironically, has been the basis for the rise to prosperity that hundreds of millions of Chinese have experienced in recent decades—and negative spillovers to the wider economy. One key reason that the company is facing collapse is restrictions on home sales and mortgage lending imposed by Beijing to cool a market driven sky-high by years of speculation.

Some commentators have been quick to raise the prospect of a systemic crisis in China resulting from Evergrande’s woes, which stem from over-investment in property, especially in smaller Chinese cities, and poorly thought-out expansion into industries ranging from electric vehicles to mineral water to professional soccer. But Beijing has deep pockets and has been willing to bail out or restructure systemically important financial institutions—witness past rescues of state banks and other distressed companies. In this case, the government may eventually be prepared to support the broader property market as it moves to restructure Evergrande. As the Rhodium Group’s Logan Wright told the Financial Times, “Beijing is more likely to wait for signs of financial stress to materialize, rather than acting preemptively.”

Nonetheless, there clearly is a deep disquiet in Chinese markets in the face of Xi’s rapid turn toward strict regulation of the country’s most successful private-sector companies, which have helped transform China’s economy. Many observers worry that the policy movement reflects a profound shift away from the past four decades of support for the private sector, which is China’s primary source of employment. The Wall Street Journal’s Lingling Wei wrote this week that Xi “appears to want a state in which the party does more to steer flows of money, sets tighter parameters for entrepreneurs and investors and their ability to make profits, and exercises even more control over the economy than now.”

Xi’s tectonic shifts, which are now shaking Evergrande, have been creating market tremors for the past year. They began when Xi ordered the cancellation of Ant Group’s $34 billion initial public offering (IPO) last November, and that set in motion a rapidly accelerating stream of actions against corporate practices and unseemly profits. Among other steps, Alibaba Group Holding (Ant’s parent) and other e-commerce companies have been hit with heavy fines for anti-competitive practices, the multibillion-dollar private tutoring industry has been banned from turning profits, and online payment companies are facing the prospect of tight government control of their activities as the People’s Bank of China moves to issue a digital currency. The tech giants have been strong-armed into donating billions of dollars to government-run social programs.

The market impact of these policies has been costly. Chinese stocks have shed at least $1 trillion in market capitalization—across markets in China, Hong Kong, and the United States—since the crackdown began. Alibaba’s share price is down 34 percent this year, and e-commerce and social media giant Tencent Holdings has fallen from the list of the world’s top ten companies in market capitalization. Overall, China’s stock markets have been among the worst-performing in Asia this year.

The damage is more severe on Wall Street, where listed Chinese companies—many of them from the technology and e-commerce sectors—have been pummeled by developments in Beijing and US-China tensions. Chinese regulators have signaled that they are tightening the screws on companies seeking to list abroad, and the US Securities and Exchange Commission increased scrutiny of all new Chinese IPOs, a step that has halted the flow of Chinese listings on Wall Street. In addition, a 2020 US law mandating that the listed Chinese companies open their books to American regulators could force the delisting of those stocks beginning in 2024. The Nasdaq Gold Dragon China Index of Chinese stocks is down nearly 50 percent from its February high.

Nonetheless, even as many foreign investors pull back from China investments, some foreigners continue to bet on China, taking advantage of channels that Beijing has opened for stock and bond investments. Many of the investors are attracted to higher yields for Chinese government securities, with the ten-year bond offering twice the yield of comparable US Treasuries. Some foreign investors have even been buying up Evergrande’s depressed US dollar bonds in expectation of a rebound when the government eventually acts.

Senior Chinese officials assiduously court influential Wall Street executives, for example hosting the first meeting since 2018 of the China-US Financial Roundtable this month to reassure their American counterparts that Beijing remains market-friendly. China’s economic czar, Vice Premier Liu He, has also sought to reassure businesses and markets that China is committed to its policies of economic reform.

But the real economy is showing its own signs of stress, in part because of COVID-19-related shutdowns. Growth is slowing: August retail sales rose at their lowest rate in the past year, and industrial production is decelerating after rising sharply due to strong pandemic-driven export demand. Moreover, in a sign of the problems Evergrande faces, home sales fell 20 percent by value in August, and new home prices are flat.

The bottom line is that Xi’s increasingly doctrinaire policies are being imposed on an economy that has grown accustomed to responding to market forces. China’s emergence as the world’s second-largest economy has been achieved by entrepreneurship and private-sector innovation—not state diktats. The issue going forward will be how much the government really will expect political campaigns to replace rational economic behavior. Any miscalculation could be extremely costly.

China’s drive to develop technologies fueled by data has given its corporate crackdown a more profound purpose: to expand the data sources available to the government.

This issue brief examines the key role of Xi Jinping and the CCP in the development of a new strategy for state capitalism in modern China.