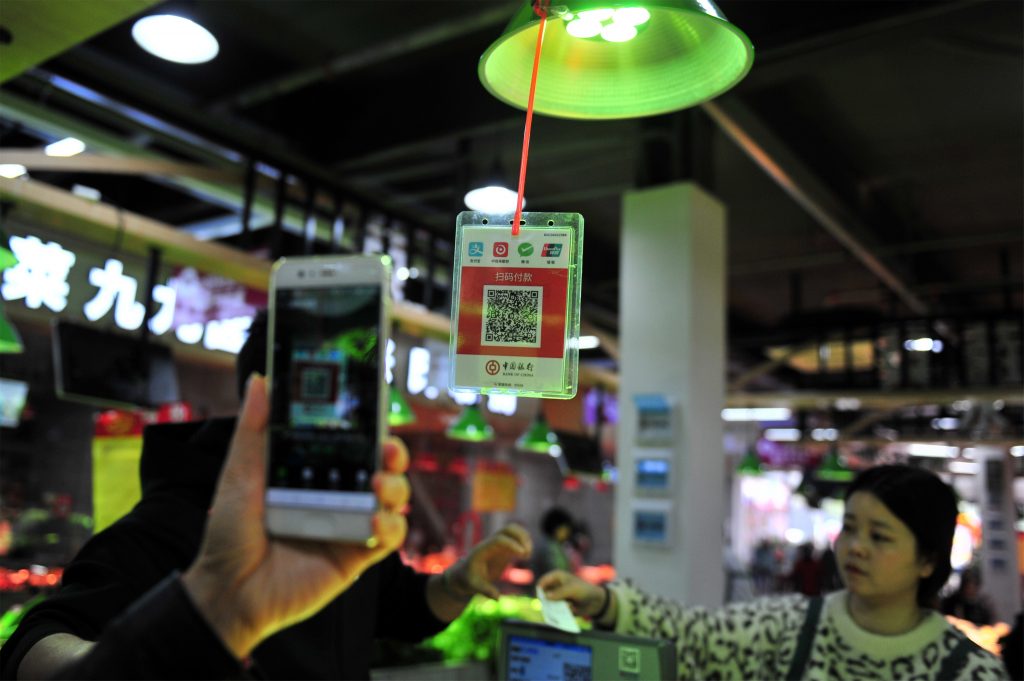 As China accelerates its efforts to widely distribute its digital currency before the 2022 Beijing Winter Olympics, Chinese officials are reassuring the public that the initiative is simply about strengthening the monetary system. The furthest thing from their minds, the government insists, is undercutting the role of China’s “tech giants” in the mobile economy.

In fact, once the digital yuan is in wide circulation, it will likely strike the digital-payments operations of China’s largest e-commerce and fintech conglomerates—Alibaba Group Holding and Tencent Holdings. That will advance two of Chinese President Xi Jinping’s key goals: to rein in the power of China’s private sector and to create a mechanism through which the government can access reams of digital data that may prove helpful to Beijing in the global race to develop artificial intelligence (AI).

The world of finance has been transfixed over the past eight months by Beijing’s widening effort to slap down the companies that dominate the country’s online buying, borrowing, and investing. The crackdown has roiled stock markets, pummeled the e-commerce empires with fines, and jumpstarted a transformation of China’s regulatory landscape. But the drive to develop technologies fueled by data has given the corporate crackdown a more profound purpose: to expand the data sources available to the government, because China intends to use AI for everything from military modernization to monetary policy management.

China’s central bank digital currency (CBDC) is one part of that effort to create a data source. The People’s Bank of China (PBOC) has been on the cutting edge of government efforts around the world to advance a digital currency, dating back to 2014. And as new research from the Atlantic Council GeoEconomics Center shows, China is the largest economy to pilot a CBDC to date.

Hundreds of millions of Chinese citizens already partake in the mobile-payments systems operated by Alibaba’s Alipay and Tencent’s WeChat Pay. Chinese mobile payments in 2020 totaled nearly $67 trillion. So the move to a CBDC was a logical step for a government concerned about maintaining control over a financial system that is rapidly transitioning and periodically facing bouts of instability.

Asserting control became an imperative for Beijing as Alibaba and Tencent moved from mobile payments to online banking, investment, insurance, and other financial services. Their emergence as powerhouses in those fields made them target as the government shifted toward regulation of the freewheeling online financial industry in recent years, partially inspired by China’s huge state-owned banks, which struggled to compete with the mobile upstarts. In short order, authorities took action, canceling last October’s planned initial public offering of Alibaba’s financial affiliate, Ant Group (which owns Alipay and includes other fintech businesses); levying heavy fines against various tech companies for uncompetitive behavior (including a $2.8 billion hit to Alibaba); and forcing both Ant Group and WeChat to adhere to laws and regulations governing traditional banks. Other large online companies have faced similar punitive actions, most notably when ride-hailer Didi Global Inc. was punished earlier this month after it proceeded with a US share offering despite go-slow warnings from Chinese regulators.

Now mobile payments are in the government’s crosshairs. Alipay and WeChat Pay control about 95 percent of China’s mobile-payment market, where customers link their online transactions to bank accounts. China’s digital currency is built on electronic wallets containing digital coins that are not linked to bank accounts. For the time being, there will be a two-tier structure in which the PBOC will issue digital yuan to banks and platforms (including Alipay and WeChat Pay) that will distribute the currency to customers. But since the PBOC can offer lower transaction fees than its private sector competitors, the state may, over time, be able to put Alipay and WeChat Pay out of business.

The official line on the relationship between the digital yuan and the mobile payment platforms is that the digital currency will be a “backup” for Alipay and WeChat Pay, especially if the mobile platforms “experience technology or financial malfunctions that may have a negative impact on the stability of China’s financial system,” as Mu Changchun, director-general of the central bank’s Digital Currency Institute, told a gathering of international bankers.

In the current climate, the mobile giants have accepted the digital yuan without protest. But in an article last October that was widely reposted on China’s internet, one official with a mobile payments company was quoted in Chinese as saying anonymously that the digital yuan is “bad news for all third-party payments companies.” The executive says that use of the digital yuan will “perhaps limit their business space” to create new services and turn them into “service providers.” It was a rare moment of candor in Chinese business media that these days carefully toes the party line on all issues.

How precisely could the PBOC leverage a digital yuan to give the government access to data? Unlike Bitcoin and other cyber currencies, all digital-yuan users will register with the PBOC under a system described by government officials as “controllable anonymity,” which will give the government the ability to track illicit transactions and presumably the activities of citizens who attract the attention of security services. At the same time, authorities are changing laws and regulations to gain more access to the vastly larger databases of digital information that Alibaba, WeChat, and many other platform companies have amassed. For example, Alibaba had nearly 800 million annual active users in 2020, as did another e-commerce company, Pinduoduo. Meanwhile, WeChat’s social media service has over one billion users.

This is information that will feed the expansion of AI research, which is enshrined as part of a core target of China’s 14th five-year plan. The PBOC has not detailed how it will make use of the big data that will become accessible from the widespread use of the digital yuan, but it could potentially be used to refine monetary policy to a degree not previously available to central bankers. Moreover, payments data could be used to fine-tune social-control policies such as the extensive surveillance of the Uighur population in China’s Xinjiang region.

Alibaba, WeChat, and other companies have tried to guard mobile-payments data—just as tech conglomerates in the West do. But Beijing has made it clear that commercial secrets will no longer be off limits. The Chinese Communist Party-controlled Global Times put it this way in a recent editorial: “No internet giant is allowed to become a super data base that has more personal data about the Chinese people than the government does, not to mention using the data at its own will.”

Broad usage of the digital yuan will provide the Chinese government with a wealth of detailed data about monetary trends, spending, and investment behavior in a society already subjected to an unprecedented degree of official scrutiny. And in the long run, the government’s actions could eliminate the influence of the companies that pioneered China’s digital economy.

This piece was updated on July 26 with the GeoEconomic Center’s latest Central Bank Digital Currencies tracker.

By invoking national security to rein in Didi Global, China has substantially complicated matters for its companies listing overseas—and their investors.

Rollout of the digital yuan

By The GeoEconomics Center

28. That’s the number of cities where China’s about to test drive the digital yuan. Our new animated map shows the rapid expansion planned for the mainland over the next eight months.

The digital Yuan, digital Euro, and the Diem: Key issues for public debate

As momentum grows for the development of CBDCs many policy questions remain unanswered. For insights into how CBDCs may develop, it will be important to watch where the current leaders, the People’s Bank of China (PBOC) and the European Central Bank (ECB), converge and diverge.

Image: A local resident uses his smartphone to scan the QR code through the mobile app of Tencent's WeChat Payment function to pay her purchases at a market in Yichang city, in central China's Hubei province, on April 29, 2019. Photo by Zhang Guorong/Oriental Image via Reuters.