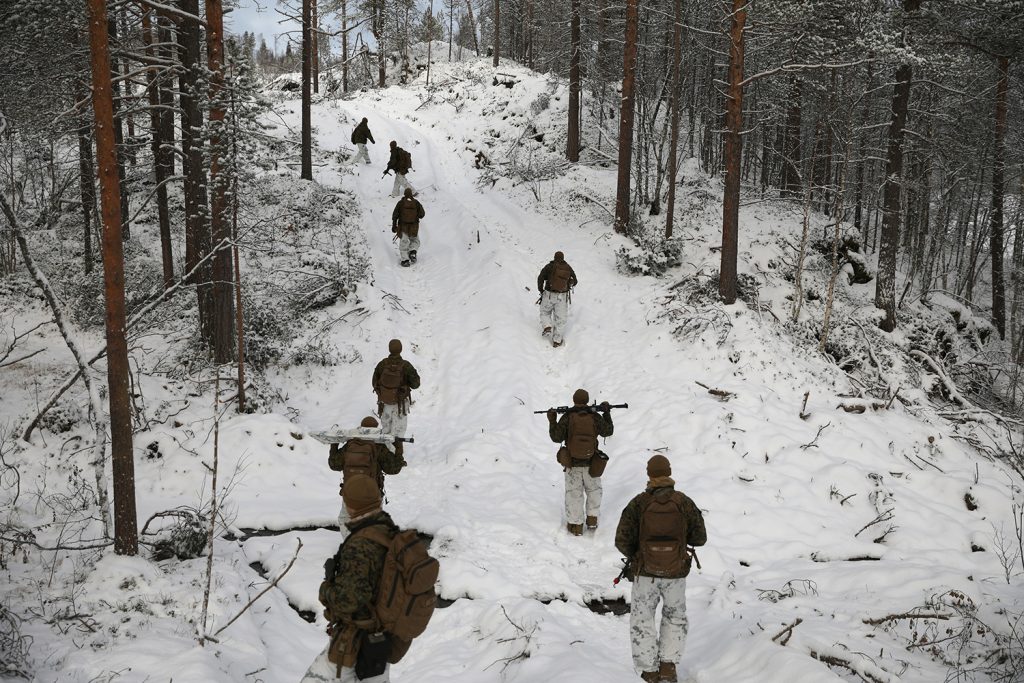 The Kremlin’s increasing military activities in the Arctic are worrying Norway—the only NATO member country that borders Russia north of the Arctic Circle.

Frank Bakke-Jensen, Norway’s minister of defense, outlined his concerns during a March 19 conference “Looking North: Conference on Security in the Arctic,” hosted by the Transatlantic Security Initiative in the Atlantic Council’s Scowcroft Center for Strategy and Security.

“Russian armed forces have significantly modernized during the last ten to twelve years. Its capabilities are increasingly integrated, giving Russia more flexibility,” he said. “The Russians have modernized their underwater capabilities. They’ve improved their ability to deploy troops rapidly over great distances. Russia is now also more capable in terms of conventional long-range precision weapons. Together, this reduces the warning time for NATO countries to hours and days.”

Also concerning are stepped-up Russian maritime activities just off Norway’s coast, he said. Russia recently started using its new airbase on Franz Josef Land, an archipelago in the Arctic Ocean. From this location, “Russia is now able to conduct air operations over vast areas in the Arctic,” Bakke-Jensen warned. “This Russian ability to reduce NATO’s freedom of movement is particularly worrying for transatlantic security.”

At the same time, he added, “China’s interest in the Arctic is increasing. China has defined itself as a near-Arctic state, and we expect it to be more active there in the future. China is also strengthening its icebreaking capacity, and its space-related activities also involve the Arctic.”

Bakke-Jensen said Norway welcomes the September 2020 establishment of NATO Joint Force Command Norfolk, co-located with the US Navy’s Second Fleet, to protect sea lanes between Europe and North America, including those in the Arctic.

“The Arctic is a very important area for cooperation between the United States and Norway. As we speak, the US Air Force is conducting operations with four of its B-1 bombers from Ørland [Main Air Station] in central Norway,” he said. “Allied activity in the region shows Allied cohesion, as well as our shared interest in maintaining the Euro-Atlantic space as a region characterized by freedom, peace, and stability. At the same time, the scope of allied activities must be measured to avoid unnecessary escalation and misunderstandings.”

Since 2013, said Bakke-Jensen, Norway has boosted its defense budget by 30 percent in real terms. And it already spends 2 percent of its GDP on defense. Specifically, it has invested in F-35 fighter jets, P-8 maritime patrol aircraft, and submarines.

“For Norway, it’s important to maintain the balance between deterrence and reassurance vis-à-vis Russia. NATO must also preserve that balance,” he said. “We want to be transparent and predictable, and we expect the same from Russia. Dialogue and communications about our intentions [are] important confidence- and security-building [measures]. Our neighbor has, over the past few years, become more expansive and less predictable, making Russia a strategic challenge and a demanding neighbor.”

The view from abroad: UK, Canadian, Danish, Norwegian, and US officials weigh in on Arctic issues

From the Canadian point of view, the Arctic “is a fundamental part of our heritage and identity and part of our future,” said Peter Hammerschmidt, assistant deputy minister for policy at the Canadian Department of National Defense.

It also presents “tremendous opportunities” as temperatures rise due to climate change, he said. “As we look out fifty years from now, we see ourselves as likely to be in a bit of a climate sweet spot for human activity: more arable lands, more accessible natural resources, [and] more open Arctic transportation routes,” he said. “It’s really a very attractive place to be on the planet, from the point of view of resources, climate, and migration. So we stand to gain. But from my perspective, to be able to take advantage of all the opportunities, we’re going to need to protect our north.”

Lone Dencker Wisborg, the Danish ambassador to the United States, said that while the challenges shouldn’t be exaggerated, NATO must remain “clear-eyed” about Russia’s military intentions in the Arctic.

“Even though the focus is mainly defensive, some elements might be used for more offensive purposes, and we have also seen China’s increased ambitions and interests in the Arctic relating to their desire for access to natural resources and sea routes,” she said.

Wisborg said Denmark recently approved a $245 million spending bill to boost Danish military surveillance, communications, and command-and-control operations in the Arctic, with Danish lawmakers agreeing to spend half of the money on drones to improve surveillance in Greenland, a semi-autonomous part of the Kingdom of Denmark.

“This is for us a testament to the importance we attach to this region,” she said. “Our military purpose is not to increase tensions, obviously, but to monitor and safeguard our national territory.”

Henning Vaglum, director-general of security policy at the Norwegian Ministry of Defense, noted that Norway faces a large concentration of Russian military power across its border—namely Russia’s Northern Fleet—and that Russia’s nuclear and conventional capabilities are on the rise.

This, he said, is “enabling Russia to project power in a new way, particularly through the development of new underwater systems and long-range precision strike capabilities. We are seeing at least the capability of holding Europe and others at risk in a different way. This capability development in itself is of strategic importance.”

The goal, said Vaglum, is “to manage our posture in the north so as to maximize the intentional deterrence effect, but also to minimize the potential of unintended escalation.” He added: “The Arctic should remain an area of stability and low tension. That requires deterrence but also requires us to avoid provoking unnecessarily. We believe it’s very possible to find that balance.”

Angus Lapsley, director-general, strategy and international at the British Ministry of Defense, said that as a non-Arctic nation, the United Kingdom tends to view the region “through a broader lens”—especially in terms of the Arctic’s importance to climate science and international trade.

“If the Northern Passage begins to open up, then over time that could start to impact global trade patterns,” he said. “For most Europeans, it will become the shortest route to Northeast Asia and the Pacific.”

Yet from a defense perspective, Lapsley said, the United Kingdom sees Russia “as the most acute security threat to the UK, and an awful lot of Russian capability is based in the High North. Therefore, we think about how that threat could play into our own security.” There is also “the realization that China is a systemic challenger to the global order,” and it is “quite obvious that China is interested in the Arctic.”

“The Greenland-Iceland-UK gap is as important—and also sea control of the North Atlantic—as it has been ever since the Cold War, and before that,” he said. “We continue to invest in being able to operate our submarines underneath the ice.”

Jennifer Walsh, US deputy under secretary of defense for policy, said Washington’s main priority in the region is to keep the Arctic secure and stable.

“For the United States, it’s also about looking at this region through the lens of defending our homeland. Cooperation with allies and partners is more important than ever, and I see this being particularly valued in the Arctic region,” she said, noting that the Pentagon has concerns about Russia and China.

“We are not looking to invite or provoke any type of conflict or escalatory actions, militarily or otherwise, in the Arctic. But we have been watching Russia’s behavior around the world,” Walsh explained. “And as it continues to develop its presence and its capabilities in the Arctic, we have to be able to connect some dots and think forward about what should we be anticipating from Russia in this region—even if its interests right now are focused on territorial defense. How far will it go to increase its oversight or control of northern sea routes?”

In much the same way, the Pentagon is keeping a close eye on Chinese activities in the Arctic.

“We know China is seeking a larger role in shaping governance and security issues to advance its Arctic ambitions,” Walsh said. “China’s behavior in other parts of the world should be considered in the context of ‘Will it follow suit in the Arctic region as well?’ We’re watching those, but no crisis right now—and our objective, as is everyone’s, is to prevent a crisis.”

The Arctic is a place of unusual international cooperation. Can that last?

The strategic importance of the Arctic has not yet been matched with corresponding US infrastructure investments in military, economic, and scientific research programs.