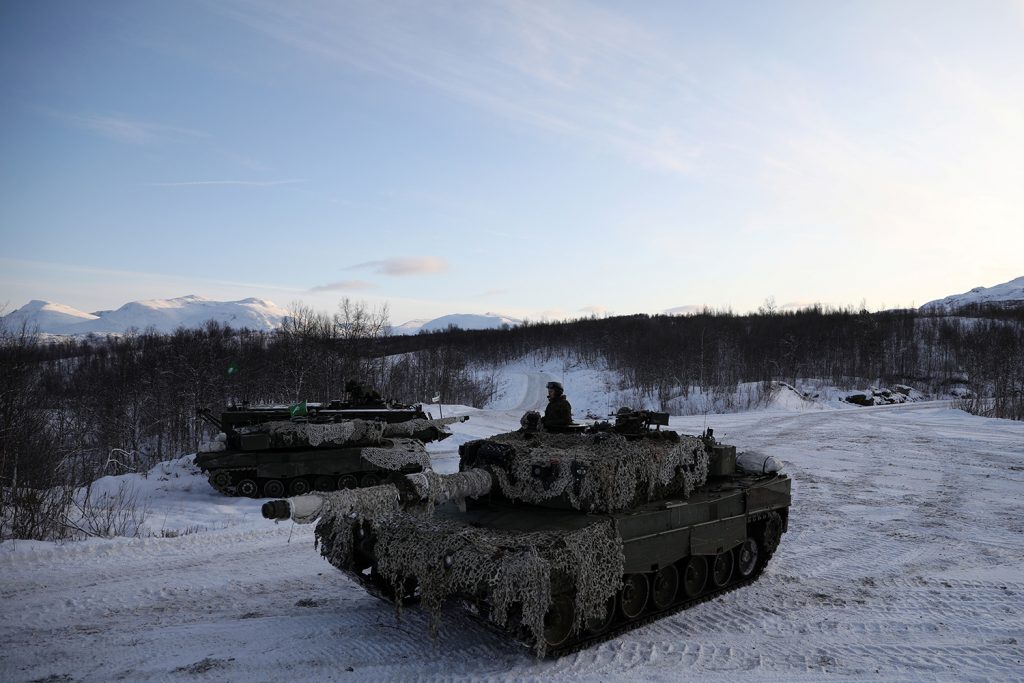 Søreide spoke on March 19 at Looking North: Conference on Security in the Arctic, hosted by the Atlantic Council’s Transatlantic Security Initiative in the Scowcroft Center for Strategy and Security. The event focused on geopolitical, security, economic, and environmental challenges confronting the eight countries whose territories lie north of the Arctic Circle.

Russia’s military has become “much more assertive and much less predictable” in recent years, “and this is deeply worrying” to Norway, warned Søreide.

“Maintaining the north of Norway as a strong, resilient, and prosperous region is a vital investment in both security and economic growth,” Søreide said. “What we do domestically in the north of Norway has major implications including with Russia”—with which Norway shares a 198-kilometer border.

She added that “there are enormous opportunities for science-based cooperation” with Russia. “The Arctic environment is quite fragile, and climate change takes place twice as fast in the Arctic as anywhere else on the globe,” she noted. “We have to act on this very quickly.”

As Russia assumes the Arctic Council chairmanship, unity will be vital

As she sees it, “One of the most important things the new administration can do is uphold the very strong unity in the Arctic Council,” which includes the United States, Norway, and Russia among its members. She explained that in the Arctic Council, there are governance structures that every member country must respect and obey. “Every country that takes an interest in the Arctic will have to be subordinate to these structures. That’s the only way it can work. That’s the way it’s been working for decades.”

The Arctic Council, which Søreide calls “the most important forum for Arctic issues,” was established in 1996 and has eight members. Another thirteen nations, including China, have observer status.

“Unlike many other parts of the region, the Norwegian Arctic is not just ice and snow. It’s a highly developed part of our country,” she said, noting that it’s “also home to some of our leading academic and research institutions, in areas such as marine research, fisheries, and natural-resource management. We also focus on clean and emerging energy technologies.”

During the Arctic Council’s May 20 ministerial meeting in Reykjavik, the current chair, Iceland, will hand over the two-year rotating chairmanship to Russia.

“Russia’s military buildup across the border from Norway has increased significantly over the past ten years. And this, of course, also is a strategic challenge for NATO,” said the foreign minister. “Russia has also substantially expanded both civilian and military infrastructure in the Arctic. It has developed new military capabilities with the strength and response capacity to strike targets from a longer distance and with greater precision.”

On the other hand, China’s interest in the Arctic has been limited mostly to research on climate and environmental issues, said Søreide.

“So far, they’ve been constructive and have respected international law, but this is an issue we follow very closely,” she said. “We’ve sent a very clear message to Beijing that the stability of the Arctic has long remained unaffected by conflict in other parts of the world.”

Will the status quo in the Arctic last much longer?

James DeHart, the US State Department’s coordinator for the Arctic, expressed cautious optimism about the region’s future.

“What gives me confidence [are] the facts on the ground,” said DeHart, stressing that he was not downplaying the risks that lie ahead for the Arctic. “This is a region at peace. In many respects, the status quo is enviable. There is amazing cooperation that takes place in the scientific-research community” and “remarkable cooperation” through the Arctic Council, including with Russia.

DeHart, who was appointed by former US President Donald Trump, said the previous administration wanted to have a balanced approach but was missing a climate dimension. “We now have a strong policy on climate. We’re raising the level of our ambition, including in the Arctic, and tackling black carbon and methane, with more to follow. There’s both change and continuity here, [but] the security risks and challenges obviously don’t immediately go away.”

DeHart added that while China poses some challenges in the Arctic, it represents less of a security threat than Russia does, at least for now.

“There’s no meaningful Chinese military presence at the moment in the Arctic,” he said. However, he followed up to say “The Chinese are interested in gaining a foothold in acquiring infrastructure and mineral rights,” and that’s concerning for the Arctic because “the standards [China has] brought elsewhere have not been high, their approach is less than transparent, and they’ve brought unsustainable debt burdens and environmental damage.”

Katarzyna Zysk, a professor of international relations at Oslo’s Norwegian Institute for Defence Studies, noted that “China has been very quiet. The problem is that Chinese economic activities are perceived through the lens of geopolitical influence,” she said. “The concern is whether an expanding Chinese [economic] presence may be followed by some form of security and military presence”—both of which will contribute to rising tensions in the region.

Zysk explained that “Russia controls nearly half of latitude north of the Arctic Circle, including most of the northern sea routes, vast natural resources, and [it has] an extensive and growing military presence and activities in the region … But at the same time, the Arctic is not an insulated security space. It is likely to get further intertwined with global issues and problems as it continues to open up to human activity, both commercial and military.

The danger of Russian opacity

“For the Arctic to stay safe, we need more openness than we see today,” said Thomas Nilsen, editor of The Independent Barents Observer, whose office is a ten-minute drive from Norway’s border with Russia. As a journalist, Nilsen has seen a “dramatic change” over the past few months in getting information from official Russian military sources.

“When something happens with Russia’s Northern Fleet, before, I could call the press spokesperson and get an answer. Today, I, as a foreign journalist, am not allowed to talk with him. I am only given the answer to send a request to Russia’s Ministry of Defense in Moscow,” he said, adding that if the ministry answers at all, it’s usually after a week or two. “And if I’m writing a story about a nuclear-powered submarine on fire only sixty nautical miles from the border of Norway, I’m sorry, I can’t wait.”

He added that no independent media outlets within Russia focus on such issues—and that very few nongovernmental organizations in Murmansk or other nearby cities can ask the critical questions that must be addressed urgently.

“Only two weeks ago, we had a huge Russian warship that, for the first time since the end of the Soviet Union more than thirty years ago, was sailing west of the Fisher Peninsula, very close into the territorial waters of Norway. My big worry is that when something goes wrong, they deny it. They don’t give public information. That can fuel misinterpretations.”

The specter of climate change trumps all else

Yet these problems could pale in comparison to a future of rising seas and melting ice caps.

Sharon Burke, a senior advisor to New America and director of its Resource Security Group, said she’s deeply worried about “an unstoppable, worst-case scenario” of potentially catastrophic sea levels triggered by the disappearance of Arctic ice and the release of methane gas.

“The future of the Arctic is exciting and terrible. It’s a new frontier, probably the last terrestrial frontier in the world,” said Burke, who is also a former Obama administration defense official. She noted that as new resources such as oil, gas, and rare minerals open up, more investments will have to be made in heavy icebreakers, more military bases, more intelligence assets, and a deepwater port in Nome, Alaska—a $505 million project authorized by the US Congress in December 2020 that is now ready to move forward.

“But as a climate-security expert,” said Burke, “my reaction is [that] if the Arctic is melted enough for all of that to be relevant, we are in big trouble.”

The strategic importance of the Arctic has not yet been matched with corresponding US infrastructure investments in military, economic, and scientific research programs.

Image: A soldier from the Second Tank Squadron of the First Battalion of the Northern Brigade of the Norwegian Army looks out from the top of a tank during "Reindeer 2", a Norwegian-U.S. military drill in Setermoen, Norway, October 30, 2019. REUTERS/Stoyan Nenov