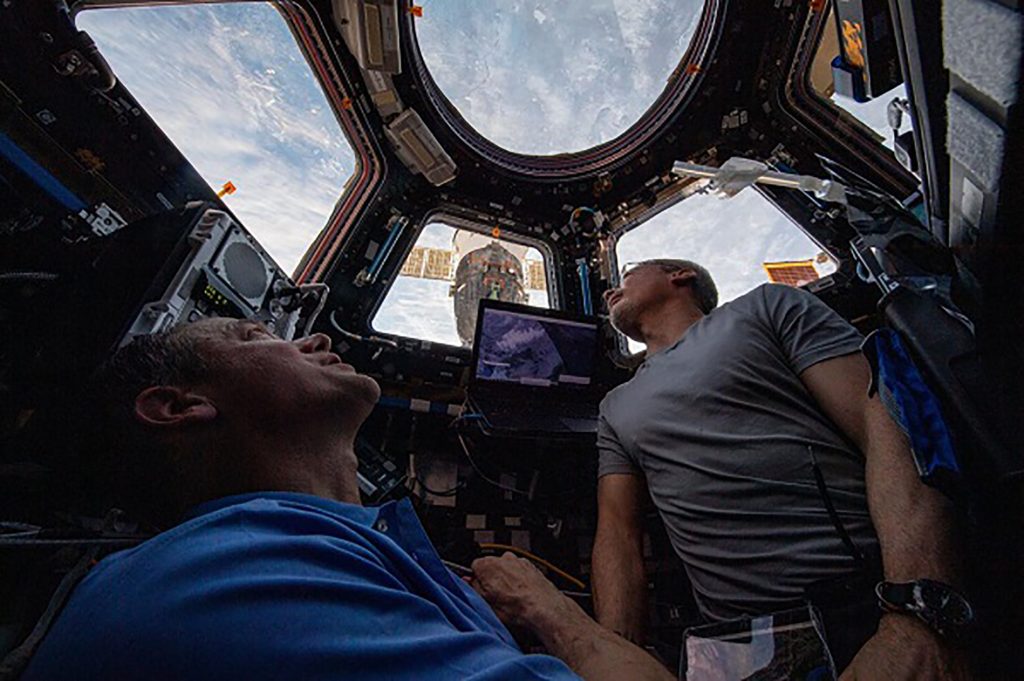 Technological developments are transforming the military’s use of the space domain. Formerly reliant on large, expensive space systems, militaries are now harnessing megaconstellations of small satellites to protect national security, while reusable launch vehicles are making space exploration cheaper. Moreover, as demonstrated by Ukraine’s use of commercial satellite services throughout the war with Russia, countries do not necessarily need to own space assets themselves to reap their benefits.

Now, adversaries aiming to disrupt or destroy US and allied space operations are moving away from physical attacks and toward cyber attacks, electronic warfare, and jamming. Below, the Atlantic Council’s Forward Defense experts give their sense of the latest challenges to space security and how the United States must face the future.

Marco Tantardini: Watch the democratization of space, as capabilities may fall into the wrong hands

Defense experts and officials discuss the transforming space threat environment and its implications for the future of space security as part of the Scowcroft Center’s Forward Defense Forum.

Prepare for unexpected attacks from competitors—and clashes with debris

The United States should join with spacefaring allies and partners to urgently address two serious challenges for the future of the space domain. First, the proliferation of orbital space debris is a major threat to future space activity if not mitigated effectively. Tens of thousands of large pieces of debris (ten centimeters or above) and millions of smaller pieces exist in low-Earth orbit (LEO), which can be catastrophic for space missions. The challenge of existing debris is compounded by the creation of new debris from anti-satellite (ASAT) tests. Russia’s dangerous ASAT test in November 2021, which created debris that put seven astronauts and cosmonauts in danger, demonstrates the impact of flagrant debris creation.

In addition, with the growth of commercial satellite capabilities and demand, the number of satellites in already-crowded orbits is projected to grow exponentially. If Kessler’s Syndrome is to be believed, the amount of debris in orbit could reach a point where it just creates more and more space debris—and if LEO becomes too dangerously crowded, the United States will be hard-pressed to launch into and conduct safe activity in outer space. While some progress has been made to mitigate orbital debris, the impending challenge of increasingly congested orbits requires better international coordination and alignment of regulatory frameworks.

Second, the proliferation of counterspace capabilities creates ongoing threats to space security that the United States must prioritize addressing in order to ensure the continuance of its space activity. The United States is reliant on space for all manner of things critical to its security, including positioning and navigation; civil and military communications; intelligence, surveillance, and reconnaissance; and tracking, assessing, and communicating military commands. China and Russia understand the asymmetric nature of the United States’ reliance on space for defense and security purposes and thus are increasingly developing counterspace capabilities to place US space and terrestrial assets at risk. China’s and Russia’s development and testing of direct-ascent ASAT capabilities and soft-kill satellite attacks such as dazzling and lasing should be carefully studied.

The United States must continue to lead the international community in setting norms and standards for safe and responsible space conduct and to enhance the resiliency of its space and ground-based assets, especially for US missile early warning, data relay, and electronic intelligence satellites that adversaries could place at risk.

—Clementine G. Starling is the director of the Forward Defense practice of the Atlantic Council’s Scowcroft Center for Strategy and Security

Look out for Chinese space developments

China’s multi-faceted and accelerated approach to conquering the space domain is the greatest challenge and gravest threat for the foreseeable future. In 2016, Chinese leader Xi Jinping stated that becoming an aerospace power has “always been the dream” for China. That dream requires China to dominate the domain and increase its influence over other countries’ policy decisions. With China’s desire to achieve this end state by 2045, the United States will require a “North Star vision” and “whole-of-nation action plan” to remain in the lead, wrote the authors of the State of the Space Industrial Base 2022 report.

China’s space ascension has military, economic, and political implications. After all, China’s race to become the leading space power is one critical step toward becoming a global superpower. To accomplish this, China is employing its entire suite of means and resources in space to advance its global ambitions, putting humanity at risk on Earth and in space. One way the United States can specifically counter Chinese investments is by ensuring that it has a resilient space-launch capability. When the US National Aeronautics and Space Administration (NASA) became reliant on Russia for astronaut space launches in 2011 after the Space Shuttle program was retired, the United States quickly realized the national security implications. Thankfully, there are now more players in the cargo and human space-launch arena. However, with China’s clear space aspirations, the United States continues to accept too much space-launch risk in the form of supply-chain disruptions, reliance on China’s rare earth minerals, tainted rocket fuel, and limited US launch locations—all of which threaten the sustainability of the country’s space missions.

The most logical path forward for the United States is to radically improve space-security cooperation across most space activities. Limiting the risk involved in space launch is a good place to start—that can be done by boosting supply-chain, rare-earth-mineral, and rocket-fuel resiliency with allies and partners. Moreover, the United States can utilize or develop alternate launch locations and new space-launch technologies with other leading spacefaring countries. If the United States is unable to access space (with cargo or human flight), it will inevitably hand over the space keys to China.

—Christopher P. Mulder served as the 2020–2021 US Air Force fellow at the Scowcroft Center for Strategy and Security. He now serves at the US Defense Security Cooperation Agency. The views and opinions expressed here are those of the author and do not necessarily reflect the official policy or position of any agency of the US government or other organization.

Watch the democratization of space, as capabilities may fall into the wrong hands

The entities possessing space capabilities once constituted a very small and exclusive club. But this is no longer the case, as the cost of “membership” is decreasing quickly. For example, the development and demonstration of SpaceX’s Falcon 9 vehicle wound up costing up to ten times less than NASA had projected, demonstrating a shift toward cheaper production and space launch—a shift that has only become steeper with time. Furthermore, the technical workforce capable of building a rocket and launch pad from scratch is now widely available across the world and, often, just one LinkedIn connection away. In addition, space personnel—from the West and the East—are much more mobile than in the past decades. The growing accessibility of this sector is putting space capabilities in new hands, with about seventy countries hosting national space agencies and more than ten thousand space companies in existence globally.

While such advancements have fostered great strides in humankind’s development of outer space, they are also making space accessible to myriad new actors, including malign actors who aim to leverage space for nefarious purposes. Moreover, the small launch vehicle industry in the Western world has been unable to keep up with the proliferation of human resources proficient in space technology; with a proportionally larger space workforce, more experts are willing to work as consultants across myriad smaller projects, including on jobs offered by non-aligned countries, putting US and allied space resources and knowledge in the wrong hands. This means that “space terrorism” could emerge as a large challenge in the next decade. Organized groups, operating through a network of small cells, could acquire the capacity to deliver small objects in LEO, thereby enabling them to detonate rudimentary devices in order to disrupt space operations and destabilize a growing economic sector.

In the case that deterrence fails, the United States and its allies and partners should be prepared to quickly respond to terrorist activities in space. To do so, US and allied strategy and operative plans must support a timely reaction in the event that one or multiple bombs are discovered to be in orbit. If disabling kinetic weapons in space proves unsuccessful, the United States must prevent a potential snowball effect by developing the capability to quickly clean debris created from attacks. Robotic explosive ordnance disposal squads and space firefighters must be ready to be called upon for duty to ensure such a scenario never becomes reality.

—Marco Tantardini is a nonresident senior fellow at the Forward Defense practice of the Atlantic Council’s Scowcroft Center for Strategy and Security and a former advisor for space policy to the Italian government.

Current space governance is far behind the wave of technological advancement sweeping the domain. Proliferated LEO, or building megaconstellations of small satellites in LEO, is crowding the orbit and could render it unusable in the decades to come. Spacefaring entities are also trekking further into the galaxy and considering how to utilize and preserve cislunar space—or the space between Earth and the Moon’s orbit. With industry leading the way, the commercialization of space is driving down the cost of launch and revolutionizing both who can operate in space and for what purposes. However, the $386 billion global space economy remains inadequately protected and, as General James Cartwright noted at our latest Forward Defense Forum, “where there is money, there is mischief.” In the absence of regulation, outer space is at the mercy of revisionist rivals China and Russia looking to advance an alternate international order.

Despite multiple companies championing best practices for the sustainable use of space, few international standards exist today. International space law is largely built upon the 1967 Outer Space Treaty, which lacks adequate guidance or guardrails for modern space activities. More recent standards, such as the United Nations’ nonbinding guidelines for long-term space sustainability, lack teeth or do not match the pace of current development, as is demonstrated by the twenty-year gap between the United States’ 2001 standards for de-orbiting satellites (which were reaffirmed in 2019) and the guidance passed just this fall.

Norms can provide parameters for acceptable behavior in a growing ecosystem, making it possible to identify and penalize actors who refuse to follow the rules. The National Space Council is taking steps forward, aiming to submit a new regulatory framework in March. The group is holding learning sessions to better understand commercial missions and craft a flexible regulatory approach that both fosters and protects a growing commercial space industry. The United States must proactively lead in the development of space norms, meaningfully engaging the commercial entities at the forefront of space advancement from the start.

This article is part of the 21st Century Security Project by the Scowcroft Center’s Forward Defense practice with financial support from Lockheed Martin. 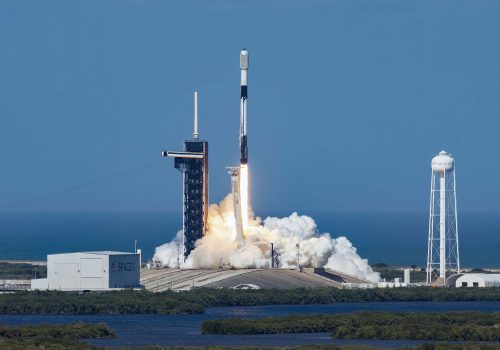 Commercial satellites are on the front lines of war today. Here’s what this means for the future of warfare.

Airpower after Ukraine By Julia Siegel

Commercial space companies are enabling critical warfighting functions in Ukraine and will continue to provide a lifeline in future conflict scenarios. 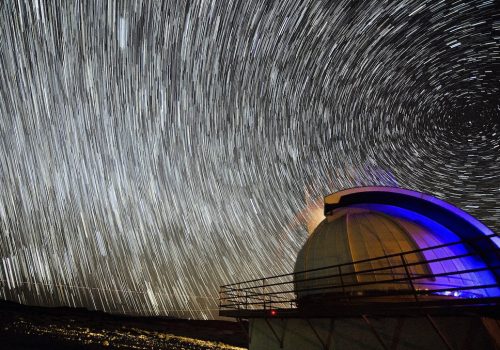 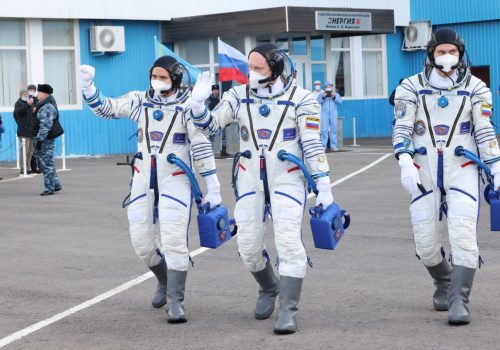 Russia’s pulling the plug on space cooperation. Should the world be worried?

Our experts break down Moscow’s extraplanetary plans after it pulls out of the International Space Station.

Image: This image shows: NASA astronauts (from left) Thomas Marshburn and Mark Vande Hei gaze out the station's cupola windows at Earth below. The Crew Earth Observations investigation provides researchers with key data from the perspective of the International Space Station to understand how the planet is changing over time. Photo via NASA/Cover Images and Reuters.