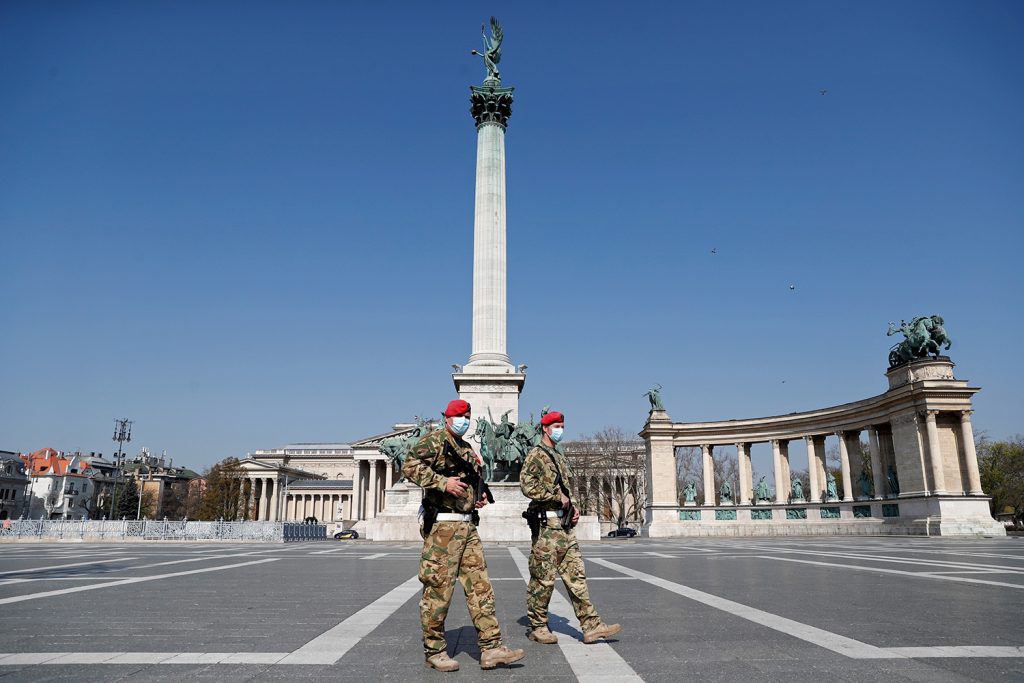 As of April 17, there were 1,763 officially confirmed coronavirus cases in Hungary, with 156 deaths and 12,401 people in home quarantine. The spread of the virus seems to be slower than in many other countries of the European Union, but it is unclear how these figures reflect the reality on the ground. The authorities are conducting roughly the same number of tests per capita as Poland, but substantially fewer than neighboring countries (such as Slovenia or Austria.) Hungarian officials themselves emphasize that actual infection figures could be ten times higher. Although wearing masks is not compulsory, the majority of the citizens of Budapest wear a protective gear when they are outside.

People generally try to keep the safety distance, too. The usually busy streets of the capital and the big cities are quiet in a way we have never seen before. According to the data provided by Google, the frequentation of transit stations (public transport hubs such as subways, buses, and train stations) in Hungary went down by 44 percent at the end of March, comparing the period before the restrictions. The same number in retail and recreation (like restaurants, cafes, shopping centers etc.) was -54 percent.

The country lives in a lockdown and there is not yet a light at the end of the tunnel: it is still too early for an official announcement about a possible end of the quarantine and the reopening of school and businesses.

Hungary announced relatively quickly restrictive measures after the first cases were reported in on March 4. One week later, the government declared a state of emergency. Public events were prohibited, universities were ordered to switch to online courses, and a couple of days later kindergarten and schools were shut down, too. The next step was to ban all stores, restaurants, and cafes from staying open later than 3 pm. Further restrictions on movement were introduced shortly after, and now people are only allowed to leave their homes to go to work or to run essential errands. Borders are closed, only Hungarian citizens are allowed to enter to the country, but they have to quarantine themselves after coming home. A curfew, however, has not been ordered yet.

Until the beginning of April, official guidelines were followed by Hungarians, but the beginning of the spring has complicated the situation. More and more people are now leaving their homes, especially in Budapest. This is a major concern because 60 percent of the people infected by the coronavirus live in Budapest and the neighboring county. The spreading of the virus is pretty similar to other countries. The key elements are the density of the population and the connection with the outside world. Budapest and Pest county are the economical hubs of Hungary where almost one third of citizens live. From Italy and France to the United States, we see a very similar pattern: the first centers of the epidemic are always the most dense and connected part of the countries, but unfortunately small town and rural areas will not be spared. We are witnessing this in Hungary, where rural counties are being hit.

This is why the government extended the duration of movement restrictions indefinitely on April 2 (but these will be reconsidered on a weekly basis). Local mayors were granted with new powers to stop people’s movements on Easter, a holiday when Hungarians traditionally visit their relatives in order to share a copious meal and to celebrate together.

Since the beginning of this pandemic, we have witnessed debates about the resilience of the healthcare system, the organization of local and national authorities, the lack of medical supplies, and the response to the already palpable economic crisis. But the most controversial issue is a heavily politicized one: the Coronavirus Act that the Hungarian Parliament passed on March 30, which granted the government unprecedented emergency powers.

The decision made headlines around the world and was criticized by international institutions.

Critics pointed out the potential dangers of the law, emphasizing that it extends the validity of government decrees issued under a state of emergency from fifteen days to an indefinite period. “This means that the government will be able to rule by decree without effective parliamentary oversight or a predefined end date,” Freedom House warned. “The law could also produce massive chilling effects because it introduces two permanent changes to the criminal code, punishing interference with the implementation of a quarantine order with up to five years in prison (up to eight years if it results in death), and expanding the offense of ‘dissemination of false information’ to include the obstruction an ‘efficient response,’ also punishable by five years in prison,” Freedom House added.

European Commission president Ursula von der Leyen also expressed concern about the Hungarian legislation. While saying EU countries may need extraordinary measures to tackle the pandemic, she said that she was “concerned that certain measures go too far—and I’m particularly concerned with the situation in Hungary.” More than a dozen EU Member States have signed a letter saying that they were “deeply concerned about the risk of violations of the principles of rule of law, democracy, and fundamental rights arising from the adoption of certain emergency measures.” The letter did not explicitly mention Hungary, and the Orbán government, in response, even joined the signees.

The Hungarian government and Prime Minister Viktor Orbán have rejected the criticism vigorously. They pointed out that despite the reports in international media, the law does not suspend the Parliament. According to the government communication, the opposite is true: far from suspending it, the emergency legislation keeps the Parliament in place and gives it, alongside the constitutional court, greater oversight powers over the government’s conduct throughout the emergency. Regarding the European Union’s criticism of the law, Mr. Orbán said Brussels “is preoccupied with us instead of the virus. We cannot have anything more important to do than saving lives. That requires cooperation and unity.” It means that in Hungary, while the government’s fight against COVID-19 is an absolute priority, political struggle is not forgotten.

Bálint Ablonczy is a journalist in Hungary.

While he stems the spread of the coronavirus, Orban is spreading the virus of illiberalism.

Viktor Orban had the opportunity in the last weeks to choose between becoming a statesman or a general. He opted for the latter. One wishes him well in dealing with the crisis. But this last decision is not really about handling the crisis.