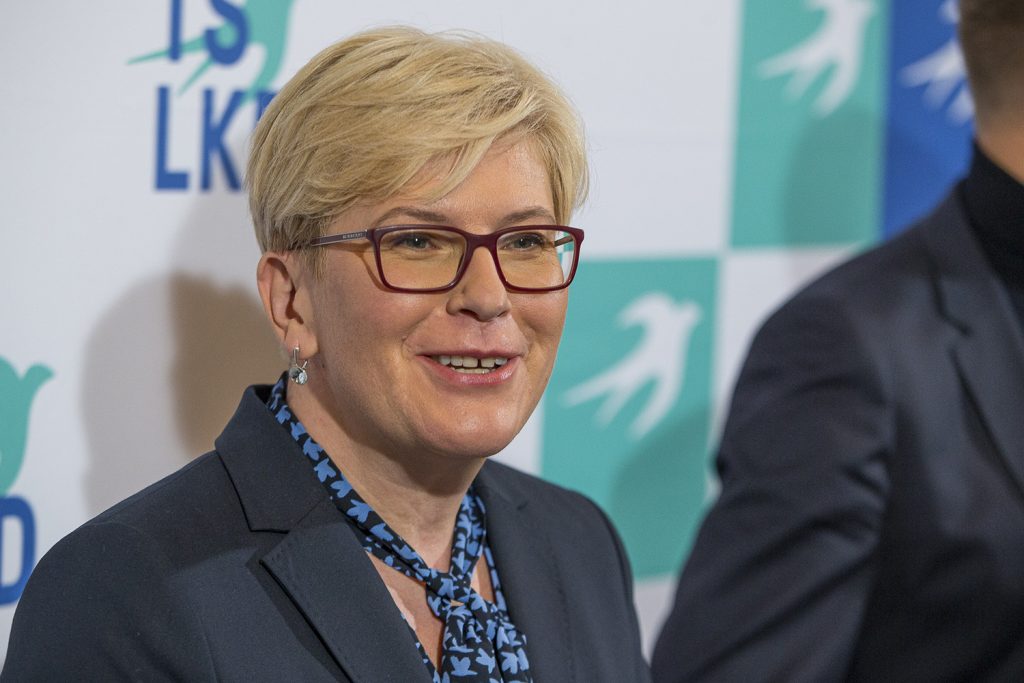 The second round of Lithuanian parliamentary elections on October 25 delivered a victory for the country’s conservatives, who will look to form a new center-right coalition. In a historic first for the country, three parties all led by women will form the government. This government will be particularly well positioned to lead Lithuania through the COVID-19 pandemic, achieve needed domestic reforms, and navigate the delicate situation in neighboring Belarus, where mass protests for democracy continue.

The conservative Homeland Union party won the election and tapped Ingrida Šimonytė to lead the government as prime minister. Since she ran for the presidency in 2019, the forty-five-year-old economist cemented her status as one of the country’s leading politicians. While not officially a member of the Homeland Union, she has emerged as the face of the party and had already served as Homeland’s finance minister (2009-2012) during the global financial crisis. Homeland’s two coalition partners are smaller parties: the conservative-liberal Liberal Movement led by Viktorija Čmilytė-Nielsen and the newly formed socially liberal Freedom party led by Aušrinė Armonaitė.

The anticipated female-led coalition is set to bring competence, experience, and stability. Specifically, the center-right government will make a collaborative tandem with President Gitanas Nausėda. Nausėda and Šimonytė, both economists, non-partisans, and center-right politicians, faced off against each other in the 2019 presidential election, but now could make a good team offering consistency, professionalism, and a commitment to the EU in an increasingly Eurosceptic Europe. This arrangement could look like 2009, when the Homeland Union led the government and former President Dalia Grybauskaite started her first term.

Lithuania’s new female-led government will face some significant challenges. Most importantly, they face a tense situation in neighboring Belarus, where mass women-led protests against falsified presidential elections have continued since August despite beatings, reports of torture, and mass detentions. Lithuania’s foreign policy has already played an important role as the Belarusian opposition presidential candidate Svetlana Tikhanovskaya found refuge in Lithuania, from where she continues to meet with US and European representatives and continues her campaign for democracy in Belarus.

The Homeland Union will be highly supportive of the Belarusian opposition and Ms. Tikhanovskaya. Homeland Union is known for its tough stance on Russia as a conservative party whose origins lie in the independence movement from the Soviet Union. Lithuania already recognizes Tikhanovskaya as the legitimate president of Belarus. Earlier this month, after considerable lobbying from Lithuania and the other Baltic States, the EU, the United States, the United Kingdom, and Canada each adopted sanctions against key Belarusian individuals deemed involved in the falsification of the election. All these countries no longer recognize Alyaksandr Lukashenka as the legitimate leader of Belarus. However, given that Vilnius and Minsk are just 100 miles apart and Lithuania and Belarus remain considerable trading partners, and as Lithuania remains cautious of Lukashenka’s main ally Russia, support for Tikhanovskaya is a sensitive foreign policy issue, especially if pursued without considerable coordination and support from the European Union and the United States.

Beyond foreign policy, Lithuania will have a full plate on its domestic agenda. The country has so far weathered well both the economic implications of the COVID pandemic and its spread, but concerns are rising on how it will weather the winter. After a carefree summer when the country did not enforce any social restrictions, COVID infections have started to rise with the onset of the fall and winter. The International Monetary Fund (IMF) has predicted that the Lithuanian economy will shrink 1.8 percent—the smallest drop in all of Europe—while 2021 could see a gross domestic product (GDP) growth of 4.1 percent, down from an expected 8.2 percent growth predicted back in April.

Additionally, the new government will contemplate tax changes and a growing public demand for education reform. Lithuania has among the highest educated population in Europe and has become an Information Technology (IT) and start-up hub. More than 90 percent of the population has a high school or college education, while the figure rises to 92 percent among women—the highest figure in the whole European Union. As a result, the fact that this year a third of the high school graduates failed the national mathematics exam has raised great public concern about the deterioration of math and life science education in the country. Such reforms will be difficult to achieve given the dwindling budget and rising debt.

Prominent female politicians are nothing new in Lithuania. The former President Dalia Grybauskaite won two terms and was considered one of the most successful and popular Lithuanian politicians. Lithuania has regularly had female leaders in positions such former Minister of Defense Rasa Jukneviciene and several speakers of the Parliament. The first prime minister after Lithuania gained independence and the last woman in the role was Kazimiera Prunskiene in 1990. This female political engagement has historic roots. Lithuanian women gained the right to vote in 1918, about two years before they did in the United States, while the first Lithuanian female presidential candidate Gabrielė Petkevičaitė-Bitė ran in the 1920s. Nonetheless, Lithuania is still behind European averages in terms of total number of seats women hold in Parliament.

The female-led parties of Lithuania’s new coalition government will be setting a new bar for the government and creating new political traditions. However, their initial focus should be on meeting domestic public expectations given the dwindling budget resources, especially in light of a looming European recession. During their last time leading the government from 2008-2012, Homeland Union professionally dealt with the global financial crisis, but also alienated some of the public with harsh austerity measures. The COVID-19 pandemic, tax changes, and education reform will require a delicate political balance. Nonetheless as former President Grybauskaite stated on Facebook: “This election is the best thing that could happen to Lithuania in this very complicated period…Three parties were led to victory by women. Women aren’t afraid to take responsibility in difficult times.”

Dr. Agnia Grigas is a senior fellow at Atlantic Council. Her three recent books include: The Politics of Energy and Memory between the Baltic States and Russia, The New Geopolitics of Natural Gas, and Beyond Crimea: The New Russian Empire.

US must remain committed to NATO and the Baltic States

By Sally A. Painter

The United States has profound interests in maintaining NATO and the sovereignty and security of the Baltic region. Now is the time for the United States to rise to this leadership role by deepening our commitment to NATO and supporting the Baltic countries to foster a strong and united transatlantic community.