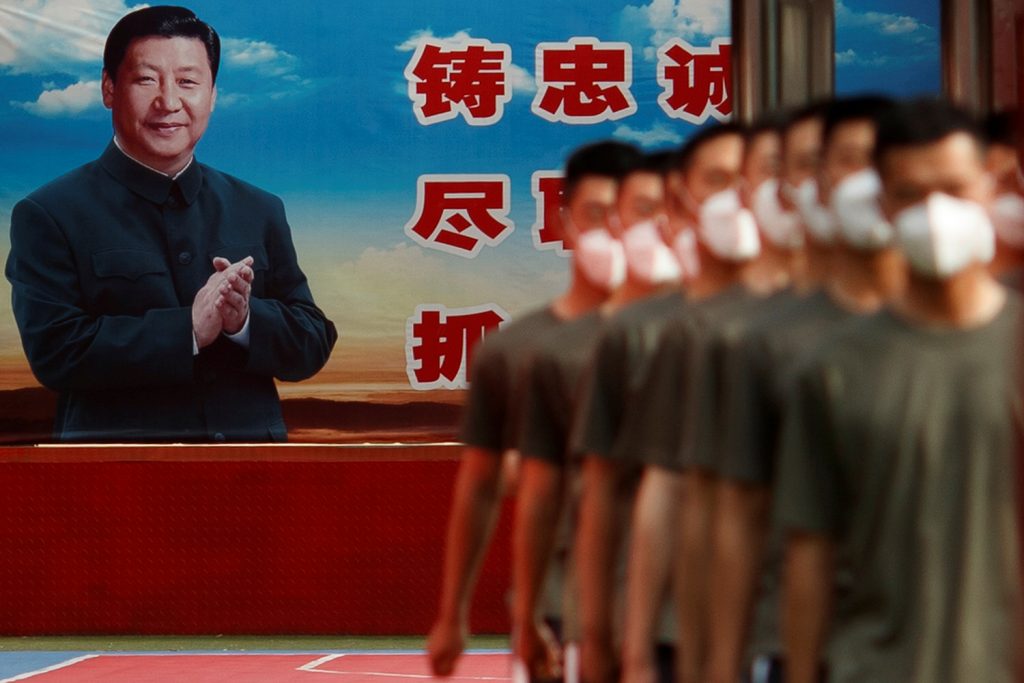 On the eve of the NATO Summit in London last December, the Alliance’s Secretary General Jens Stoltenberg addressed the need for a collective response to China’s emergence as a global power. “This is not about moving NATO into the South China Sea,” he stated, “but it’s about taking into account that China is coming closer to us—in the Arctic, in Africa, investing heavily in our infrastructure in Europe, in cyberspace.” At the summit, NATO heads of state diplomatically declared that China has become a concern: “we recognize that China’s growing influence and international policies present both opportunities and challenges that we need to address together as an Alliance.”

Indeed, it is hard, if not impossible, for NATO to avoid China. Beijing presents a full spectrum challenge to the transatlantic community—a challenge whose potential mirrors, if not surpasses, that once posed by the former Soviet Union. China’s $14 trillion economy is expected to soon surpass that of the United States, and Beijing exercises that might in a predatory fashion around the globe, including in the United States and Europe. China threatens to boycott companies and countries that criticize its policies, leverages its debt instruments against poor nations, and is buying up critical infrastructure around the world. Its acquisition of European ports has raised concerns of top NATO commanders who warn that such ownership could adversely affect the Alliance’s ability to use those facilities in times of crisis.

China is a technological challenge to the West. It is a leader in 5G communications, artificial intelligence, hyper-sonic weapons, and quantum computing. It has demonstrated repeatedly that it is willing to exercise that prowess against Western interests and security. Chinese cyber espionage and disinformation campaigns have become part of daily life for all NATO allies, including both their governments and private enterprises.

Beijing’s military is a major driver behind China’s technological edge and is developing and exercising global reach. China’s $260 billion defense budget has a purchasing power estimated to equal or exceed 70 percent of that of the US defense budget. China’s military cooperation with Russia continues to expand and the two exercise not only in the plains of Central Asia but in the Mediterranean and Baltic Seas. Chinese military forces are the pointy of end of the spear Beijing uses to undermine the rules based international order. Its maritime claims and aggressive activities in South and East China Seas stand among its more prominent actions.

And, China’s leadership relishes its role as an ideological challenge to the West and the latter’s practice of liberal democracy. China usesits economic, technological, and military power to promote globally its form of national authoritarianism. Beijing even asserts that its political model has provided the most adept and agile response to today’s coronavirus epidemic.

So how should NATO should respond to China’s growing global assertiveness? What should be NATO’s China strategy?

When considering this issue, it is important to recognize that the foundation for a relevant NATO role in a transatlantic China strategy has long been established. For decades, the Alliance has been operating around the world. NATO has led the International Security Assistance Force in Afghanistan since 2003. Its naval forces have patrolled against pirates off the shores of Africa, commencing with operation OCEAN SHIELD in 2008. As a member of the Coalition to Defeat ISIS, NATO provides training to military establishments across the Middle East. And, on a daily basis the Alliance addresses terrorism, cyber-threats, disinformation, and other global issues.

Most relevant to addressing China are the Alliance’s long-standing relationships with key democracies of the Indo-Pacific region. NATO established Global Partnerships with Korea, New Zealand, and Mongolia in 2012, Australia in 2013, and Japan in 2014. These relationships are predominantly consultative, but most of these partners have contributed to NATO missions, including in Afghanistan.

As the transatlantic community’s lead instrument for security collaboration, NATO can contribute to the former’s relationship with China in three important ways. As a multinational security forum, it can foster among NATO allies and partners a shared awareness of China’s capacities and activities that generate risk to and opportunity for the North Atlantic community. NATO has long served as an important forum through which its Allies and partners share intelligence data and assessments needed to foster and facilitate collaborative action.

Second, NATO can help develop and promulgate a transatlantic security strategy and posture regarding China. That strategy’s objectives should include the development of a cooperative relationship with China as well the dissuasion of China from undermining the interests of the transatlantic community. The latter would define the appropriate role and means for the Alliance to contribute to deterrence and when necessary defense against Chinese aggression that imperil those interests.

Third, NATO’s civilian and military capacities should be used to facilitate the defense and security component of a Western strategy addressing China—including in the tasks of engagement, deterrence, and defense.

The following are five actions NATO could undertake as part of its approach to China, none of which would require it to undertake a significant reprioritization of its current mission sets and all of which would support the aforementioned:

The Alliance should offer to establish a NATO-China Council. This would mirror the NATO-Russia Council whose roots date back to 1997. Its establishment would recognize and respond to the realty of China’s growing influence and reach. This forum would spur Alliance members to more seriously and comprehensively address in a coordinated manner the challenges posed by China. Its establishment would underscore that this dimension of great power competition is not between China and the United States but between China and the transatlantic community, one bound by shared values, interests, and history. And this forum could be used to identify and foster opportunities for constructive collaboration with China, such as counter-piracy operations.

Second, NATO should deepen its engagement with its Pacific partners, Australia, New Zealand, the Republic of Korea, Japan, and Mongolia. The consultative dimension of these relationships should be complemented with more regular and more robust military exercises (especially air, maritime, and special forces exercises) and operations, including those designed to ensure freedom of navigation. Such events under the NATO flag would be a useful complement to US maritime and air exercisers in the Pacific that have long featured the participation of European allies. Past US RIMPAC exercise series, for example, have included military aircraft, ships, and staffs from Canada, Denmark, France, Germany, the Netherlands, Norway, and the United Kingdom. In less tense times, China even participated in RIMPAC events.

Third, the Alliance should establish in the Indo-Pacific, perhaps in one of the region’s partner countries, a Center of Excellence (COE) and integrate officers and NCOs from selected partners into the Alliance’s Command Structure. Both initiatives would help increase the Alliance’s understanding of the Indo-Pacific region, institutionalize its presence in the region, and deepen these partners’ familiarization with NATO missions, structures, and protocols.

The Alliance should also establish a small military headquarters element in the Indo-Pacific region, perhaps embedded in the COE or in United States Pacific Command to help facilitate and coordinate NATO exercises and operations. It, too, could contribute to Alliance’s awareness of developments in the region and, if the opportunity emerges, Alliance collaboration with China.

These initiatives will take effort to launch and execute. Some allies will balk at adding additional missions to NATO and their own military forces when resources are already strained. But the aforementioned will not generate onerous costs and can build upon European, US, and Canadian military operations in the Pacific that are already the norm.

Moreover, European attitudes toward China have significantly hardened. Eighteen months ago, many Europeans were content to regard China as an economic partner, notwithstanding its authoritarian political system and aggressive conduct in the Pacific. That has since changed as Europe has experienced with increasing frequency Beijing’s diplomatic and economic belligerence toward those that criticize its actions and policies. In March 2019 the European Union formally described China as a “strategic competitor,” “an economic competitor,” and “a systemic rival promoting alternative models of governance.” Beijing pugnacious conduct during the coronavirus pandemic has only reinforced this new European perspective.

Beijing will likely balk at the offer of a NATO-China council as it will oppose an increased NATO presence in the Indo-China, especially one that fosters deeper political-military collaboration among the region’s democracies. Even NATO Partners in Asia may balk at elevating their relations with NATO out of a desire to avoid further complicating relations with China.

NATO may have to initiate its China strategy on its own, leveraging the territories Allies control in the Indo-Pacific and conducting its own operations and exercises in the region. That will demonstrate the commitment and determination necessary to earn the confidence and support of its partners for a more active Alliance presence in the region. China will then also be likely to demur, realizing that having regular communication with the world’s most powerful military alliance can be important means to avoid conflict, promote peace, and facilitate mutually useful cooperation.

A NATO strategy for China alone will be not a sufficient solution to the West’s increasingly tense relationship with Beijing. A coherent and effective transatlantic strategy for China will have to be comprehensive, one that leverages the full complement of diplomatic, economic, technological, social, and military capabilities and dynamics that define geopolitical power. For it to have maximum success it will have to combine the capacities of both Europe and North America and be reinforced through collaboration with community’s democratic partners in the Indo-Pacific.

As the institution that effectively marshals the military capabilities of the transatlantic community and one that has established relationships with the leading states of the Indo-Pacific, NATO is well positioned to foster that collaboration. Such NATO engagement would help underscore that Beijing’s belligerence risks provoking a geopolitically costly reaction from a vibrant and unified global coalition of democracies. NATO’s potential role in a transatlantic strategy regarding China should not be underestimated.

Image: Paramilitary Police officers march in formation near a poster of Chinese President Xi Jinping at the gate to the Forbidden City on the opening day of the National People's Congress (NPC) following the outbreak of the coronavirus disease (COVID-19), in Beijing, China May 22, 2020. REUTERS/Thomas Peter