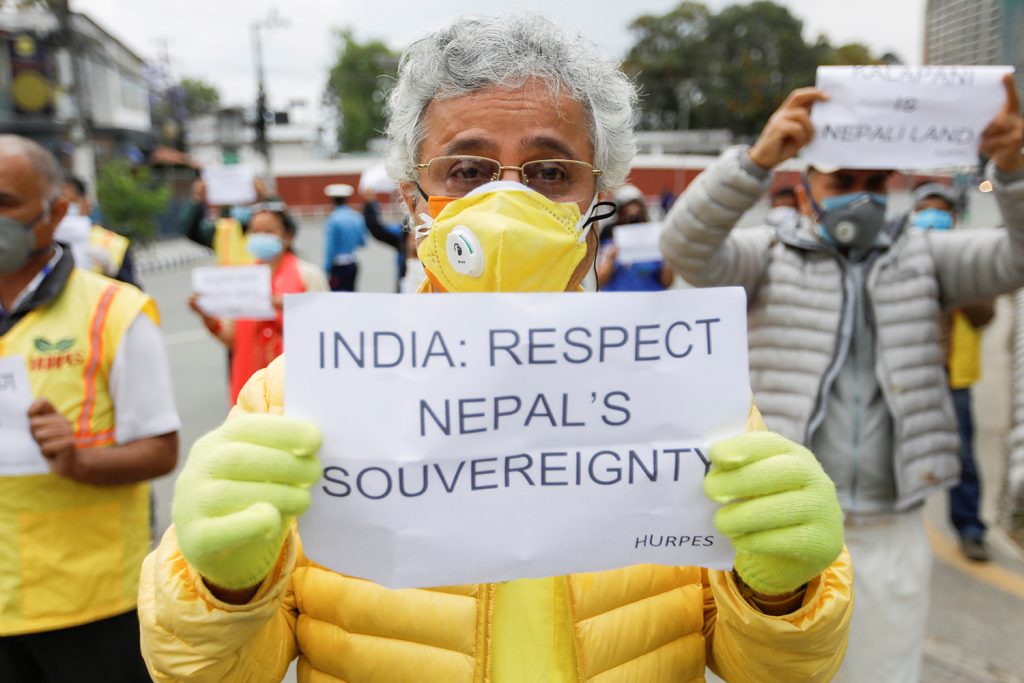 The two most culturally indistinguishable nations in South Asia, Nepal and India, appear to be at odds with each other over a strip of land. In early May, several people gathered outside the Indian embassy in Kathmandu to protest, despite a nationwide coronavirus lockdown. These demonstrations were in response to Indian Defense Minister Rajnath Singh inaugurating a link road on his country’s western Lipulekh Pass which is claimed by Nepal based on the Treaty of Sugauli in 1816 with the erstwhile East India Company. Following these protests, the Indian Ambassador to Nepal Vinay Mohan Kwatra was summoned to the foreign ministry in Kathmandu and was handed a diplomatic note objecting to India’s opening of the link road. Matters got even more serious when Nepalese Prime Minister K.P. Sharma Oli commented that the “Indian virus looks more lethal than [the] Chinese [or] Italian” referring to the entry of people from across its southern border during the COVID-19 pandemic.

While historically both India and Nepal have enjoyed a “special relationship” based on cultural ties, it appears that Nepal feels that this relationship is increasingly one which favors its bigger neighbor. From the Nepalese side, over the years, there have been accusations of India interfering in the country’s internal matters, and currently, this anti-Indian sentiment is reflected in the popularity of the hashtag #BackoffIndia which is trending across social media platforms.

Nepal is a landlocked country in the Indian subcontinent sandwiched between two behemoths, India and China. With Nepal separated from China by the imposing Himalayas, it shares a lot of cultural, political, and traditional commonalities with its Indian neighbor. For example, both countries have Hindu majorities and share the Devanagari script as the basis for Nepali and Hindi.

Although “ancient” in its origin, the relationship shared by Nepal and India was formally recognized and made official by the 1950 Indo-Nepal Treaty of Peace and Friendship. Signed by the then Prime Minister of Nepal Mohan Shamsher Jung Bahadur Rana and Indian Ambassador to Nepal Chandreshwar Narayan Singh, the treaty sought “to strengthen and develop [their] ties and to perpetuate peace between the two countries.” Freedom of movement was also established for nationals of both countries, allowing the right to live, work, and study in both countries for their nationals.

Nevertheless, the implications of the treaty made Nepal heavily reliant on India for trade, especially for transit of imports and exports from the sea, as Nepal does not have access to the ocean. This trade relationship was further solidified by the Indo-Nepal Trade and Transit Treaty of 1960, through which the former kingdom of Nepal became dependent exclusively on India for all of its imports.

This over-dependence was exposed decades later in 1989, when India imposed an economic blockade due to its annoyance and concern at Nepal’s developing relationship with China. The Peace and Friendship Treaty signed in the 1950s made it impossible for Nepal to import arms from any other country besides India. When Nepal ordered small arms and anti-aircraft guns from China without consulting India, imposed an additional 50 percent tariff on Indian goods, and reduced the duty on Chinese goods by 10 percent, India retaliated by imposing a further blockade. These arms deals may have been a response by the Nepalese government to comments from Indian security experts that “like Belgium, Nepal is unable to protect its own security and hence militarily becomes a porous frontier between India and China.” Although India viewed its blockade as punishment for Nepal’s noncompliance with the treaty, it reminded Nepal of its relative powerlessness—that its sovereignty was not a right that it enjoyed but a privilege granted by the Indian government.

Another blockade occurred in 2015, but this time imposed by the Terai indigenous tribes of Nepal, which have a historical affinity with India. Following the visit from Prime Minister Narendra Modi of India in 2014, Nepal announced a new constitution that included provisions against the Madhesi people from the Terai region—which borders India—at a disadvantage, such as having lower representation in parliament. The Madhesi responded by informally imposing a blockade of all goods between Nepal and India. Reluctance to terminate the blockade by the Indian central government demonstrated their sympathy for the Madhesi people, which forced the parliament in Nepal to pay more attention to this oppressed minority group and led to several months of acute shortages of fuel and medicine.

Nepal’s assertive nature in recent years is seen by observers as a product of its greater closeness to China, triggered possibly by as a counter-reaction to the country’s over-dependence on India. For example, in terms of infrastructure, the deal for a rail link to Tibet is seen as a way to end an Indian dominance over Nepal’s trade routes by increasing connectivity with Beijing. Moreover, over the years China has not only been involved in the development of infrastructure in Nepal but has also tried to voice its opinions in Nepal’s internal politics. Unlike India, however, it did not favor a federal structure in Nepal and suggested to Nepalese politicians that they should decrease the number of total provinces and stay away from ethnicity-based federalism.

It appears that the concern of the late Indian journalist B.G. Verghese about the blockade of 1989 is coming true: “the current confrontation, if pursued, may alienate the common people of Nepal and a whole new generation may be ‘inclined to lean towards China.”

The protests in Kathmandu over the recent opening of an Indian link road up to Lipulekh for the Kailash-Mansarovar pilgrimage to Tibet has erupted brewing frustration among Nepalese towards their south neighbor. Although such a road would help maximize the benefits of India and Nepal’s shared 1,800 kilometer (1,118 miles) open border, the project has ignited the long-running concerns about Nepal’s sovereignty, with many people in Nepal decrying the move on Twitter with the hashtag #BackoffIndia.

Nepal considers Limpiyadhuru, Kalapani, and Lipulelh as part of its national territory as per the Treaty of Sugauli with the former East India Company, whose successor state is the present-day Republic of India. Cartographers in India, however, consider it a part of the Indian state of Uttarakhand. During the 1962 Sino-Indian War, Indian forces entered these territories after the Indian government consulted the former ruler of Nepal and have not retreated from this area since. Yet the cartographic dilemma is a product of colonial days as well: the East India Company maps of 1816 and 1856 show this region as part of the Kingdom of Nepal, but afterwards, future British cartographers started including this region as a part of British Indian territory possibly due to strategic reasons.

Stepping aside from the Big Sibling Syndrome

India and Nepal’s “special relationship,” clearly leaves Nepal at the short end of the stick. As the small and landlocked partner, many Nepalese feel that Nepal’s reliance on India for arms, ammunition, imports, and connection to the outside world, keeps the country from being an equal partner in treaties. The history of blockades and the recent dispute over the Kalapani region expose that the two countries’ cultural affinity is undermined by geopolitical concerns. Nepal’s growing relationship with China—India’s major fear—is simply a result of that. This balancing is not unique to Nepal, but is something practiced by other smaller countries in South Asia including Bangladesh, the Maldives, and Sri Lanka. In order to maintain an amicable relationship with Nepal and avoiding any future bursts of anti-Indian sentiment like the #BackoffIndia hashtag, New Delhi must consult more with Kathmandu and reassure its smaller sibling that policies meant to increase ties between both neighbors—such as the building of the link road—are beneficial to citizens of both countries, rather than come at the expense of the Nepalese.

Dr. Rudabeh Shahid is a nonresident senior fellow at the South Asia Center and a postdoctoral research fellow at the “Rethinking Civil Society” Project in the Department of Politics, University of York, UK.

Image: FILE PHOTO: Activists affiliated with 'Human Rights and Peace Society Nepal' holding placards protest against the alleged encroachment of Nepal's border by India in the far west of Nepal, near the Indian Embassy in Kathmandu, Nepal May 12, 2020. REUTERS/Navesh Chitrakar/File Photo