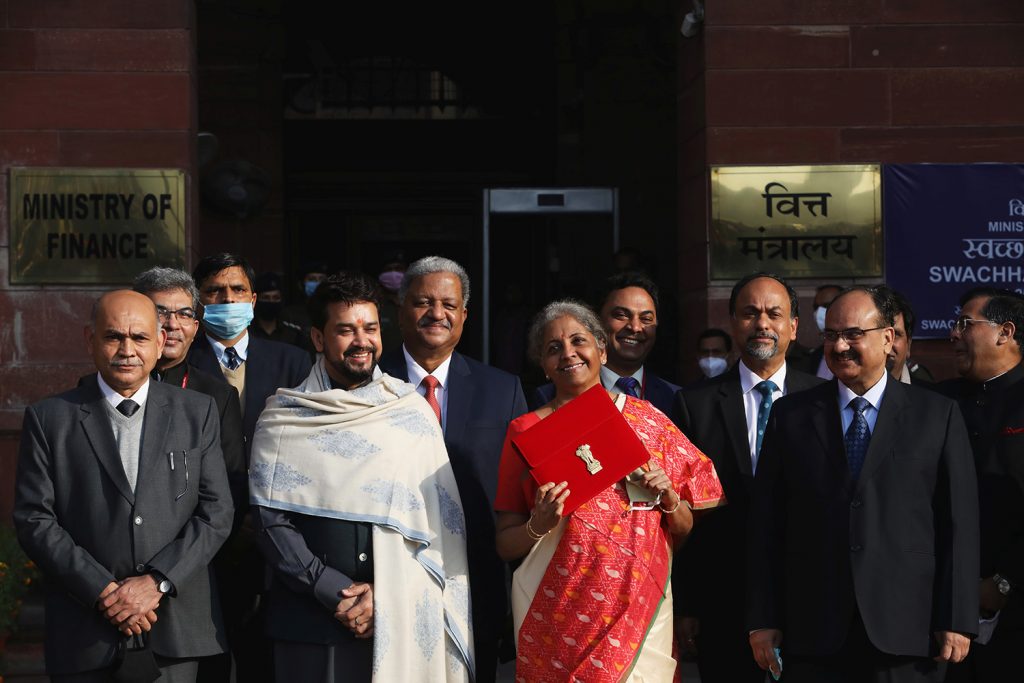 The Indian government recently announced a new budget aimed at providing a major boost to healthcare and infrastructure development. The budget is the country’s latest bid to spark a post-pandemic recovery and advance Indian Prime Minister Narendra Modi’s vision of Atmanirbhar Bharat—an economically self-reliant India. In a speech presenting the budget, Indian Finance Minister Nirmala Sitharaman outlined six key pillars on which the budget is based: health and well-being; physical and financial capital and infrastructure; inclusive development for an aspirational India; reinvigorated human capital; innovation and research and development; and the concept of “minimum government and maximum governance.” While supporters argue that the 2021-2022 budget provides strong stimulus for long-term sustainable growth, critics claim its approach to fiscal consolidation is too aggressive.

Here’s how Atlantic Council experts are assessing the budget.

“India’s latest Union Budget is the first of the post-pandemic era, and it comes as the central government looks to revive growth and employment following one of the worst economic downturns in recent memory. Faced with this monumental task, the budget offers a refreshingly bold set of proposals that will lend positive momentum and much-needed fiscal support to the Indian economy, even if it means floating higher deficits for a period. Healthcare and infrastructure stand out as important areas of focus in the budget through critical expenditure that will help India build a foundation for public-health resilience and economic growth. Global investors have also welcomed the push to privatize public-sector banks and raise the foreign direct investment (FDI) equity caps on the insurance sector from 49 to 74 percent. Both are important and overdue steps suggesting there is still appetite for economic reform in Delhi. Another bright spot that deserves recognition is the relaxation of rules governing ‘one-person companies.’ This understated measure will be critical to fully unlocking the power and potential of India’s startup ecosystem and entrepreneurs.”

“Of course, the areas omitted from the budget are equally as important as those that made it into the final text. And here, the picture is somewhat mixed. On the bright side, the budget did not involve a reversion to economic populism or protectionism—as some observers feared in the run-up to Sitharaman’s speech, given the heavy emphasis on building up a ‘self-reliant India.’ Customs-duty hikes were limited in scope, though manufacturers are likely to keep a watchful eye on proposed efforts to review customs-duty exemptions. FDI reforms—outside the insurance reforms—were also limited. By the same token, efforts to tighten FDI rules in sectors like e-commerce did not emerge through the budget. Yet the possibility of rule changes looms large. This leads to a final point: Though the budget has buoyed investor confidence, gains can quickly unravel if India pushes forward with sudden regulatory shifts that penalize companies that have invested in the Indian market. Clarity and predictability in the policymaking process are the need of the hour, and the surest way to achieve Modi’s goal of improving the ease of doing business and getting the economy back on track.”

The government must ensure fiscal consolidation without sacrificing growth

“India’s Union Budget for fiscal year 2021-2022 represents an expansive effort by the government to shore up the country’s nascent post-COVID economic recovery. The blow to the domestic economy in fiscal year 2020-2021, caused by the global pandemic and the consequent national lockdown, has been severe, with growth rates remaining in negative territory for much of the fiscal year. As India limps back from a recession, the new budget provides a belated but much-needed fiscal stimulus in the form of robust investments in health and human services and infrastructure to fast-track economic growth. While the fiscal year 2020-2021 budget deficit is coming in at a higher-than-expected 9.5 percent of gross domestic product (GDP), the current budget projects that number to be brought down to 6.8 percent of GDP in the next year—as one-time, pandemic-linked food subsidies decline and expenditure growth is met through an ambitious program of disinvestments and asset monetization.”

“As enduring pandemic-related risks remain at large, staying on course with budgeted capital-expenditure programs will be crucial in aiding the economy to get back on track and returning output to pre-COVID levels. A significant ramp-up of 26 percent in capital expenditure fueled by increased spending on health infrastructure, investments in the transport sector, and a host of initiatives to boost manufacturing and exports should yield big gains in productivity and enhance competitiveness. Although details remain elusive, step-ups in financial-sector reforms to underwrite infrastructure growth include the creation of a bad bank to absorb toxic banking assets, the launch of a specialized development finance institution, and an increase in limits for FDI in the insurance sector from 49 percent to 74 percent.”

“With no significant increase in gross tax receipts envisaged, revenues from the execution of scheduled disinvestments and monetization of land and brownfield infrastructure assets will be paramount to balance the current budget and contain short-term borrowing. The government will have to put its foot on the gas pedal to take advantage of excess market liquidity and speedily implement the planned Life Insurance Corporation of India initial public offering and strategic stake sales in several public-sector companies, including Bharat Petroleum Corporation Limited, the Shipping Corporation of India, one general insurance company, and two public-sector banks. The slated privatization of Air India and other loss-making enterprises will be critical to stop the hemorrhaging of government funds, but will be unlikely to contribute significantly to the exchequer at deeply discounted sticker prices.”

“Markets have clearly reacted favorably to a budget that has set aside fiscal concerns for the time being and focused primarily on reviving economic growth through accelerated spending. However, as the economy starts to show signs of a real recovery, investors will expect the government to pick up the pace of consolidation to trim the fiscal deficit to a target of 4.5 percent of GDP by fiscal year 2025-2026. To achieve this relatively modest level of fiscal consolidation in the medium term, all eyes will remain focused on the government’s ability to manage an aggressive agenda of strategic disinvestments and public-debt sustainability without sacrificing growth.”

The budget has potential to foster a sustainable recovery

“Those for a larger fiscal stimulus should be happy. The fiscal deficit in fiscal year 2020-2021 rose to 9.5 percent of GDP, with 1.5 percent of GDP coming from one-time transparency, making it the highest in India’s history. The fiscal year 2021-2022 deficit is projected to decline to 6.8 percent of the GDP; still very high—similar in size to India’s fiscal deficits after the 1991-1992 and 2008-2009 crises. The recovery so far is uneven: more K-shaped than V-shaped. Several key sectors such as oil and gas, cement, fertilizer use, and tourism and travel—especially air traffic—are still down. And there is unevenness as well between corporates; micro, small, and medium enterprises; and the unorganized sector. The unemployment rate has improved, but employment remains below pre-pandemic levels. The huge increase in demand for back-breaking Mahatma Gandhi National Rural Employment Guarantee Act (MGNREGA) work in fiscal year 2020–2021 shows that the impact on livelihoods and its attendant social impacts have been huge, with eighty to one hundred million people projected to fall back into poverty.”

“Will the budget nurture and widen the recovery? With projected real GDP growth of over 10 percent in fiscal year 2021-2022, India’s GDP would go back to pre-pandemic levels. To achieve this, the budget puts large sums into capital expenditure—an increase from 12.5 percent of expenditure pre-COVID to 16 percent of expenditure for fiscal year 2021-2022. To help finance higher capital expenditure, privatization and monetization is proposed. But [that] will require a transparent process and focused implementation, with a single agency responsible. Global experience shows that delaying financial-sector cleanup is the surest way to a weak recovery. The elephant in the room is the rising ratio of bad loans projected by the Reserve Bank of India to reach almost 14 percent by June 2021. The announcement of a bad bank is a recognition that the process for declaring insolvency and bankruptcy takes too long to resolve systemic bad loans. The announcement that two state banks will be privatized is the first signal of reversing the 1969 bank nationalization.”

“A high priority has been given to health, with an increase of 37 percent over the previous budget. If India can vaccinate its entire population of 1.4 billion on a war footing in fiscal year 2021-2022, it will have a huge impact on lives and livelihoods and will help widen the economic recovery currently underway. The budget relies on recovery to help the poor, but employment will not recover as quickly as GDP. Cash transfers and free food rations to poor families should have also been continued for another six months. The One Nation, One Ration Card for migrants should be expedited and will encourage migrants to return to where they were working. By continuing down the path of further import protection, questions on India’s Atmanirbhar Bharat will remain. With the public-debt-to-GDP ratio at 90 percent, the budget has its risks. But the intent to grow our way out of this crisis is the right one—and had to be taken.”

Ajay Chhibber, nonresident senior fellow at the Atlantic Council’s South Asia Center. To read more of his take on India’s budget, see “The Finance Minister’s 2021 budget has thrown a huge lifeline, but will it work?”

India’s budget reflects the challenges of a post-COVID economic recovery.

“The stakes were high for India’s new budget. The annual ritual this year came on the heels of a historic economic slump, high unemployment, and a capital besieged by irate farmers. India’s budgetary response represents a cautious approach—one that reflects the challenging constraints facing an economy in the nascent stage of recovery.”

“Healthcare and infrastructure spending are set to receive sizable increases. But Modi’s budget was also mindful of managing India’s growing debt. The government seems intent on reining in inflation and managing its credit rating. Privatization plans could help generate revenue for expanded health, education, and welfare enhancements, but recent history shows execution will be far from easy. Similarly, the creation of a bad bank would be a significant step to address the lingering problem of non-performing loans. Finally, proposed tariff hikes reinforce a longstanding trend that could force reliance on the domestic market, not exports, to accelerate growth. Whether India’s modest budget and associated reforms will be enough to buoy consumer confidence and private investment is an open question.”

The time is ripe for Kashmir peace talks, and the Biden administration, with Secretary Blinken at the helm of foreign affairs, can play a constructive role in bringing India to the table. Why should the United States promote the Kashmir peace process? What could it realistically do?

FAST THINKING: Get up to speed on India’s new mass protests

Image: India's Finance Minister Nirmala Sitharaman holds up a folder with the Government of India logo, as India's Chief Economic Advisor Krishnamurthy Subramanian and Minister of State for Finance and Corporate Affairs Anurag Thakur look on as she leaves her office to present the federal budget in the parliament in New Delhi, India, February 1, 2021. REUTERS/Anushree Fadnavis