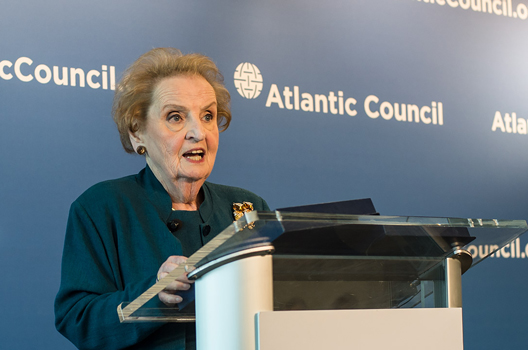 The Atlantic Council mourns the passing of Secretary Madeleine Albright. A tireless advocate for democratic values and a thriving transatlantic community, Secretary Albright used her unparalleled diplomatic savvy to advance freedom, prosperity, and peace around the world. As the first woman to be named US secretary of state, Secretary Albright was a diplomatic trailblazer who inspired generations of women and girls globally.

“In her travels with the Atlantic Council around the world,” said Atlantic Council President and CEO Frederick Kempe, “she inspired women determined to make a difference in the world and democracy advocates of all stripes.”

As Emma Ashford, resident senior fellow at the Council’s New American Engagement Initiative, pointed out on Twitter, Albright was a role model because she was “visible and active at the highest levels of foreign policymaking at a time when women were the exception in that space, not the rule.”

Below find more remembrances from Atlantic Council staff and board members.

Melanne Verveer: ‘Advancing progress for women and girls around the world’

Henry A. Kissinger: ‘[Her] very existence provided an assurance of decency, competence, and commitment in a fractured world’

Daniel Fried: ‘Madeleine loved America with the fierce devotion of an immigrant-refugee’

Barry Pavel: ‘A way of touching people before she even said a word’

Ian Brzezinski: ‘All energy, all the time’

Carl Bildt: ‘For decades, she was the indispensable American’

Richard L. Morningstar: ‘A person with no pretense’

Anna Wieslander: ‘A role model and an inspiration’

‘Advancing progress for women and girls around the world’

As US ambassador to the United Nations (UN) and secretary of state, Madeleine became a powerful voice for the United States on international affairs and a global force for good. Less well known are her significant contributions to advancing progress for women and girls around the world as central to US foreign policy.

When she got to the State Department, Madeleine established the first office on women’s issues—the beginning of what would ultimately evolve into a close integration of gender into US foreign policy. She instructed the State Department to pay closer attention to these issues, including by reporting on the condition of women in diplomatic cables, adding violations of women’s rights to the Human Rights Reports, creating the Vital Voices Democracy Initiative, and scheduling meetings with women during her travels as secretary. Early in her tenure, she met with Afghan women who were refugees in Pakistan, having been forced to flee Taliban rule. She promised never to forget them, and up to the time of her death, she remained focused on the plight of women in Afghanistan—including as co-chair of the Atlantic Council’s strategic dialogues on the future of Afghanistan. She and Hillary Clinton forged a close bond on these issues and a close friendship. Madeleine invited her to join the “Frank Group,” which had an exclusive membership: the two of them (and Madeleine’s chief of staff and myself). It provided a rare opportunity to come together from time to time to talk about the issues—and whatever else was on our minds.

As a refugee, Madeleine never forgot the horrors perpetrated first by the Nazis and then the Soviets. She worked valiantly to help strengthen the new democracies and was proud to be the chair of the National Democratic Institute. To travel with her from Prague to Kosovo was to understand what she meant to those who savored their new freedom and independence and labored to build nascent democracies. In her second-to-last book, Fascism: A Warning, she worried about the rising authoritarianism and the democratic recession that was taking place all over the world, including troubling signs here at home. As the granddaughter of immigrants from Ukraine, I often talked to her about the situation in my ancestral homeland, and I know that despite her decline, she was closely following the devastating assault there today and the very perils about which she had warned. I already miss her voice on these issues and so many more.

—Melanne Verveer is a former US ambassador-at-large for global women’s issues and a member of the Atlantic Council Board of Directors.

‘[Her] very existence provided an assurance of decency, competence, and commitment in a fractured world’

Madeleine Albright was one of the people whose very existence provided an assurance of decency, competence, and commitment in a fractured world. As an immigrant, her gratitude to America combined with her service to the principles of freedom and her conviction that the malign events of twentieth-century history not be repeated.

She was a distinguished public servant and a thoughtful and respected analyst of world affairs. She carried out a humanitarian purpose with a delightful sense of humor. She was a treasured friend.

Madeleine has left us at a time when the world witnesses new challenges to democracy and freedom. Her memory will remain to recall us to our duty.

—Henry A. Kissinger is a former US secretary of state, former US national security adviser, and Atlantic Council board member.

‘Madeleine loved America with the fierce devotion of an immigrant-refugee’

I first met Madeleine Albright in the early 1980s at a small dinner party. She had just come back from communist Czechoslovakia, a trip during which she was smuggling in pro-democracy (i.e. “subversive”) literature, at some personal risk. My wife and I had just returned to the United States from an overseas tour in Leningrad, so we spent the evening swapping stories of adventures with the communist security services. I was from that moment a devoted fan, and we worked together (and I worked for her) for many years after.  Madeleine loved America with the fierce devotion of an immigrant-refugee who found in her adopted country a refuge both physical and spiritual, a place to call home when she had nowhere else to turn.

—Daniel Fried is the Weiser Family distinguished fellow at the Atlantic Council and former US ambassador to Poland.

‘A way of touching people before she even said a word’

She was the most inspiring role model as secretary of state in American history—especially, but not only, for women and girls. I had the privilege of traveling with her to several countries in the Middle East six years ago, where we met with a wide range of government officials, civil society groups, and students. When she would walk in a room, any room, whether it was filled with hundreds of people are only a few, you would see the exact same reaction: Everyone’s faces lit up instantly and almost burst with happiness. It didn’t matter whether they were foreign ministers or high school students, they all had the same expression—ebullient awe.

She had a way of touching people before she even said a word, of striking a chord deep within them because of her story, but also because of the story she was still writing so melodiously long after she left government service.

Not only was she one of the most effective secretaries of state in history, with gargantuan accomplishments, but she was the first, and only, secretary of state for the people.

She is a legend, and we will all miss her wisdom, grit, courage, and heart.

—Barry Pavel is senior vice president and director of the Scowcroft Center for Strategy and Security at the Atlantic Council and former top US Defense Department and National Security Council official.

‘All energy, all the time’

Secretary Albright epitomized all that is great about the American story: a World War II refugee from Czechoslovakia who used her powerful intellect and charismatic enthusiasm to rise the highest offices of US national security. She was a die-hard Democrat but in a robustly bipartisan way, effectively working with all who would support freedom and democracy and battle autocracy.

She was all energy, all the time, whether it was driving her students to excellence, campaigning for her presidential candidates, formulating and executing US national-security policies, or building and running a significant Washington firm noted for its selection of clients and initiatives that matched her worldview.

As we mourn the loss of her warmth, wisdom, vision, and hilarious wit, her legacy should inspire us to recognize the challenges to democracy we face today, the opportunities to expand peace and freedom around the world, and above all the need to act upon them.

—Ian Brzezinski is a senior fellow at the Atlantic Council’s Scowcroft Center for Strategy and Security and previously served as US deputy assistant secretary of defense for Europe and NATO policy.

‘For decades, she was the indispensable American’

I’m devastated. I had looked forward to many more dinners and discussions with Madeleine to go over not only past shared experiences but even more to chart the future. Her devotion to Europe and its security, to human rights and democracy, was important in making the United States a force for good. For decades, she was the indispensable American standing up for democracy and freedom.

—Carl Bildt is a co-chair of the European Council on Foreign Relations, member of the Atlantic Council’s International Advisory Board, and former prime minister of Sweden.

‘A person with no pretense’

It was a huge honor for me to have served with Madeleine Albright during her term as secretary of state. Apart from all the accolades that she receives as a remarkable secretary of state, she was a wonderful person. She was a person with no pretense. She always told it as it was! My most vivid memory was when I was confirmed as ambassador to the European Union (EU) just before the US-EU Summit in Germany. She did not know I had been confirmed. I showed up in Germany. She saw me and asked what I was doing there. I told her I was confirmed and she said, “Well, I better get you sworn in.” I went with her to her hotel room and she swore me in with zero ceremony on a Gideon Bible! That is who she was, and she was great!

—Richard L. Morningstar is the founding chairman of the Atlantic Council Global Energy Center and a former US ambassador to the EU.

‘A role model and an inspiration’

I’m so sad to hear that Madame Secretary, Madeleine Albright, has passed away. She was a role model and an inspiration for me and many women in foreign policy, always brilliant and passionate in a striking combination. I am grateful for the opportunities to chat with her at some occasions, most recently at the Munich Security Conference in February 2019.

—Anna Wieslander is the director for Northern Europe and head of the Northern Europe Office in Stockholm for the Atlantic Council’s Europe Center, as well as a former official in the Swedish Defense Ministry. 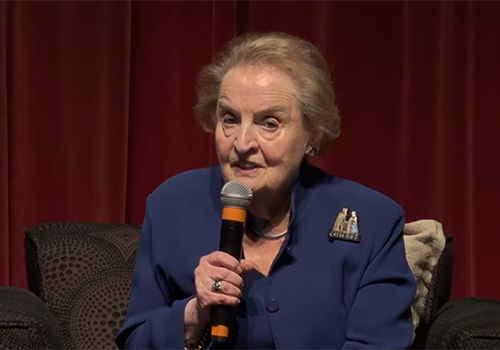 “The world is a mess,” Albright conceded. But to sort out the large problems we are facing, the way forward is to join together, she argued, not to continue to drift apart. 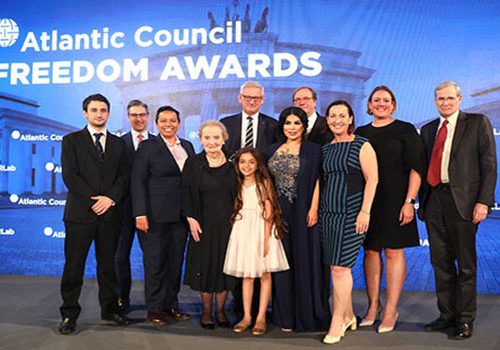 A warning from Madeleine Albright: Beware of “peddlers of hate” 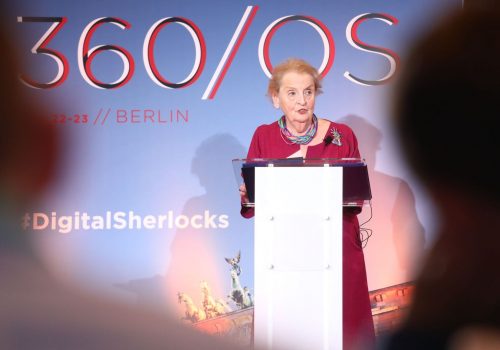 Image: “We need to learn more from countries on the frontlines…. [and] we need to move from talk to action,” said former US Secretary of State Madeleine Albright at the Atlantic Council's Disinfo Week on June 29. (Atlantic Council)