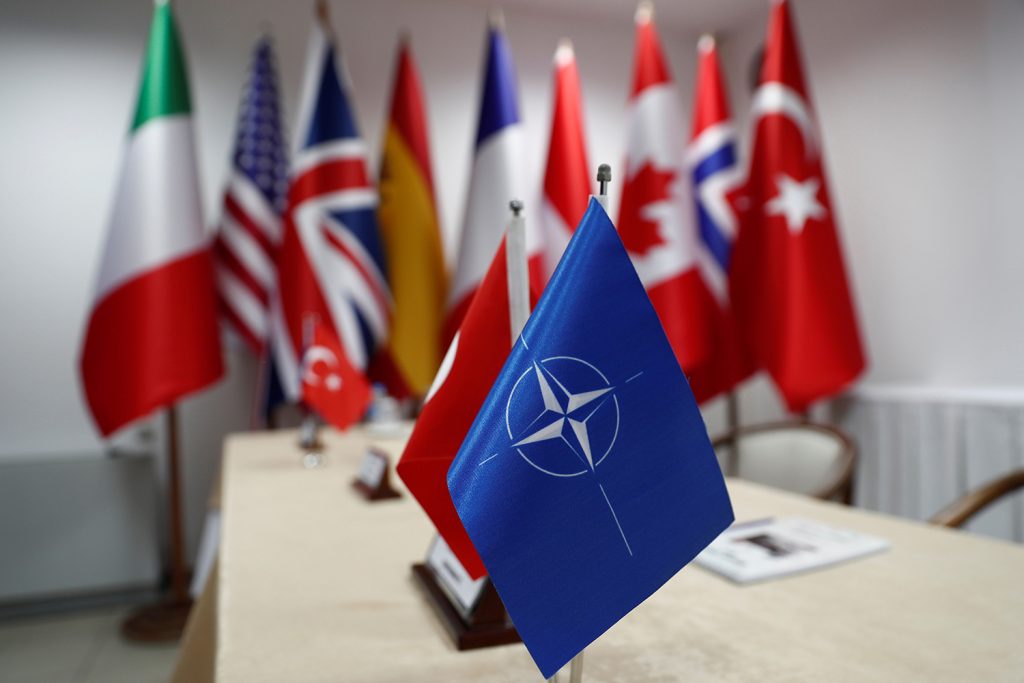 A NATO flag and the flags of participating countries are pictured during the Dynamic Monarch-17, a NATO-sponsored submarine escape and rescue exercise, at the Turkish Naval base of Aksaz, Turkey, September 20, 2017. Picture taken September 20, 2017. REUTERS/Murad Sezer

The coming US presidential election this November has put prognostications on the future of the transatlantic relationship into overdrive. The prospect of US President Donald J. Trump’s potential reelection, especially against the backdrop of a return to great power competition, has spurred dire questions about the relationship’s demise.

Most recent analyses on the future of transatlantic relations have usually focused on specific areas of policy—trade, defense, climate change, the digital economy—without considering relevant broader public and demographic trends. It is worth considering the state of the transatlantic relationship at a different level—beyond parties and personalities—to focus on Europeans and Americans themselves, who they are, and what they think.

Perhaps most obviously, demographics on both sides of the Atlantic look very different today than they did in 1945 or even 1989, and transatlantic politics has evolved in parallel. In the intervening decades, Europeans have struggled with demands for a more multicultural model for society and politics, stemming from complex colonial legacies and accompanying migration. More contemporary migration driven by conflict or economic hardship has also had significant socio-economic and political consequences for Europe. On the other side of the Atlantic, the United States continues to contend with its own long, dark history when it comes to race. The civil rights movement and significant migration from Central America are still respectively shaping the politics and demographics of the United States.

Unfortunately, however—as recognized by a young, progressive group of transatlantic experts—the dominant voices and faces driving transatlantic relations remain overwhelmingly white, despite the next generations on both continents being far more diverse. For most Americans of color, other parts of the world—not Europe—make up their primary frame of cultural reference outside the United States.

This development will greatly impact the future of transatlantic solidarity. Will Americans still view Europe as America’s partner of first choice or rather as just a land of old, white men? Would war-weary Americans support sending their military across the Atlantic to fight once again if a NATO ally is attacked? Likewise, after four particularly challenging years living with the Trump administration, would if Washington found itself in conflict with Iran or China?

The bottom line is that to ensure the future health and strength of the relationship for the next seventy years, the discourse and voices in the transatlantic space need to properly reflect the actual politics and demographics of Europe and the United States of today. This moment is a critical opportunity for both sides of the Atlantic to:

We have numerous shared challenges worthy of dialogue—take minority representation in public political life, for example. According to the European Network Against Racism, ethnic minorities compose just 4 percent of the current European Parliament, despite representing approximately 10 percent of the European Union’s population. Though the gap in representation in the United States is larger (14 percent), the 116th Congress is the most diverse ever, as 22 percent of members are people of color.

African Americans and Europeans of African origin are still struggling against the ongoing legacies of Europe and the United States respective “original sins”—colonialism and slavery. Perhaps shared efforts to counter excessive violence from law enforcement and a lack of educational or economic opportunity, and the common fight for equality, belonging, and against structural racism can all serve as a bridge. Likewise, many of those in Latino, Middle Eastern, and African communities on both sides of the Atlantic share incredibly difficult experiences of migration. They fled horrific violence or economic stagnation to make an uncertain trek for a better life, only to find the asylum out of reach and the prospect of “integration” deeply demoralizing. Building empathy and connection—solidarity—through shared experience and dialogue can create long-lasting bonds.

Education can play an important role in starting this conversation and building a more holistic understanding of Europe, the United States, and our transatlantic relations, both past and present.

Transatlantic relations is taught in American schools largely through the prism of conflicts—the American Revolution, the War of 1812, the Spanish-American War, and World Wars I and II. Europe is also still largely taught using the “dead, white men” canon, ignoring the complicated (and yes, often violent) history which made Europe home to peoples from across the world. The story of black people in Europe, in addition to other minority populations, before and during the 20th century is very often ignored. Classrooms in Europe and the United States need to ensure they teach transatlantic history beyond World War Two, including the European Union, and reconsider what content, voices, and narratives are used to teach both our common history and our current reality. Many such resources already exist, but simply need to be further mainstreamed, at the very least to reduce the 21 percent of Americans who have “no opinion” of the EU.

But action also needs to be taken now. There are some small initiatives out there worth flagging as a good start:

Governments, think tanks, universities, business, and civil society groups all need to do the work to provide the opportunities for these too-often marginalized groups to move from off stage to the main stage of transatlantic relations.

Tim Rivera is an affiliate of the Transatlantic Policy Center at American University and a LGBTI fellow at the Atlantic Council.

Despite a litany of high-profile disagreements between allies over the last few weeks, the NATO Leaders’ Meeting in London on December 4 “ended on a very positive note,” with a “pretty substantial declaration and agenda for the future,” according to Alexander Vershbow. The meeting, Vershbow observed, “went in like a lion and out like a lamb.”

The highest-ranking woman in Alliance history talks about the crisis in Syria and the success in encouraging gender balance throughout NATO.