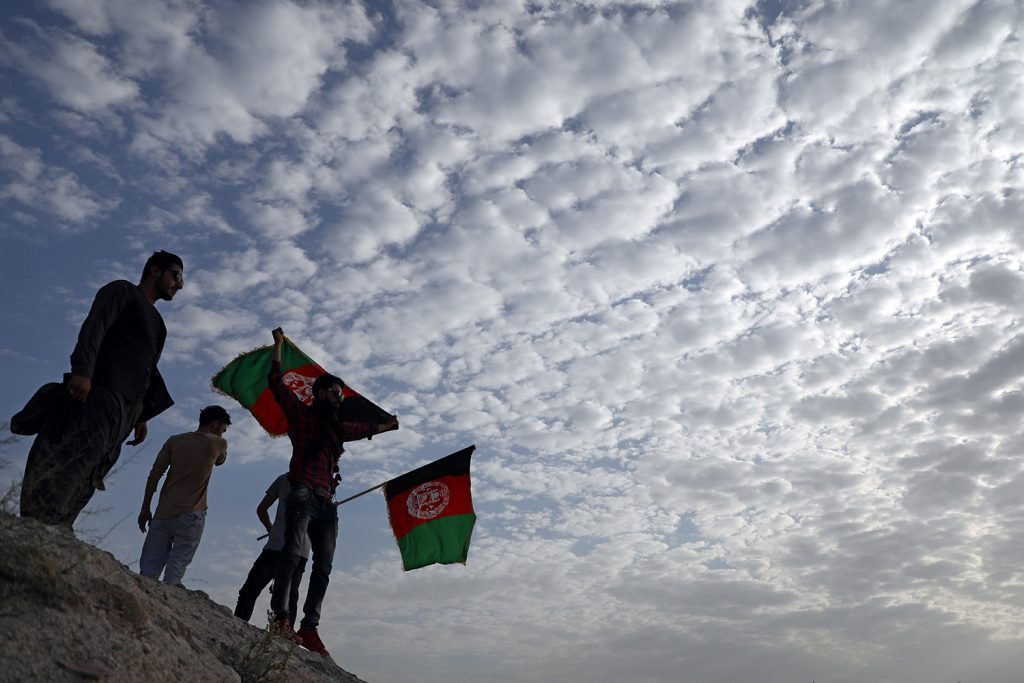 Among the most pressing issues on the US president-elect’s to-do list on foreign policy is the war in Afghanistan, which offers only hard choices. But despite the blunders of President Donald Trump, Afghanistan may actually now have a chance to achieve some form of political settlement and significantly reduced violence.

To pursue a path toward sustainable peace in Afghanistan, Joe Biden’s team must walk a fine line. On the one hand, they must make it clear that peace does not mean simply handing the country to the Taliban. It instead requires foreclosing a Taliban military victory. On the other hand, they and America’s partners must keep pressure on the Afghan government to negotiate seriously with the Taliban and not think of US military or financial support as license to refuse compromise.

And the Biden team must do all this while recognizing that successful negotiations, ones that will maintain constitutional government and human—including women’s—rights, will likely take a substantial period of time.

The effort to reach peace quickly in Afghanistan has led to numerous mistakes. The Trump administration repeatedly pushed the Afghan government to make concessions and fudged the United States’ own positions in order to overcome deadlocks. As a result, the Taliban has added demands, made no concessions, and told Afghan government negotiators that their only role is to negotiate the surrender of their government.

With patience and determination, the Biden team should push both sides to a sustainable agreement that ends this long war. Done well, this approach will bolster US security interests in Afghanistan and the wider region. Done badly, as it has been recently, it will leave terrorists entrenched in Afghanistan and consign Afghan men and women to a barbarous future.

At this very moment, in fact, the Taliban is seeking to take advantage of a declining security situation in the country—in which intellectuals, journalists, and civil-society leaders are being systematically murdered—and profound uncertainty among the Afghan public and elites about American policy.

The Biden team, which is likely to be preoccupied with urgent issues ranging from threats from Russia to the COVID-19 crisis to the ailing economy, needs to develop a short-term response that gives it time to consider longer-term options. If the new US administration were to announce a pause of all US troop withdrawals from Afghanistan until it determines whether the Taliban has lived up to its commitments, that would give it space to avoid losing before it even decides on its game plan.

The Biden team should give the Trump administration credit for creating conditions for peace. In his first year in office, although extremely skeptical of the US role in Afghanistan, Trump ultimately deferred to the advice of Defense Secretary James Mattis, National Security Advisor H.R. McMaster, and Chairman of the Joint Chiefs of Staff Joe Dunford. The result was a well-regarded, “conditions-based” South Asia strategy enunciated in August 2017. The strategy made clear that the United States retained a strategic stake in ensuring that Afghanistan would never again become a platform for terrorists to attack the US homeland. The approach involved maintaining military pressure on the Taliban insurgents by providing US support to advise and enable Afghan security forces and by intensifying diplomatic engagement in the region, particularly with the Taliban’s chief patron, Pakistan.

Ultimately, and as intended, this multifaceted approach created the conditions for direct US-Taliban negotiations in September 2018. Led by US envoy Zalmay Khalilzad, and his Taliban counterpart, Mullah Baradar, the talks yielded a February 29, 2020 agreement. While far from perfect, the historic agreement included four core elements: a commitment by the Taliban to prevent terrorist groups like al-Qaeda and ISIS-K from operating in Afghan territory; a timetable for the withdrawal of US forces by early 2021; the launch of peace talks between Afghan government officials and their Taliban counterparts; and a commitment to reducing violence, with the US and the Afghan government separately stressing the need for a ceasefire.

These significant diplomatic efforts, including the start of intra-Afghan talks in Doha, provided an unprecedented opportunity to end the conflict in Afghanistan while preserving core US security equities.

Lamentably, and against the advice of his top national-security advisers, Trump sought to advance his electoral prospects by announcing his plan to complete the withdrawal of US forces from Afghanistan by the end of 2020. The credibility of a conditions-based withdrawal was shattered. The president’s reckless tweets and ill-timed interventions undermined the fragile peace talks.  Additionally, Trump’s team pressed the Afghan government for unilateral concessions, including the release of Taliban prisoners who may be returning to the battlefield.

Trump’s signals emboldened the Taliban to intensify military operations, including targeted assassinations of officials, journalists and civil-society leaders.  Moreover, reports by the United Nations and statements by US officials, among other analysis, indicate that the Taliban has not met its commitments vis- à-vis al-Qaeda, as stipulated in the February 2020 agreement.

Fortunately, Biden, Secretary of State-designate Tony Blinken, Secretary of Defense-designate Lloyd Austin, and incoming National Security Advisor Jake Sullivan have ample experience with Afghanistan. They understand the value of ending the fight with an agreement that provides a good chance of sustainable peace and a workable means to prevent a resurgence of international terror operations emanating from Afghanistan.

The new administration should affirm its support of the ongoing Doha peace negotiations. It should pause further US troop withdrawals until it can conduct an expedited inter-agency policy review. The review should include consultations with NATO, the European Union, and other allies who have faithfully partnered with the United States in Afghanistan. It should include a re-examination of military drawdowns not only as part of a political strategy, but also as they relate to assuring that remaining US forces, diplomats, and other personnel are secure.

We believe that several near-term diplomatic steps will become evident.

In private talks with Taliban representatives in Doha, the new team should underscore that even after its policy review, the United States has no obligation under the February US-Taliban agreement to complete the full withdrawal of US forces from Afghanistan until there is tangible evidence that the Taliban is fully meeting its commitments regarding al-Qaeda and other terrorist organizations while also engaging seriously in peace negotiations.

The United States should make clear that the level of US forces in Afghanistan and other US diplomatic and financial support will be linked to the Taliban and the Afghan government taking credible steps toward a significant and measurable reduction in levels of violence, if not an outright ceasefire.

These points are likely to lead to tough exchanges with the Taliban.

Biden and senior officials in his administration should make the same points to Pakistani officials. The United States should be clear that positive bilateral relations, including the resumption of military-to-military ties, will only be possible insofar as Pakistani military, intelligence, and civilian officials demonstrably use their influence with the Taliban to mitigate violence and assure that the Taliban negotiates in good faith to reach a political settlement.

The new US team should convey an unmistakable message as well to Afghan President Ashraf Ghani and the broader political class in Kabul that there is no blank check from Washington: Sustained US financial and military support will be linked to them doubling down on finding a creative political solution that can end hostilities. Afghan leaders from government, the opposition and civil society in Kabul must overcome the divisions that have undermined the government’s ability to both negotiate effectively and achieve vital security and governance reforms.

An imperative for the Biden administration is to engage in serious strategic discussion with allies, partners, and other key actors (including China, Russia, and India) to rebuild trust and understanding after the Trump years. The same engagement is needed with Afghans. Distrust is rampant, and each side needs to find ways to understand the other.

The United States and its partners must do everything possible to kick-start peace talks in early 2021. Those talks should begin to address the real substantive issues that are essential for a post-conflict governing framework. All this will require patience. The reaction to every impasse must not be yielding to Taliban demands.

To facilitate the negotiations, the United States should seriously consider proposing that both sides agree to an acceptable independent third-country mediator. Such a setup would help the parties work through the very complex and divisive issues to be negotiated.

While the primary driver of US interests in Afghanistan and South and Central Asia is US security, the Biden administration should reassert the relevance of American values. The United States should reiterate its support for the basic tenets of Afghanistan’s liberal constitution, which has made possible impressive gains over the past twenty years in democratic governance, women’s empowerment, enabling rights of ethnic minorities , and freedom of the press and assembly. This is fully consistent with Biden’s strong support for America’s role in upholding democracy around the world.

It is important to recognize that a durable peace in Afghanistan will not be achievable unless a governance framework is in place to advance the rights of the population and create conditions for the achievement of social justice and sustainable economic growth.

Economic progress will depend on continued international support for Afghanistan, as the November 2020 Geneva donor conference made clear. The United States and its international partners should fully use the leverage of their vital economic and development support to influence Taliban and government behavior and performance.

For the new Biden team, the opportunity is clear: a determined, patient approach can yield a good outcome for US and Afghan interests. The size and cost of the US presence in Afghanistan have been vastly reduced, and the two sides are now talking. Skilled diplomacy, the effective use of assistance and military tools, and support from its partners can help guide Afghanistan to a peace that the vast majority of its citizens desire while reinforcing US security interests and America’s international standing.

James B. Cunningham served as ambassador to Afghanistan, Israel, and the United Nations as well as deputy ambassador in Kabul.

Hugo Llorens served as ambassador to Honduras, assistant chief of mission in Afghanistan, and special chargé d’affaires in Afghanistan.

Ronald E. Neumann served as ambassador to Algeria, Bahrain, and Afghanistan (to which he returns frequently) and is president of the American Academy of Diplomacy.

Richard Olson served as special representative for Afghanistan and Pakistan, ambassador to Pakistan, director for economic and assistance affairs in Kabul, and ambassador to the UAE.