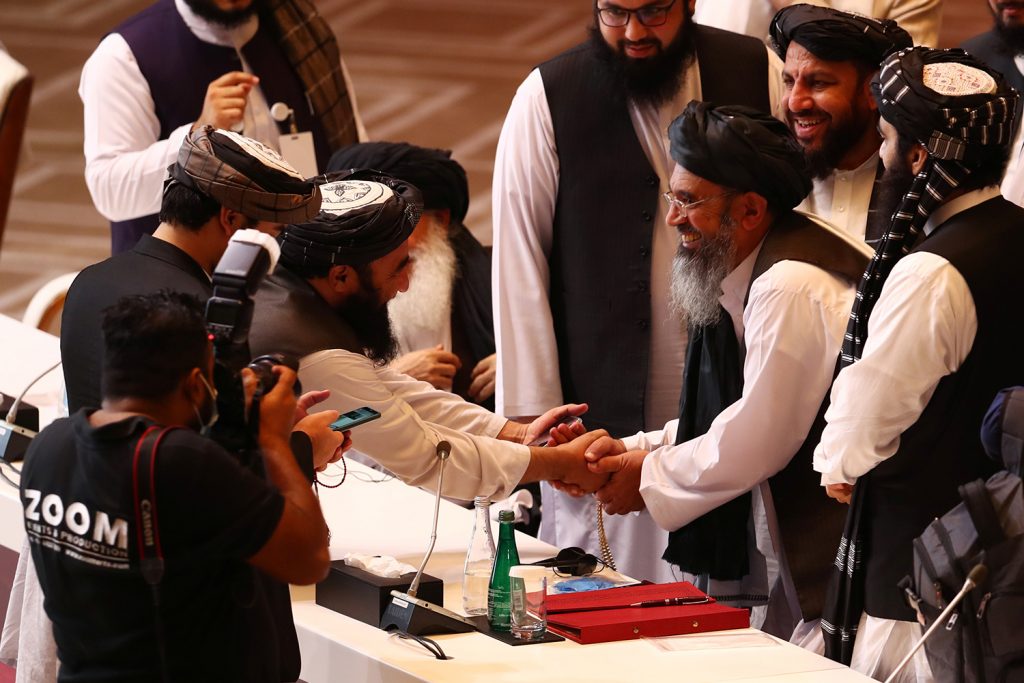 Again and again, the most contentious moments and breaking points in the intra-Afghan peace talks have revolved around the clash of two competing visions for an ideal Islamic polity in Afghanistan. The country’s government seeks to preserve the post-Bonn Agreement constitutional republic, while the Taliban envisions an emirate with absolute executive authority. But what continues to elude most observers—including, possibly, the negotiating teams themselves—is that the negotiations should just as much center on the question of whether we should ground political morality in a vision of a distinct Islamic polity (that of the Taliban or the Afghan government), or a non-ideal mode of Islamic governance reflecting the second-order and third-order preferences of the parties.

Conceiving of such a non-ideal polity requires assuming a perspective akin to the philosopher David Hume’s “judicious spectator” or the philosopher John Rawls’s “original position,” repurposed to the socially conservative texture of Islam. It must include a power-sharing design that can prove agreeable to both the Taliban and the Afghan government—enabling a guaranteed end to hostilities. The ask would therefore be for the parties to act from a position void of particular interests and preferences, save for one: the preservation of life above all else, or in other words an end to the war.

This position would accept the force with which each side professes its ideal mode of governance for Afghanistan. Neither side will wake up one day, minds changed, nor will either side simply disappear. A workable power-sharing format would therefore have to be a political arrangement on which these contradictory political forces can come to rest. It would have to be not a one-time codified arrangement to accommodate the other party, but an arrangement that will necessarily impact political life, law-making, adjudication, dispute resolution, and day-to-day administrative practice in a post-peace settlement Afghanistan.

This will require of both the Taliban and the Afghan government that they reorder their aims according to non-ideal approximations of their most-preferred objectives—according to their second- or third-order preferences. The necessity of deferring to the non-ideal follows from the observation that the prevailing political morality in Afghanistan, which infuses both the Afghan government’s vision of a republican polity and the Taliban’s vision of an emirate, is grounded in what philosophers might refer to as “emotivism.” How could it not be? Two decades of a bitterly fought, internecine conflict precedes this moment. Both sides have suffered, and continue to suffer, immense losses. But while this emotivism—shaped by loss, rage, and fear—is understandable, preferring that some mete out the rules by which everyone ought to live is self-defeating. If it were to make for any kind of peace, it would be a short-lived one.

It is impossible to resolve conflict by working from an emotivist (and thus non-rational, gut-level) premise, because in such circumstances reason is not part of the picture. Instead of dispassionately asking what serves the current moment best—like what will halt daily violence and end the war—the focus is on a clash of values.

In a November policy brief for the American University of Afghanistan, I attempted a preliminary deliberation on what a non-ideal, integrative model of governance in Afghanistan might look like. A viable agreement would enact a framework capable of regulating disagreement without suppressing, and thus exacerbating, it. Such a framework would not seek to eliminate disagreement or even scope for disagreement, but rather allow disagreement to play out in a productive and structured way. In a power-sharing arrangement, the two sides’ different political impulses, and the premises informing them, would beget separate sets of administrative practices and institutional expressions that would serve as arguments for each side’s normative vision. This follows because forfeiting the ideal in favor of the non-ideal would necessarily be temporary for both sides. The pursuit by both of their respective ideal polities would continue through the political process.

The resulting tension between the Afghan government and the Taliban would be pervasive, and the outcome would be arrangements featuring at least some ambiguities, leaving ample room for clashes over law-making, adjudication, and day-to-day administrative processes. Each side’s impulses would need to be held in check and addressed securely within the political realm through strong dispute-resolution mechanisms in a post-settlement Afghan governance system.

Given the differences between the two sides on the subject of dispute resolution, agreeing on an institutional formula for resolving disputes will be deeply contentious in itself. But this reality underscores a key point: Deferring to the non-ideal is not without great difficulty. What matters is which set of difficulties Afghans choose: those that are unproductive and will lead to a continuation of war, or those that are productive in that they end the war. By effectively shepherding points of contention away from the broader plane of peace talks and towards the more limited domain of dispute resolution—an area of concrete political and legal practice—disagreement can be relegated from an emotivist level to a more dispassionate one of technical-legal design. Accepting that tensions—challenging ones, but perhaps productive ones as well—will suffuse the framework of governance in a post-peace deal Afghanistan also makes a positive outcome likelier for the peace negotiations.

Of course, the wider regional context within which the Afghan war exists will impinge on the outcome of the intra-Afghan peace talks as well. The extent to which actors in Afghanistan seeking to spoil the negotiations see their interests threatened by a looming peace deal will also govern the pace with which the war eventually abates. So, along with calling for representatives of both negotiating teams to deal in a non-ideal universe of second- and third-order preferences, those working to end the war must also assess the incentives, compulsions, and fears driving the behaviors of foreign aggressors and domestic spoilers .

Both Iran and Pakistan have an idea of the kind of administration they would like to see in Kabul and pursue their objectives by manipulating levers of insecurity in Afghanistan or, more indirectly though no less corrosively, by co-opting local elites. Through a deeper understanding of the aims and anxieties that animate the preferences of these countries in regards to Afghanistan, we can more precisely forecast their behavior in response to different contingencies such as breakdowns in negotiations, periods of gridlock, surges of violence, and an approaching resolution. With this understanding, stakeholders would be able to not just anticipate, prevent, and minimize disruptions to the peace process, but also compose more effective strategies to influence events in Afghanistan. Moreover, an honest and compassionate mapping of the incentives and fears of would-be external aggressors and internal spoilers can inform how we go about locking them into more productive systems to bring security to Afghanistan and encourage economic and energy cooperation between Afghanistan and other nations.

The more detailed the profiling of potential aggressors, the more effective Afghan actors and our partners in the international community can be in deterring, inducing, and persuading these potential spoilers to shift their behavior. This will ensure that the next battery of policies and interventions in Afghanistan is more successful than previous ones, lending direction to more forward-looking frameworks for international cooperation with the country.

Muska Dastageer is an anti-corruption expert, a lecturer of peace and conflict resolution, political theory, and gender studies at the American University of Afghanistan (AUAF) in Kabul, Afghanistan, and an expert advisor on the Atlantic Council’s Strategic Dialogues on Afghanistan.

While the jihadi generation may be the ones who shape and sign a peace agreement with the Taliban, the youth bulge will have to implement and sustain it. They are the Afghans needed to achieve a common international aim: that nineteen one-year wars are not followed by nineteen one-year peace processes.

Preparing for the day after peace in Afghanistan

While a political settlement may end the conflict, sustaining peace will depend on a common definition of what peace will look like and delivering on the promise of a better future for the Afghan people.