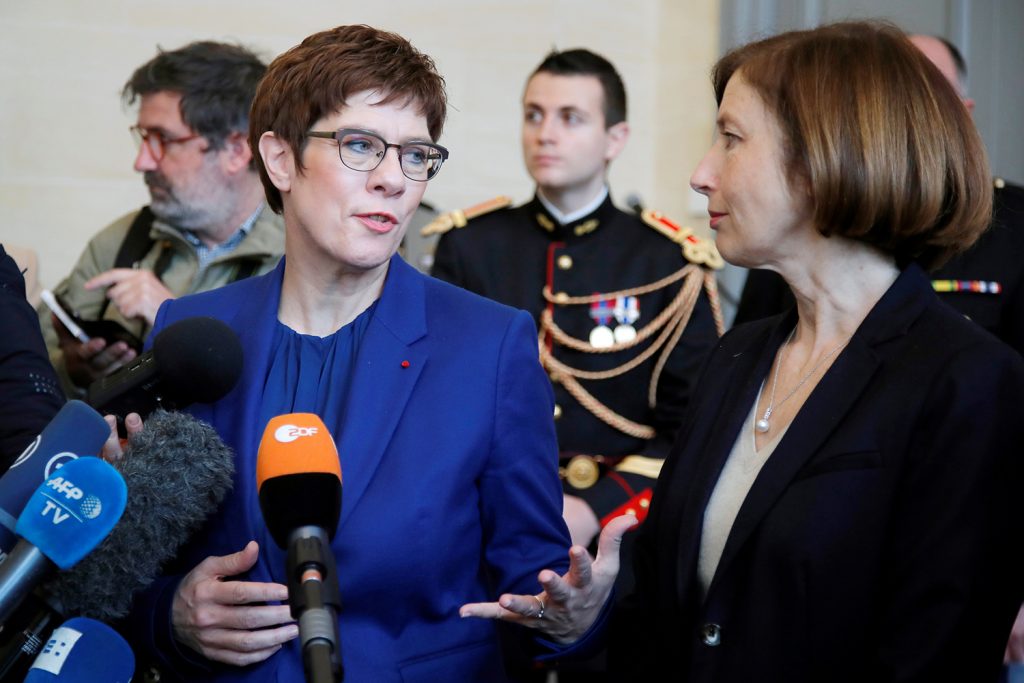 German presidency of the Council of the European Union (EU) comes at the end of a cycle in European defense, which started around 2016-2017 with the launch of a host of new initiatives such as the Permanent Structured Cooperation (PESCO). As the EU prepares to enter the 2021-2027 Multiannual Financial Framework (MFF), Germany’s challenge will be to tie the loose ends on defense and, building on the groundwork of the previous years, prepare for the future by asking hard questions about where Europe is going on this issue.

The role of the presidency of the Council of the EU should not be overstated. Its salience is not what it originally was given that the EU now has institutionalized leadership in the form of a politically-visible President of the European Commission and a President of the European Council (the European Council is the political body that gathers Heads of State or Government, the Council of the EU is the law-making body comprising the ministers of Member States—yes that is too many “Councils”).

However, the EU presidency still plays two key roles: brokering and agenda-setting. Except for the Foreign Affairs Council and its preparatory bodies, Germans will chair the various European committees for the next six months. As such, they will be responsible for building compromise among Member States, notably by “holding the pen” on all key texts, and for acting as brokers for negotiations with the Commission and the European Parliament. The presidency also provides opportunities for member states to draw attention to particular themes by putting them on the Council table or organizing conferences and events.

PESCO is finishing its first phase (2017-2021) and undergoing a strategic review, which will have to be completed before the launch of the second phase (2021-2025). Although PESCO has generated significant enthusiasm for European defense cooperation, the twenty commitments made under it have only been partially fulfilled and the projects are a mixed bag. Some have shown interesting potential (like TWISTER), three have reached Initial Operating Capability (IOC), and ten others should join them this year—though many are still progressing slowly. Finding ways to ensure better compliance with the commitments and sharpen the focus in project selection—or even to abandon non-performing projects—will be key.

Defense program seem under threat in the current 2021-2027 Multiannual Financial Framework budgetary negotiations—though there are some positive signs. The European Defence Fund might fare better as it dovetails well with an economic recovery plan supporting industry. Germany’s focus on military mobility might help salvage part of its funding though it is unlikely to match the Commission’s initial ambitions. The biggest risk, however, is that defense spending is set aside and left without a champion as member states battle over a massive coronavirus recovery plan and the size of the overall MFF itself.

On the operational side, the European Peace Facility (EPF), proposed in 2018, should also be launched before 2021, as it is tied to the MFF cycle. The EPF will allow the EU to support partner military forces either by funding their operations or by supplying them with military equipment. This fixes an important hole in the EU’s toolkit. For instance, its inability to equip the Central African Republic troops it had previous trained there, arguably, helped Russia expand its influence in the country. There are still many hurdles to be faced—the €10.5 billion initial budget proposal is seen as too high by many and the inclusion of weapons is controversial with some Member States—and German consensus building will be key.

Looking to the future by asking the hard questions

In past years, Europeans have built interesting new initiatives and institutions for defense cooperation, but now is the time to elevate the debate and think geopolitically. The current trend cannot be sustained if fundamental divergences in strategic perceptions remain unaddressed, if only because it will lead to a dispersion of efforts.

Germany’s proposal for a Strategic Compass, whose elaboration will span several presidencies, can help provide direction. If done right, it can provide a place for Member States to better understand the perspective of their fellow Europeans, to agree on threats and challenges, and help bring their strategic cultures closer. This is critical to avoid a European defense without direction.

However, to have a concrete impact, the Strategic Compass will have to avoid the pitfall of focusing on process rather than substance. This means not shying away from disagreements and addressing the hard questions. What threat do Russia or jihadist groups really pose? How do Europeans deal with China? How does the EU handle tensions with neighbors like Turkey? What type of burden sharing with the United States do Europeans want?

Finally, the German presidency will have to wrestle with transatlantic relations.

The first test will come in the form of the perennial debate about “third state” association to EU defense initiatives. Europeans have been debating for two years on how to best allow non-EU states and their companies to take part in the new projects. Member States were close to a compromise last fall on rules for PESCO and Germany could push it over the finish line. The proposal put on the table by the Finnish presidency of the EU—publicly supported by Germany, Spain, France, and Italy—provides most of the basics.

Regarding the European Defence Fund, time is running out to iron out the last disagreements. As the fund starts with the MFF in 2021, a compromise must be reached before the end of the year on the outstanding issue of article 5 (i.e. the status of associated states). Any revision to the agreed rules on intellectual property rights and export control, agreed upon in trilogue by the Commission, the Parliament, and the Council, are however unlikely. Reopening and closing such sensitive topics in a short timeframe would be a near-impossible feat. The transatlantic conversation here is better served by the practical case-study exchanges that the European Commission and the US administration have already began.

Aside from those specific issues, it will be up to Germany—for six months—to explain what Europeans are doing.

This will not be an easy task, especially in a US election cycle that will consume all attention. It will also require navigating the complexities of the European defense debate in Washington. Germany will have to engage the skeptics—who fear the EU is spending tremendous energy building paper tigers—and the critics—who are deeply wary of the EU wading in defense—while also speaking to the concerned friends—encouraging but worried about decoupling—and the industrialists—focused first on ensuring access for US defense products

The Finnish presidency was particularly adept at this, organizing frank workshops and conferences around visiting authorities—something Germany could replicate.

On many transatlantic issues, Germany might not like the American messenger, but it is a healthy discussion—if form and substance can be disentangled. The frank transatlantic debate can help Berlin face the long-overdue domestic debate about Germany’s role in the EU and the world.

In an era of rocky transatlantic relations, the presidency of the EU has a new role beyond brokering and agenda-setting: explaining. This is an important task to further mutual understanding on both side of the Atlantic and to ensure that Americans and Europeans remain synched up.

Germany’s role as President of the Council of the EU does not end in Cabo da Roca or Ireland—it also extends to Washington DC.

Berlin takes over the EU presidency: Lower your expectations