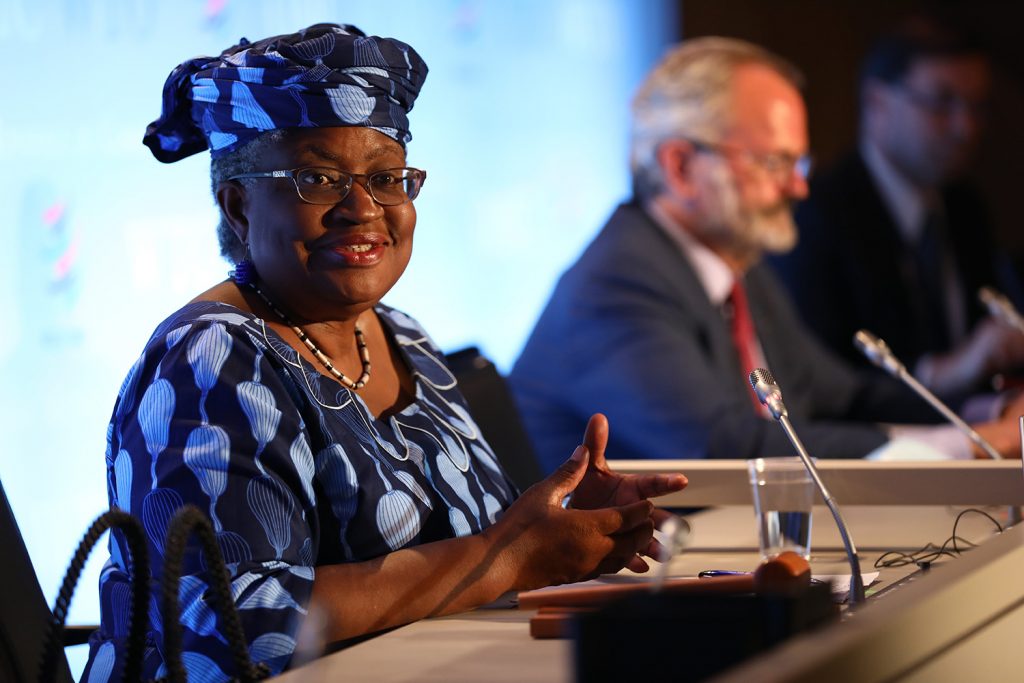 The United States has brought the selection process for the new director general (DG) of the World Trade Organization (WTO) to a halt after Washington blocked the nomination of Ngozi Okonjo-Iweala. Since the WTO’s inception, the DG has been chosen by consensus, meaning dissension by even one member (let alone the biggest member) can stop the process in its tracks. The US Trade Representative (USTR) office has said that it supports South Korean Trade Minister Yoo Myung-hee instead, as they argue she has the necessary trade negotiation and policy experiences to lead a major restructuring of the WTO.

In addition to believing that Ngozi lacks the same direct trade experience—although she was Nigeria’s finance minister and foreign minister—the US administration also is reportedly concerned about her internationalist views. Ngozi was a managing director at the World Bank working closely with Robert Zoellick, former World Bank President and USTR. In other words, the US opposition seems to center on Ngozi’s perceived support of a multilateral approach to world trade. The competing multilateral and national visions for the WTO and the global trading framework among members will need to be reconciled for the organization to be able to pick a new DG.

Under President Donald J. Trump, the United States has gone from simmering disappointment with the WTO to outright hostility. The United States has three key criticisms of the current organization: the failure to conduct another round of multilateral trade negotiations in the past two decades or so; the inability to enforce WTO rules especially on China for its industrial subsidies practices; and overreach by the Appellate Body leading to biased rulings against the United States.

The latest WTO ruling has reinforced the US disenchantment with the organization, as it found that the US 2018-19 tariffs on China are in violation of trade rules, having been taken unilaterally and not following agreed procedures, failed to substantiate claims of China’s unfair trade practices, and were applied selectively against China. This ruling, however, has confirmed for the United States its belief that the WTO is unable to respond to the systemic nature of China’s state subsidies, damaging other players in the trading system. Only resolute actions by the United States, Washington believes, can remedy the problem by getting China to agree to the bilateral “Phase One” trade deal. This agreement commits China to increase its imports from the United States by $200 billion over two years—so far the pace of purchases by China is about 53 percent of the prorated target. The United States has appealed the WTO latest ruling, which has effectively rendered it moot, as the Appellate Body has ceased to function due to the US refusal to agree to the appointment of members to the body.

US support for Yoo over Ngozi has also made the selection process even more difficult to resolve: Yoo’s candidacy has not been viewed favorably by countries such as China and Japan. Failures to reach consensus will lead to a lengthy consultation process, possibly ending in a compromise or a vote. In 1999, a lack of consensus after difficult consultations led WTO members to agree to a compromise where Mike Moore of New Zealand became DG for the first half of the six-year term (1999-2002) succeeded by Supachai Panitchpakdi of Thailand for the second half (2002-2005). Voting to select a DG is considered to be exceptional and a last resort, to be carried out according to a procedure agreed by members at the time. However, invoking the voting clause at present will only further incense the Trump administration and intensify its hostility to the WTO.

In practical terms, much will depend on the outcome of the November 3 elections in the United States. If Trump wins, the stalemate will likely continue with no clear end game in sight. If former US vice president Joe Biden wins, the United States will likely change its unilateral approach and focus on trying to reform the WTO, opening up the chances for a compromise. But this will have to wait until well after the inauguration date of January 20.

A razor’s edge between protection and protectionism

A central task for the next administration will be to create jobs and implement necessary protections for sensitive industries, while at the same time not trampling the free market principles that have made the United States the most powerful economy in the world.

Image: Lagos, Nigeria.- Ngozi Okonjo-Iweala was proposed on Wednesday (28) by the ambassadors who preside over the three main organs of the World Trade Organization (WTO) to lead the organization. After two rounds of consultations for the organization's highest position, only Okonjo-Iweala and South Korean Yoo were left out of the initial group of eight candidates, leaving the position for the first time in the hands of a woman. (via REUTERS)