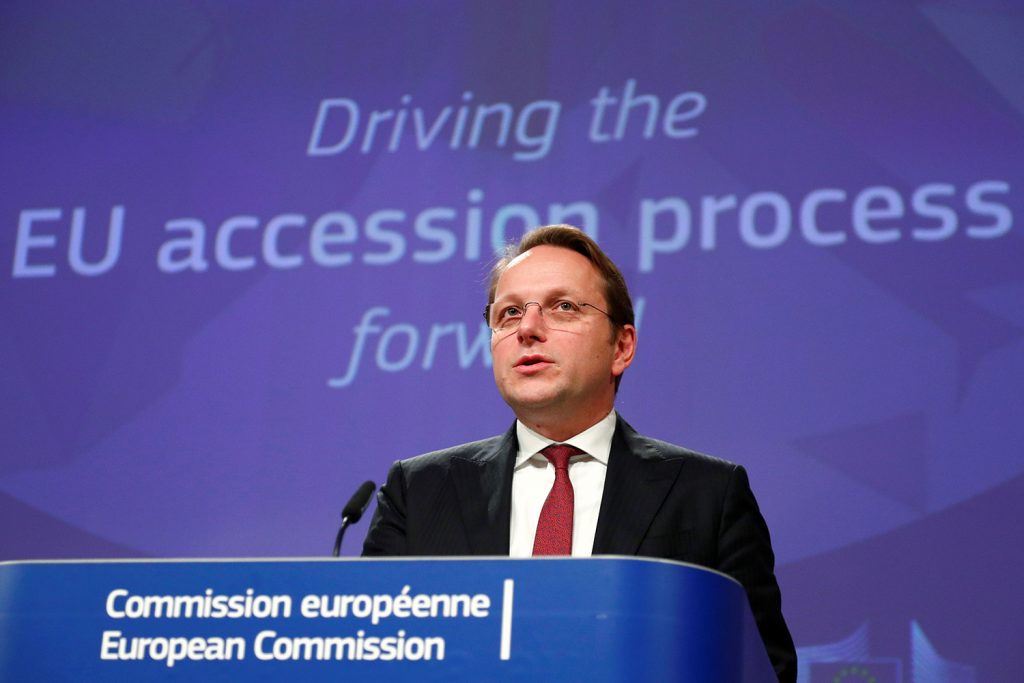 The European Commission announced a new proposal on February 5 for reforming the European Union’s enlargement process in hopes of overcoming opposition to the eventual membership of Western Balkans states.

Despite a recommendation from the European Commission and public assurances, North Macedonia and Albania were not offered a start of accession negotiations during an EU summit in October, mainly due to the concerns French President Emmanuel Macron had over the EU’s enlargement process and its ability to effectively prepare candidate countries for full EU membership. Macron subsequently released a reform proposal, which sought to allow the EU to reverse the enlargement process should candidate countries not make sufficient reform progress, as well as reorganize negotiations into seven stages and provide greater EU funding for candidate countries.

The European Commission’s new proposal calls for greater focus on “fundamental reforms” to the rule of law, fighting corruption, the economy, and properly functioning democratic institutions, stressing that “negotiations on the fundamentals will be opened first and closed last.” The new plan also includes an ability for the European Union to suspend negotiations with candidate countries, limit EU funding, or re-open previous completed negotiating stages in the case of stalled progress or backsliding, although the Commission argued that this ability needs to be coupled with “greater clarity on what the Union expects of enlargement countries at different stages of the process.”

Member states will also “be invited to contribute more systematically to the accession process,” which previously was under the almost exclusive purview of the Commission until the final vote for membership. To address Macron’s suggestion of implementing a new stages for negotiations, the Commission also proposed grouping the chapters of European Union law—the acquis—into “thematic clusters,” to simply the process.

The Commission’s proposals could help jumpstart the stalled progress of Albania and North Macedonia, who could receive an invitation to open negotiations at the EU Summit with Western Balkans countries in Croatia in May. The new requirements could also impact ongoing accession negotiations with Montenegro and Serbia, who have been in talks with the EU since 2012 and 2013, respectively.

Atlantic Council experts react to the European Commission’s proposal to reform the EU enlargement process and the potential impact it will have on Western Balkans accession:

“While it’s good news that the EU’s new revamped enlargement policy has finally been announced, its announcement does not change the dynamic on the ground in the Western Balkans in an appreciable way. The shock of the French blocking the opening of accession negotiations with Albania and North Macedonia came not from the delay—perpetual delays, after all, are to be expected by all applicants at this point—but rather from the way the decision was defended and explained.

“Emmanuel Macron wanted it to be made crystal clear that the accession process is not like a conveyor belt—the idea that once you get on, you will eventually become a full member. He insisted on explicit reversibility of the process, on mechanisms for pushing backsliding aspirants out rather than just freezing accession (as has been done with Turkey, and arguably Montenegro and Serbia too). And in several speeches, he strongly questioned the idea that the EU’s foreign policy in its periphery should automatically be one of expansion, signaling that alternatives to accession should be developed.

“Make no mistake: the new policy is in no way a “compromise” between France and other member states, but rather is a victory for Macron’s vision. The new accession process strategically dwells less on reversibility than the French non-paper floated after the Council vote halting accession. But it’s clearly there, as is vague language about aid and integration without full membership. And having had first-row seats to the blowback of Brexit, as well as to the political turmoil roiling the Union, leaders in the Western Balkans are not fooled as to what this all means.

“For a region whose politics, both domestic and foreign, have been shaped by the promise of EU membership in almost every way since the 1990s, the coming months and years will prove trying. But the reality is that this is probably for the best: Macron was right to point out the naked emperor. Meaningful progress can only happen when you face the world as it is.”

“The Commission’s proposal outlines a set of sensible, well-meaning, technocratic reforms for the EU’s enlargement process. The proposal’s focus on fundamental reforms as the centerpiece of the accession process is welcome, as is its emphasis on incentivizing reform by allowing piecemeal integration to specific EU policies and programs. Importantly, the plan also tries to give the EU the tools and leverage it needs to deal with stagnating reform processes and backsliding in the areas of democratic freedoms and the rule of law, which recent experiences have proven to be essential but nonexistent.

“However, the plan fails to address convincingly the elephant in the room—the sense of betrayal felt by Western Balkan governments and publics in the wake of France’s veto of accession talks for Albania and North Macedonia, and the resulting loss of faith in the European project. The Commission’s hands are to some extent tied—only the EU’s political leadership has the ability to heal those wounds, and opening negotiations with Albania and  North Macedonia is only the first step—but until the region believes the EU can be trusted and its doors are in fact open to them, the proposal will be worth little more than the paper on which it is written.”

“The European Commission’s proposal aims to respond to some of the concerns raised by France. It is far from clear, however, that the new methodology will make a real difference in terms of pushing reforms in candidate countries of the Western Balkans. Its aim appears to be more immediate—overcoming opposition to opening accession talks with North Macedonia and Albania. There are moderately positive signs coming from Paris, which suggests that the Commission could attain its objective.

“The methodology will probably impact on Serbia and Montenegro, both of which are currently in membership talks with Brussels. Their accession to the EU, which is in any event not likely in the coming years, will slow down, with the Commission and member stakes scrutinizing the rule of law in each of the countries more closely. How effective the methodology is will also depend on other fronts, inside the Union—e.g. the Commission’s standoff with Poland over the independence of the Polish judiciary and, in the medium and long term, the ideas to link the disbursement of EU funds to the state of democratic institutions and the rule of law in recipient countries. A more robust EU policy in those area will no doubt have knock-on effect on enlargement countries, too.”

“The Commission’s proposal is a welcome step in the right direction. It acknowledges that enlargement is a “geostrategic investment” for Europe. It also speaks to the French concern of too automatic a process—an issue which has been recognized by others such as Albanian Prime Minister Edi Rama.

“What the proposal gets right is that accession must be a political endeavor, one which is “not moving on autopilot” but rather “reflect(s) an active societal choice.” Increasing the frequency of political summits and giving member states a greater say throughout the process, including the ability to act on concerns, will help socialize the question of enlargement in public opinions.

“The balance between anticipated benefits and reversibility seems adequately struck. Candidate countries will be able to “phase-in” to individual EU policies and receive increased funding. At the same time, the EU will have the ability to re-open chapters, suspend funding, or pause anticipated access to EU programs in case of backsliding. Provided there is political will to act on reversibility, it would make the process more demanding. Yet, by front-loading the benefits, it also helps ensure continued political support in candidate countries.

“The clustering of existing chapters is less convincing. It will certainly help provide greater focus but preserves the underlying existing structure, a move likely based on the concern to avoid disrupting the ongoing accession of Serbia and Montenegro. As such, it does not really provide the basis for a gradual stage by stage approach that would have really made accession become a “slide” into in the EU.

“All considered, the proposal has many merits and stands a good chance of being supported by member states. It does not, however, solve the other issue on the table: the governance of an ever-larger European Union in a more geopolitical world. Streamlining the EU’s decision-making process need not be a precondition for opening accession talks. However, it must be sorted before accession takes place. This is why the Conference on the Future of Europe matters for the Western Balkans.”