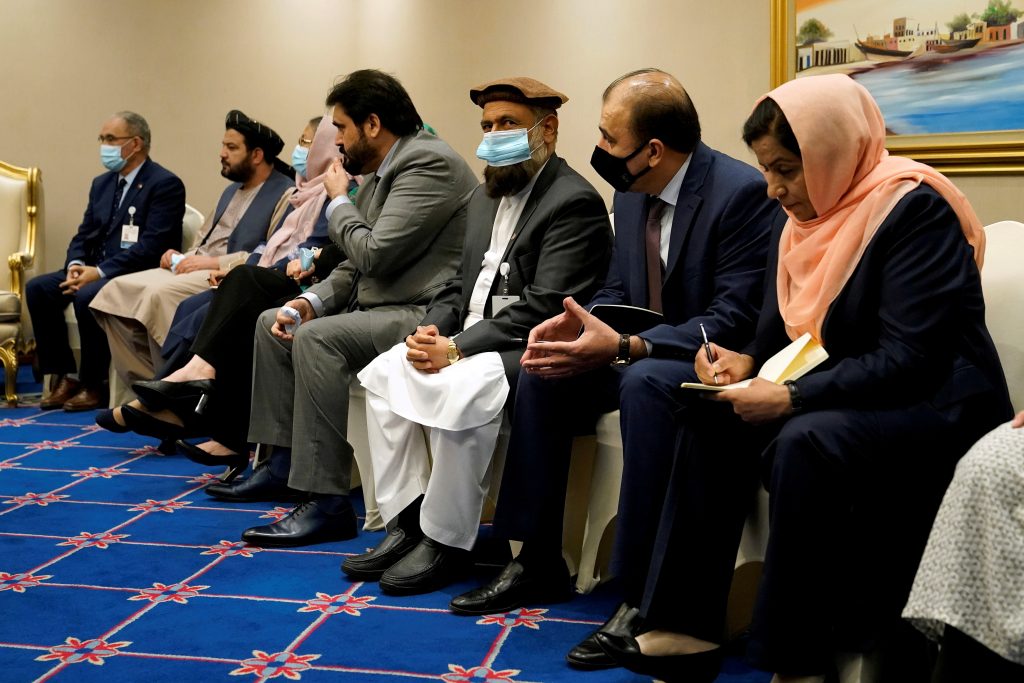 Now, twenty years after the initial intervention, Afghanistan has a democratic government, a constitution, and a vibrant civil society and media, all of which have been painstakingly built upon the sacrifices of our soldiers and civilians. Although things are far from perfect—the government, for example, is plagued with corruption that has been enabled in large part by our international partners—the challenges we still face do not negate how far we have come as a country.

Today, the United States has decided to leave. On its way out, it has negotiated an exit by signing a deal with the Taliban, a terrorist group still intertwined with the very same al-Qaeda whom the United States ostensibly came to our country to eradicate. The untenable position in which this decision has left the Afghan people began with former President Donald Trump’s seemingly promising “SouthAsia Strategy” which was intended to pressure the Taliban to join the negotiation table. Unfortunately, before any pressure could be effectively applied, the Washington sent an envoy, Zalmay Khalilzad, to meet with the Taliban. After months of shuttle diplomacy, Khalilzad and former Secretary of State Mike Pompeo unilaterally signed a peace agreement with the terrorist group.

This so-called “peace deal” would be more accurately dubbed a “withdrawal deal.” Its signing was followed by the release of 5,000 Taliban prisoners, more than 60 percent of whom promptly returned to the battlefield. It is worth noting that these prisoners had been held by the Afghan government, which was not a party to the agreement and had no say in the matter.

One year after the US-Taliban agreement was signed, the Biden administration has inherited an unstable relationship with the Taliban. There is widespread fear among American policymakers that time to withdraw is running out. Many are desperate to keep the deal alive despite the fact that the Taliban has not lived up to its commitments and has already threatened more bloodshed in Afghan cities if US forces do not leave by May 1st.

This American desperation has given the Taliban momentum and hope that they can revive their oppressive regime. It is easy to see why. The United States has placed shocking demands on the Afghan government, its partner for twenty years in the global war on terror. In March, US officials issued (and subsequently leaked to the media) a letter suggesting that the Afghan government should replace its constitutional system with a nine-page peace plan that, among other things, includes a shuraye fiqh (High Council for Islamic Jurisprudence) as part of the government. The shuraye fiqh is no different than the Taliban’s shuraye ahl waaqd which governs without any law or public input. Most worryingly, this “peace plan” gives the Taliban everything it wants without any pretense of negotiation, allowing them to become part of a “participatory government” (otherwise called an interim government) and putting them at a clear advantage for continuing to push a draconian constitution.

In their rush to find a quick exit, American decision makers seem to expect that the Afghan government will accept whatever settlement with the Taliban they put forward. We will not do this. Instead, we will fight for a peace that protects the rights of people to elect their leaders, upholds the constitution, and preserves and advances the achievements made in the past twenty years.

What do Afghans demand from the world before you leave Afghanistan?

First and foremost, we ask to be heard. We ask that you listen to the Afghan people, those who have suffered the most in this conflict. Listen to the Afghan youth, to Afghan women, and to the victims of the conflict who are the true representatives of what we stand to gain or lose at this juncture. Do not just listen to the foreign experts, many of whom have only visited our country for a few months at best. They are not the ones who have lived through the violence and lost family and friends to this war, nor are they the ones who have put their lives on the line to achieve the progress we have seen over the past twenty years.

We ask that when you leave, you do so without giving everything to the Taliban on your way out. Let this be a fair fight. Not in the battlefield, but at the negotiation table. A fair fight for the values for which we have fought for and which are now enshrined in the Afghan constitution. Let the Taliban face genuine representatives of the Afghan people, including the women and youth whose values are so removed from the medieval laws represented in the Taliban handbook of governance. Allowing the Taliban to simply attempt to force their rule on the Afghan people once again will draw fierce opposition, likely resulting in even more bloodshed.

We ask that you let the Afghan people, represented by their elected government, lead their own way in the peace process. There is consensus among Afghans that we want peace. However, reaching that goal might take longer than 18 months and will certainly take more than a few peace conferences. It may, in fact, take years and countless negotiations. This is a complex forty year conflict that has many external and internal drivers. Attempting to impose peace plans that have no popular by-in, arbitrary schedules, and external deadlines will result in failure and the inevitable “nineteen one-year peace processes” following the “nineteen one-year wars”.

We ask that you not turn a blind eye to the external drivers of this war. Pakistan’s involvement in the conflict has often been downplayed, or misinterpreted, with the country being looked at as a partner in the very war that it finances. Meaningful diplomatic pressure on Pakistan to stop their material support of terrorism has been invisible, if not absent. Today, Pakistan continues to provide refuge, military training, and military grade explosive material for bombs to terrorists, a fact that has been recognized by several Resolute Support Mission commanders, US Secretaries of State, and lawmakers. If the international community were to adhere to its principle of maintaining and promoting good conduct of states as well as to furthering peace and ending violence, the European Union and the United States would impose sanctions on Pakistan as a state sponsor of terrorism.

We ask that you be mindful of the toll this war is taking on Afghan civilians. The suffering of the Afghan people in this conflict surpasses the cost, however high that may be, that any country has paid in Afghanistan. Since the signing of the US-Taliban agreement, the Taliban has started killing Afghan members of civil society, media, clergy, and anyone who they foresee would stand against their draconian laws. These targeted killings and campaign of bombs and improvised explosive devices (IEDs) are taking too many lives.

Ejaz Ahmad Malikzada is a graduate of the American University of Afghanistan. He is a member of Afghanistan Green Trend, a youth-led grassroots social movement.

Image: Members of peace negotiation team of the Islamic Republic of Afghanistan attend a meeting with U.S. Secretary of State Mike Pompeo, amid talks between the Taliban and the Afghan government, in Doha, Qatar November 21, 2020. Patrick Semansky/Pool via REUTERS