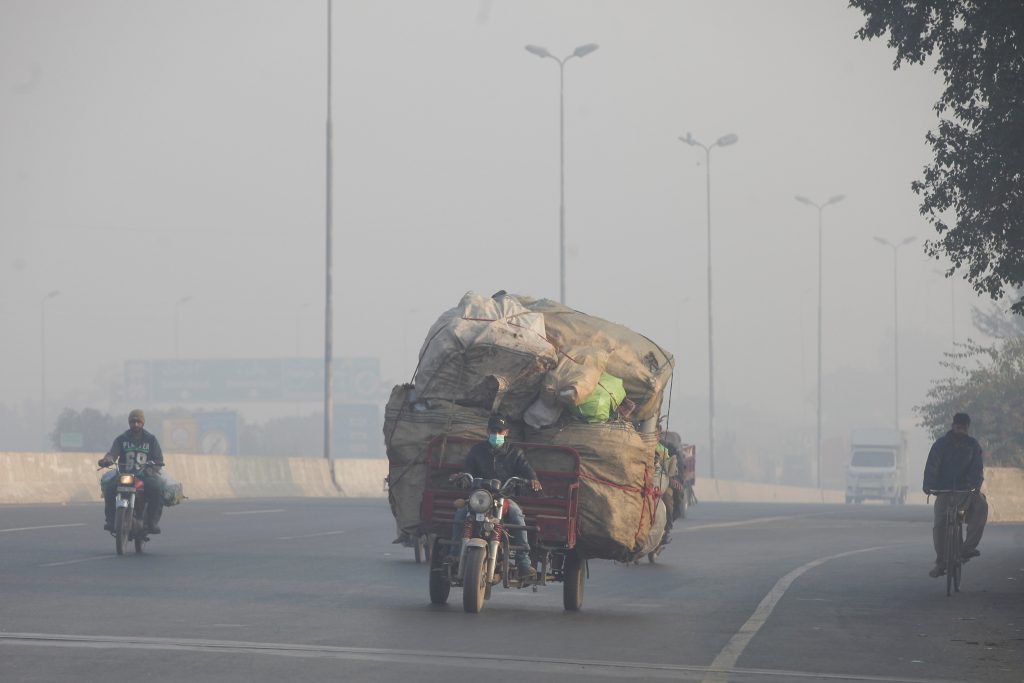 In late December 2017, I had just landed back in Lahore for holidays while studying abroad. I was returning from a city in Europe where the Air Quality Index rarely exceeded 50 US AQI, which is the Environmental Protection Agency’s index for reporting air quality. During this period I had become attuned to using public transport, on-foot travel, and regular jogging. Then, on my first attempt at doing a morning 5K run–and hoping to benefit from Lahore’s cool winter–I was left gasping for air less than half way through. My respiratory tract felt as if someone had lit a fuse inside, slowly burning over a wire, going all the way to my lungs. This was a shocking wake-up call: the air in Lahore was toxic.

As a student of public policy, and having worked with the public health bureaucracy in Punjab (of which Lahore is the capital), it wasn’t the first time that air quality issues were at the forefront. The Chief Justice of the Lahore High Court had only a month earlier ordered the creation of a “Smog Commission” after hearing a petition filed specifically on the increasing instances of poor air quality episodes. The issue was highlighted globally as well, with The New York Times drawing attention to Lahore’s toxic air. It was, though, the first time that I experienced the debilitating effects first hand.

In 2021, Lahore was dubbed “the second megacity with the worst air quality” – only second to New Delhi. But air quality is a country-wide, perennial problem in Pakistan, which as a whole has also been ranked as the second worst country in the world in terms of air quality. Other cities, including Karachi, Peshawar, Faisalabad, Multan, and the capital Islamabad are now witnessing “unhealthy” days as well. The problem had largely been overlooked until it was in our eyes (and lungs), literally. The story of how this happened is disputable, because one misfortune is that no long-term, consistent, and comparable datasets of air quality measurements are available. However, we are beginning to understand why this is happening today.

Pakistan, like other low middle-income countries, has poor environmental regulatory capacity. It also does not have a multisectoral, coherent understanding of environmental consequences of policy actions that have been taken in the past two decades. The most glaring of these have been poor fuel emission standards and an urban growth model which favors cars. Hence, it is not surprising that a report developed under the auspices of the FAO found that 43 percent of pollution is linked with the transport sector. This report is now widely quoted by Punjab government functionaries, although they remain unfocused on dealing with the crisis and have gone on to solely blame crop burning in India or brick kilns, rather than investing more in public transport and reducing the number of vehicles on roads.

The matter is further complicated due to the fact that petroleum standards are the domain of the federal energy ministry, not the provincial government. Nearly two-thirds of the diesel used in Pakistan is refined locally and outdated refining technologies means that very little of it conforms to the cleaner Euro-5 fuel emission standards. This explains the shockingly high contribution of the transport sector to air pollution in Punjab. The resulting emissions from fossil fuels do not escape into the upper atmosphere due “temperature inversion” in the winter months, resulting in cities looking like they are straight out of a dystopian novel. While the WHO’s new air quality guidelines recommend that Fine Particulate Matter (PM2.5) should not exceed 15 micrograms per cubic meter over a 24 hour period, on a typical December day in Lahore it averages between 300 to 400 micrograms per cubic meter – more than 20 times the health guidelines.

As things stand, we have been able to point at the elephant in the room, but the lack of air quality monitoring and local level apportionment studies still leaves a lot of evidence gaps needed to institute suitable policy interventions. Biomass burning–garbage in urban areas and crop stubble in rural areas–has not been fully studied as yet. Similarly, road dust, secondary aerosols, construction sector particulate, and thermal energy power-stations all make things even worse. Industrial lobbies are strongly entrenched in political circles and receive low regulatory oversight due to their perception as export earning breadwinners.

Residents of Lahore are now losing up to 5 years of their lives, according to the University of Chicago’s Energy Policy Institute (EPIC), because of the disease burden that impacts citizens. While Lahore’s Mughal-era twin Delhi receives much wider attention due to its air pollution crisis, the gravity of the situation is only now dawning on policymakers and researchers in Pakistan. Any dramatic transformations seem completely unlikely, and implementing long-term strategies today may yield reductions by the end of this decade. Pakistan’s air pollution may be the world’s greatest least known public health crisis today and it demands international attention.

Dawar Butt is a Lahore-based climate and environment researcher.

3 reasons why Pakistan should have attended the Democracy Summit

On Wednesday, December 8, journalist Kamran Yousaf broke the news that Pakistan was going to “skip the US summit on democracy.” There are three key reasons for why this decision is a mistake.

Issues and mistrust in US-Pakistan relations

The August 2021 withdrawal of the United States from Afghanistan has yet again exposed the fragility of Pakistan-US relations. Over the growing—and allegedly dubious—role of Pakistan in its commitment to the War on Terror, increasing concerns are being expressed in the United States about the nature of its relations with Islamabad.