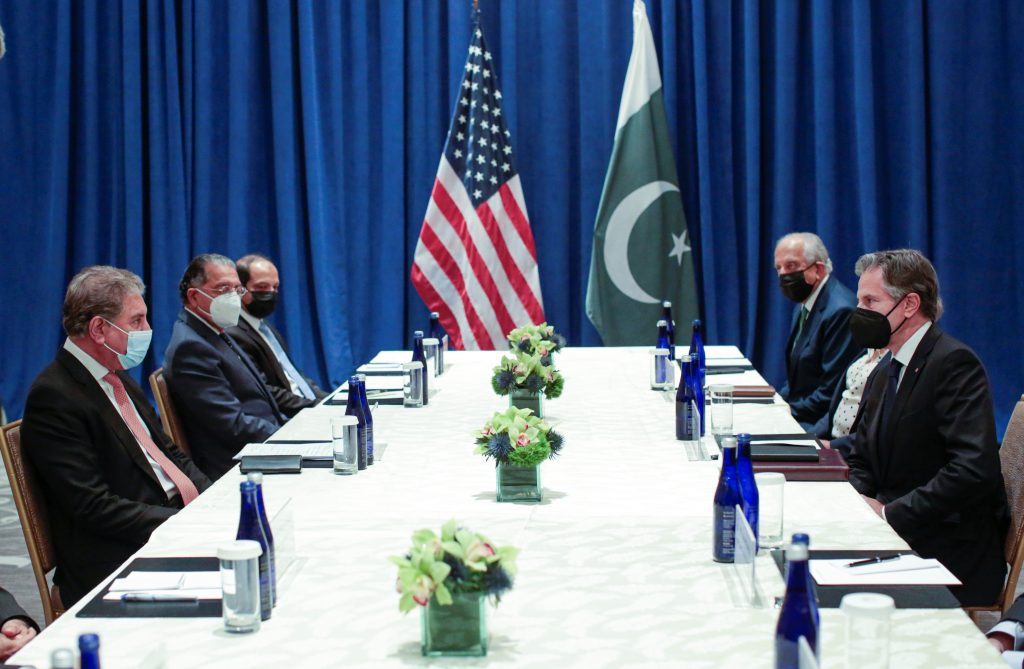 The August 2021 withdrawal of the United States from Afghanistan has yet again exposed the fragility of Pakistan-US relations. Over the growing—and allegedly dubious—role of Pakistan in its commitment to the War on Terror, increasing concerns are being expressed in the United States about the nature of its relations with Islamabad. Though some US officials still think that Pakistan has played its role and Washington needs to continue engaging the country, some officials want Washington to revisit its terms of engagement with Islamabad. It was in this context that, when asked by lawmakers if it was time for Washington to reassess its relationship with Pakistan, US Secretary of State Antony Blinken had to assure Congress that “this is one of the things we’re going to be looking at in the days, and weeks ahead – the role that Pakistan has played over the last 20 years but also the role we would want to see it play in the coming years and what it will take for it to do that.”

The statement was issued by Secretary Blinken at a time when Pakistan has been demanding that its role and “sacrifices” made in fighting terrorism should be acknowledged by the international community, and the United States in particular. Pakistan has been demanding that rather than taking the country solely along for fighting ad hoc battles against threats and terrorists, Washington should give Pakistan equal status as an ally and a sovereign nation like it gives others. Prime Minister Imran Khan said in an interview in June 2021 that the relationship between the United States and Pakistan was “lopsided” and that “because the US felt that they were giving aid to Pakistan, they felt that Pakistan then had to do US’ bidding.” Foreign Minister Shah Mahmood Qureshi had told his US counterpart in May 2021 that Pakistan wanted to have better ties based on “close economic cooperation, enhanced regional connectivity and common vision for a peaceful South Asia.” Given this new approach of Islamabad in which the leaders of the country demand that  the United States should treat Pakistan as an equal partner, this statement by the US secretary of state was bound to invoke an angry reaction from Pakistani officials, civil society and political commentators. Thus, the government of Pakistan said that the statement by Blinken was “not in line with the close cooperation” between the two countries.

Ties between the two countries have had an on-and-off trajectory. Right from the beginning in the 1950s, they have been established on ad hoc bases as transactional ties in which the United States has been guaranteed security and succor in exchange of money by Pakistan. Once the security threats vanish, the relationship returns to a position where they hardly share a common interest that would bind them to cooperate.

Historically, interests between the United States and Pakistan have hardly converged, and in fact diverged most of the time. They even interpret issues and matters differently. While it is a fact that Pakistan joined hands with the United States in the War on Terror in Afghanistan, becoming a frontline ally—which it keeps reiterating—it never did so by choice. Pakistan’s decision to join the war was because of the coercive diplomacy of the United States and Islamabad’s apprehensions that if it refused, Washington might promote India’s role and increase its presence in Afghanistan, undermining Pakistan’s concerns.

Given these compulsive factors for the security of the country, Pakistan came up with a strategy to make money out of its cooperation with the United States. As this cooperation needed Pakistan’s security establishment more than its civilian leadership, most of the talks and deals were related to security, putting GHQ in command. In this way, yet again Pakistan was able to practice what C. Christian Fair wrote rather irritably a few years ago, “Pakistan has been extremely solicitous, in an effort to monetize its various sources of relevance.” However, Pakistan has been claiming it never received appreciation for its role in the War in Terror and that the costs of participation in the war incurred on it were huge and irreparable. There is thus a clash of narratives between Washington and Islamabad on the issue.

Frustrated over the intractability of the Afghan mess and unable to decide when to pull out of the country, President Donald J. Trump disparaged against Pakistan, saying that “we have been paying Pakistan billions and billions of dollars at the same time they are housing the very terrorists that we are fighting.” In reaction to this, the foreign minister of Pakistan reminded the US president that “no billions of dollars were dished out to us.” The money given by Washington to Islamabad was rather a payment for the services provided by Pakistan to the US and its allies in Afghanistan.

Washington is not alone in accusing Pakistan of hosting the Taliban and other terrorists, thus subverting the efforts of the US-led coalition and republic in Afghanistan. The government of Afghanistan had time and again accused Pakistan of being hand in glove with the Taliban and undermining the war against the latter. Repeating the words of then-President Ashraf Ghani, Dawa Khan Menapal, director of Afghanistan’s Government Media and Information Center, told Voice of America (VOA) in May 2021 that “we all believe that the terrorists have bases and support in Pakistan.”

The United States demands that Pakistan “take decisive and irreversible action against these groups,” despite having taken “some action against externally-focused militant groups and UN-designated terrorist organizations operating from its territory.” The statement has been issued time and again by Washington, given its struggle to fight the Taliban and lately other terrorist groups in Afghanistan and in the “Af-Pak” region. In response, Pakistan has been claiming to have done more than they could but still it is not acknowledged by the United States. Prime Minister Imran Khan said in Pakistan’s National Assembly that “when we gave so many services, did they [United States] praise us or acknowledge our sacrifices?” He also highlighted the “idiocy” of join somebody else’s war. But Khan has still not come up with a clear statement wherein he would have shunned Islamabad’s support or cut the ties with the United States. The prime minister seems to be aiming to renegotiate the terms of engagement with Washington, not cut off ties entirely.

If it is presumed that what Pakistan has been saying stands true, that Islamabad’s decision to join the War on Terror incurred huge human and financial losses on the country, why has the demand for Coalition Support Funds (CSF) been raised by Pakistan time and again whenever it was stopped or delayed? Why did Pakistan resume supporting the United States and its allies when it stopped doing the same for some time in the wake of the Salala incident of November 2011? Apparently, the main concern of Pakistan was to get funds from the United States while monetizing the other losses in its relationship with Washington. Never has it refused to take funds from the United States. The aid of over $8 billion from the United States has been adroitly used without denting Pakistan’s strategic interests, which includes a resurgent Taliban. The assistance has also not benefitted some areas of Pakistan such as Khyber-Pakhtunkhwa.

One reason for not cutting ties with the United States and disengaging from the War on Terror has been that the funds from Washington have been useful for the Pakistan military to modernize and procure military weapons. The same would have been a difficult task, given the abysmal condition of the country’s economy. As Akbar Zaidi has argued, aid from the United States has gone to the Pakistan military, strengthening its hold on the country’s political economy. Also, the imagery used by the army to highlight its sacrifices in fighting terrorism has improved its legitimacy within the country.

The “lopsided” relationship between the United States and Pakistan exists because the two countries hardly share any strategic or economic interests. The relationship was driven by ad hoc security concerns, with both countries needing each other. Washington needed Pakistan to assure its defense against the Soviets in the 1980s and eliminating Osama Bin Laden/al-Qaeda in the 2000s; for Pakistan, these apparently unwelcome circumstances created an opportunity to make its relevance felt and monetize them. It has done so artfully, increasing security concerns for Washington by shoring up the Taliban and the Haqqani Network and extending their bases in Pakistan’s territory. The policy had serious adverse effects for Pakistan as well, as the Tehreek-i-Taliban Pakistan (TTP) and other terror outfits have been using the same areas to hide and prepare attacks on Pakistan. As such, the fencing along the Afghanistan-Pakistan border, completed in June 2021, will not serve its purpose until used selectively. It would be hard to differentiate between the Afghan Taliban and Pakistan Taliban when they cross the border.

It remains relevant to mention that there might be minor differences on the issue between Pakistan’s civilian leadership and the military. While the civilian leadership may be concerned about overall economic damage and human costs of the game, for the military’s strategic interests, it may not cause much worry in its calculations of costs and benefits.

For the United States, it has been caught in the convoluted thinking of the Pakistani military’s strategic calculations of its policy vis-à-vis the larger issue of securing its interests in Afghanistan. Given the deep involvement of Islamabad/GHQ in Afghanistan, it would never have been an easy decision for the United States to entirely abandon or fully engage Pakistan and its policy in the region.

Dr Nazir Ahmad Mir has a PhD in Peace and Conflict Studies from the Jamia Milia Islamia University in New Delhi, India and is a close observer of South Asia’s foreign policy.

Though discussions abound about how South and Central Asia might align to prevent a humanitarian catastrophe in Afghanistan, the ramifications of the Taliban takeover will also play out in the domestic affairs of Kabul’s neighbors. Looking at the evolving relationship between Afghanistan and Pakistan, questions remain as to how Pakistani politics and society will change amid the cessation of conflict but new Taliban regime next door.

On August 18, Ajmal Ahmadi, the former governor of Afghanistan’s Central Bank, tweeted about the bank’s balance sheet, citing that all DAB assets are safeguarded in the US Federal Reserve, the World Bank, and the Bank of International Settlements in the form of US Treasury bills, bonds, gold and cash–a total of $9.6 billion that, just one day before the collapse, the US government had frozen and banned from all financial transactions.