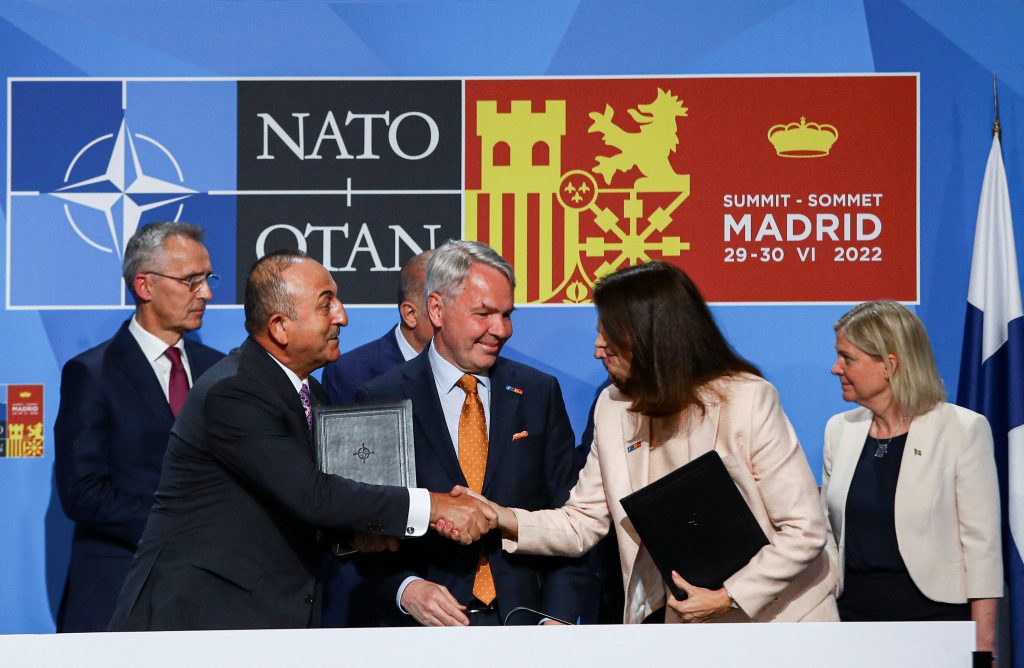 NATO Moves to Expand. NATO leaders, meeting at a summit in Madrid, formally agreed to invite Finland and Sweden to join the Alliance, paving the way for the admission of NATO’s newest members since 2020. The move came after Turkish president Recep Tayyip Erdogan dropped his objections to the accession process when the two Nordic nations agreed to take certain actions to restrict terrorist groups, including PKK, a Kurdish pro-independence group against which the Turkish government has sought to clamp down.

EU Aligns on Ukraine. On a historic visit to Kyiv, the leaders of France, Germany, and Italy stood together with Ukrainian president Volodymyr Zelenskyy as they pledged to bolster assistance for Ukraine and announced their support for Ukraine’s bid to become a member of the European Union. The EU followed by granting the country “candidate status,” marking the beginning of what could potentially be a years-long process for accession. The European leaders later joined President Biden and other G7 partners for a summit in Germany at which they agreed to strengthen penalties against Russia, including banning Russian gold, cracking down on the Kremlin’s efforts to evade sanctions, and considering a price cap on Russian oil.

BRICS Stand with Putin. Vladimir Putin joined the leaders of China, India, Brazil and South Africa at a virtual BRICS summit meeting organized by Chinese president Xi Jinping, giving Putin his most high-profile international engagement since Russia’s February invasion of Ukraine. Putin used the occasion to cite the “deepening cooperation” among BRICS members, as the five leaders signed a “Beijing Declaration” pledging to work together on supply chain resilience and digital trade. Iran and Argentina reportedly submitted applications to join the BRICS as well.

“At a time when the world is threatened by division and shocks, we, the G7, stand united. We underscore our resolve to, together with partners, jointly defend universal human rights and democratic values, the rules-based multilateral order, and the resilience of our democratic societies.”