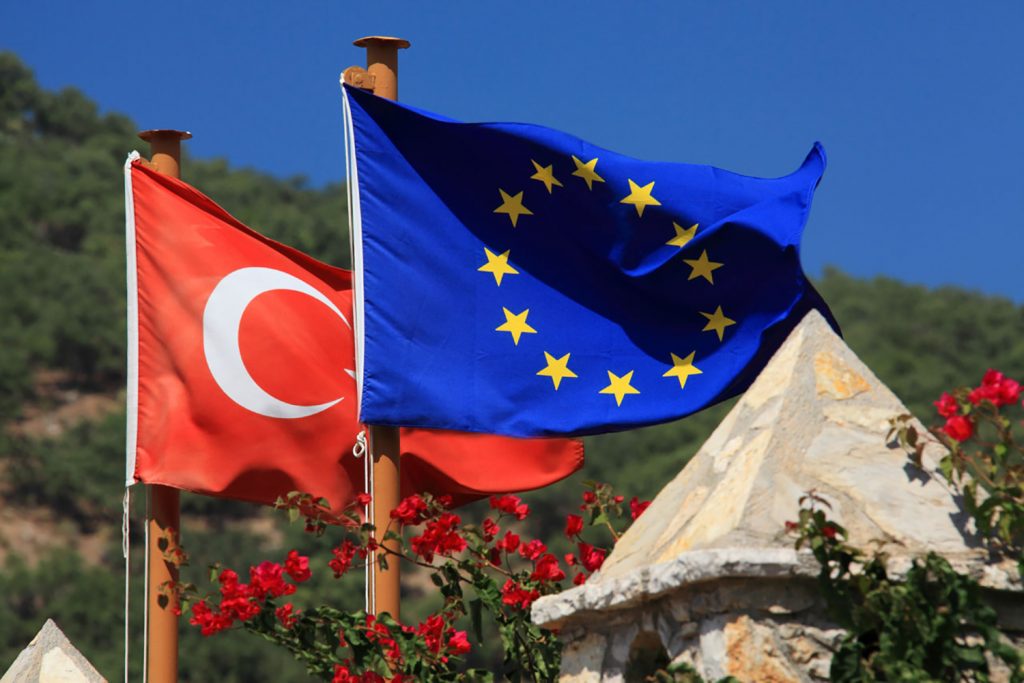 Editor’s note: This op-ed is in response to an op-ed for the Atlantic Council by Nathalie Loiseau, a member of the European Parliament from France. Read her article here.

There is little doubt left that France and Greece are trying to drag the European Union and even the United States into their efforts to salvage their faulty policies in the Eastern Mediterranean region. These policies, which flew in the face of Turkish interests, were destined to fail from the beginning. As Paris and Athens blame Turkey for these developments, they also tarnish the legacy of the wise European leaders whose keen sense of geostrategy helped put Turkey on the road to EU membership in the first place.

Locked in an echo chamber without Turkey’s voice, some European leaders have jumped on the bandwagon of criticizing Turkey. But others must be watching in bewilderment. The reckless rhetoric against Turkey involves manipulating facts, concocting disinformation, and even bullying, which may all be signs of the times we are living in but are deplorable tactics nonetheless. This recklessness has only aggravated existing challenges in very uncertain times, emboldened NATO’s enemies, and damaged the prospects for cooperation with Turkey, which any sensible analyst should conclude is necessary for regional stability.

I cannot change these leaders’ undecipherable decision to play foul, but I would nonetheless like to set the record straight on the many issues currently dividing the EU and Turkey.

Turkey sought to bring Syria into the wider European economic system even before the Arab uprisings. But in 2011 the Syrian regime went in the opposite direction and decimated the country instead. As UN, European, and US efforts to end the conflict fell into disarray, Russia stepped into the void. In 2016, Turkey put boots on the ground to eradicate DAESH (ISIS) across our border. Had we not cleared the terrorist group, DAESH would not have been defeated by simple aerial attacks and proxy units. After defeating DAESH elements, we cleared another stretch of our border, this time from the Kurdistan Workers’ Party (PKK)/People’s Protection Units (YPG) terrorists who cooperated with the United States and France in a bid to break up Syria.

Turkey hosts more Syrian refugees than any other country in the world, and European pledges to support Syrians in Turkey—which were made when it was already too little too late—have not been fully fulfilled. Some respect for Turkey’s actions to help these refugees is in order.

The legitimate government of Libya recognized by the United Nations is currently led by Fayez al-Sarraj. General Khalifa Haftar—a warlord who has enjoyed material and political support from not only the United Arab Emirates and Egypt (not by any stretch of the imagination members of the democratic world), but also France, Greece, and Russia—wants to forcefully overthrow the legitimate government. So those who support Haftar are effectively endorsing a military coup in Libya. Continuing to support Haftar means driving the country toward fragmentation. Turkey objects to both this fragmentation and a military coup.

Moreover, Turkey’s support for the Sarraj government prevented a potential disaster in Tripoli as Haftar’s army approached. As a top European official told the Financial Times: “Let’s be honest, Turkey stopped the fall of Tripoli. Without their intervention, it would have been a humanitarian disaster.”

French authorities allege Turkish wrongdoing in an incident involving Turkish and French naval units. NATO investigated the matter and didn’t confirm the French version of events. As a result, France pulled out of NATO’s Operation Sea Guardian in exasperation. Together with Greece, France now wants to fashion the EU’s Irini naval operation, intended to enforce an arms embargo on Libya, into a scheme where only Haftar is able to receive arms supplies. The discovery of mass graves left behind by Haftar’s forces in Tarhuna should add another layer of shame to France’s policy.

Greece maintains the position that a tiny island of ten square kilometers, which is two kilometers away from the Turkish mainland and 580 kilometers away from the Greek mainland, can block Turkey’s access to the sea by requiring a 40,000-square kilometer continental-shelf zone around it as Greece’s exclusive maritime space. Athens did not make a similar outrageous claim vis-a-vis Italy in a recent delimitation agreement between those two countries.

Greek Cypriots have already been violating the rights of Turkish Cypriots and getting away with it. Now Greek Cypriots object to proposed Turkish Cypriot arrangements to share benefits from newly discovered hydrocarbons in the Eastern Mediterranean, and grant illegal licenses beyond their territorial waters to French and other companies. France has hopped enthusiastically into the issue by trying to fashion EU sanctions against Turkey, in a forum where Turkey is not present to defend itself. The EU can choose to continue to push Turkey further away from its orbit through sheer recklessness and greed, but Turkey will not be pushed around.

A UN-proposed and EU-supported peace plan for Cyprus was rejected by Greek Cypriots in 2004. But despite this Cyprus was allowed into the European Union, in violation of international law and due to Greek blackmail, as Athens threatened to veto the nine other accession countries if Cyprus was not let in.

European officials seem to expect that Turkey will shelter refugees fleeing violence forever, with EU countries picking and choosing who and how many they will accept as refugees even as those countries demean Turkey. That is a raw deal and is not sustainable. Turkey hosts the most refugees of any country in the world. Last year, as we tried to stop the bloodshed in Idlib, Syria we declared that Turkey couldn’t take any more refugees and discouraged them from moving further west. Rather than sympathizing with our position and supporting us, the EU has only offered criticism. All this even as Greece committed organized cruelty against migrants, which was deemed “unacceptable” by the International Federation of Red Cross and Red Crescent president. Some countries that often boast about their human-rights record lined up behind Greece. We really find it hard to understand how others can expect us to shoulder all of the burden even as they do nothing to help stabilize the situation in Europe’s neighborhood.

The transatlantic link is vital for European security. NATO is indispensable. Experience with the EU’s approach to some critical issues in its immediate neighborhood gives us no hope that it would be a reliable alternative. “Strategic autonomy” and other fancy ideas are simply risky fantasies for Europe. Our call to the United States is to take transatlantic security and NATO seriously, even when pressing its allies hard to share the cost burden more equitably. We also call on European allies to stop cheerleading NATO’s demise and instead prioritize solidarity within NATO and cooperation between NATO and the EU, taking into account the legitimate expectations of non-EU allies. And we call on our American friends to keep us out of their domestic political campaigns.

Turkey’s accession to the EU

The hard brake applied to Turkey’s accession negotiations with the EU has been a strategic policy blunder. EU members and Turkey have no forum to talk, negotiate, and act jointly on issues that are important for all of us in Europe. But this mistake has been a product of EU policies, not Turkey’s. Contrary to what some French politicians claim about the benefits Turkey receives as an EU candidate, Turkey receives the least amount of Instrument for Pre-Accession Assistance (IPA) funds per capita. The EU-Turkey customs union provides both Turkey and the EU with economic benefits and Turkey pays its fair share for participation in EU programs. On top of that, the EU’s Facility for Refugees in Turkey has so far only spent 3 billion out of a pledged 6 billion euros since March 2016. While some may dismiss this money as a cash handout to Turkey, this money does not go to Turkey but to Syrians in Turkey, as its very name clearly indicates.If EU members and Turkey are to revitalize their relationship, we must return to a place where Turkey can negotiate its accession to the EU on the merits alone, without artificial obstacles created by domestic politics within EU members.

As Turkish Foreign Minister Mevlüt Çavuşoğlu noted recently, Europe is a delicate ecosystem of peace, security, and stability that is comfortably located between two European pillars of NATO: namely the United Kingdom and Turkey. Turkey helps protect Europe from a surrounding ecosystem that has been chaotic, undemocratic, and troubled, producing millions of forcibly displaced people, terrorism, destroyed cities, and a plethora of failing states. TheEU strategy to transform its neighborhood is failing mostlybecause of its own actions, including its failure to engender EU-Turkey alignment.

The European Union must understand our interconnectivity and stop recklessly pushing Turkey away. We value our relations with France and Greece, but believe that these problems have arisen because our legitimate rights and interests have been disrespected. Turkey, the EU, and the United States have more in common than we do not in common, and the stakes are higher than anyone in these crazy times seems to understand. It is up to all of us to change tack and jointly transform our neighboring ecosystem of chaos into a zone of sustainable peace and development. It is now high time that the EU and its member states treated Turkey as an accession-negotiating candidate and a strategic partner rather than as a rival.

Ambassador Faruk Kaymakcı is Deputy Minister of Foreign Affairs and Director for EU Affairs of the Republic of Turkey.

France must recognize its role in Libya’s plight

While Paris’s official policy in Libya has supported the United Nations-led negotiations over Libya and the Government of National Accord (GNA) that resulted from them, France’s real policy on the ground has been one of total and full support for Haftar’s forces.