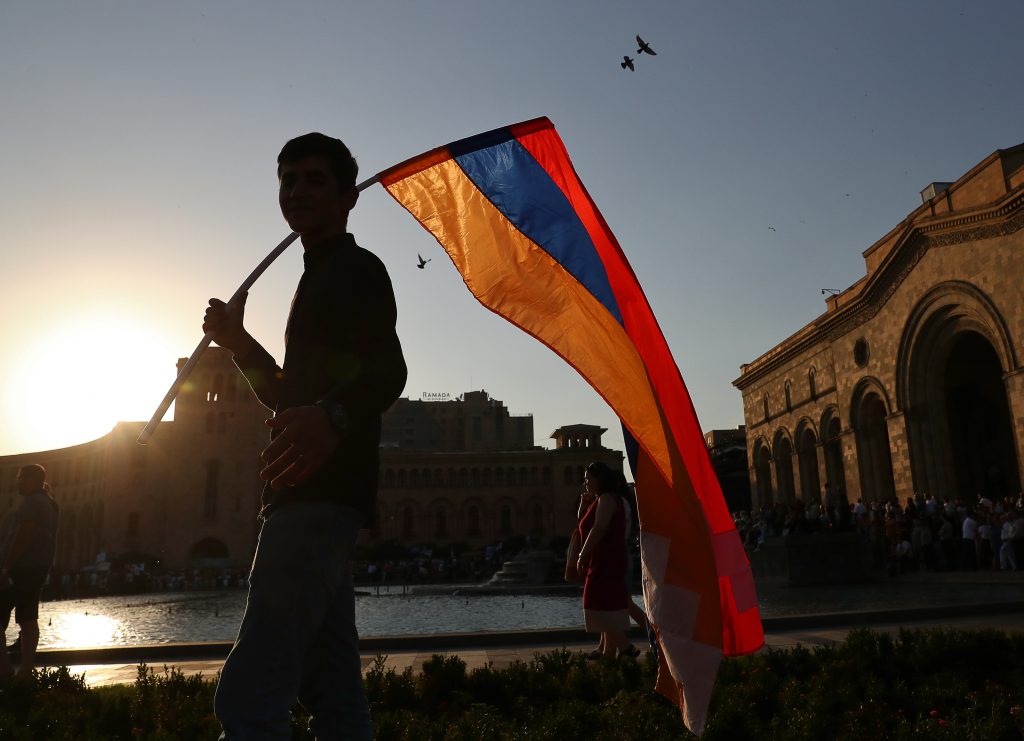 Armenians will go to the polls on June 20 in snap parliamentary elections that could have a decisive impact on the country’s geopolitical trajectory for the coming decade and beyond. Two recent events in Armenian history loom large over the election campaign: the country’s 2018 pro-democracy revolution, and defeat in the 2020 Nagorno-Karabakh conflict.

The forces of Armenia’s old guard lost political power amid the country’s democratic awakening of 2018. With emotions still running high due to last year’s disastrous military reversals, they are now attempting to mount a comeback, and are seeking to position the upcoming vote as a straight choice between democracy and security.

This Sunday’s vote comes during a dramatic phase in the democratization of Armenia. The process began with the tumultuous events of spring 2018, which saw a popular revolution bring an end to almost thirty years of post-Soviet authoritarian rule. The guiding principles of the 2018 uprising were sovereignty, democracy, and the rule of law.

While the revolution was a landmark event for Armenia, it did not transform the situation in the country overnight. The economy remains largely in the hands of a small group of power brokers, while most of the country’s strategic resources and infrastructure are still under Russian control.

Prior to 2018, successive previous Armenian administrations had enabled Russia to steadily expand its influence. In exchange, they were able to maintain their own grip on power, while also securing Russian pledges to prevent any escalations in the simmering conflict with Azerbaijan.

Anger over last year’s military defeat is now being exploited to argue that the democratic transition of 2018 fatally undermined Armenian security. As election day draws near, members of the country’s former political establishment are promoting the myth that Armenia cannot ensure its own security and arguing that only deeper integration with Russia can prevent further wars.

This narrative benefits from the old guard’s influence over much of Armenia’s mainstream media. Key messages include the idea that Russia was offended by Armenia’s democratic transition and therefore chose not to intervene decisively in last year’s fighting. Meanwhile, Armenia’s Western partners such as the European Union are accused of sitting on the sidelines during the conflict.

Closer ties with Moscow are being portrayed as entirely natural, with this implied retreat from Armenian independence justified by the claim that only Russia is capable of preventing the country from being overwhelmed by Turkey. The objective is to create the impression of a direct choice between security and democracy. In a nation still mourning last year’s losses and deeply uncertain of the country’s future, this is proving a powerful message.

Despite these efforts to weaponize the post-war climate for the purposes of counter-revolution, there is still considerable public support for the democratic changes ushered in three years ago. The current government has defiantly refused to reverse course, despite resignation demands from a range of authority figures in Armenian society including former presidents, members of the military, and religious leaders.

Many Armenians question the wisdom of trading sovereignty for Russian protection. There are also doubts over the kind of security Russia could actually provide. The current Russian military presence in Armenia failed to prevent the defeats of 2020. Meanwhile, if integration with Moscow deepens, few are enthusiastic about the prospect of Armenians being sent to fight in Russia’s many military campaigns in places like Ukraine and Syria.

Nor is everyone convinced that Armenia has no alternative options in the international arena. In recent months, there have been growing signs of support from the democratic world that bode well for the Armenian security environment. In particular, French President Emmanuel Macron has expressed his willingness to provide Armenia with military assistance.

Meanwhile, US President Joe Biden’s recent decision to officially recognize the Armenian Genocide was perceived as a highly significant event. This was not only a welcome step towards historical justice; it was also an indication that America stands with Armenia and is prepared to support the country on the global stage, even at risk of damaging relations with Turkey. Biden’s gesture resonated loudly in Yerevan.

The available polls ahead of Sunday’s vote lack credibility, but most observers expect the country’s pro-democracy forces to do well despite the traumatic backdrop to the current campaign. Many Armenians remain committed to the national course set in 2018 and reject the entire notion of a choice between democracy and security. On the contrary, they see the further democratization of the country as an essential step towards greater national security. This weekend’s election will provide an indication of whether this vision is shared by a majority of Armenians.

Lusine Hakobyan is a member of the board at the Alliance of Democracy Defenders For the Republic.

Ukraine must study the economic foundations of Azerbaijan’s military success

Ukraine must learn from Azerbaijan and look to create a strong economy built on modern technologies and broad international cooperation before seeking to regain Russian-occupied regions of the country.

Image: A man holds an Armenian national flag at a June 18 election rally in Yerevan. (Alexander Ryumin/TASS via REUTERS)