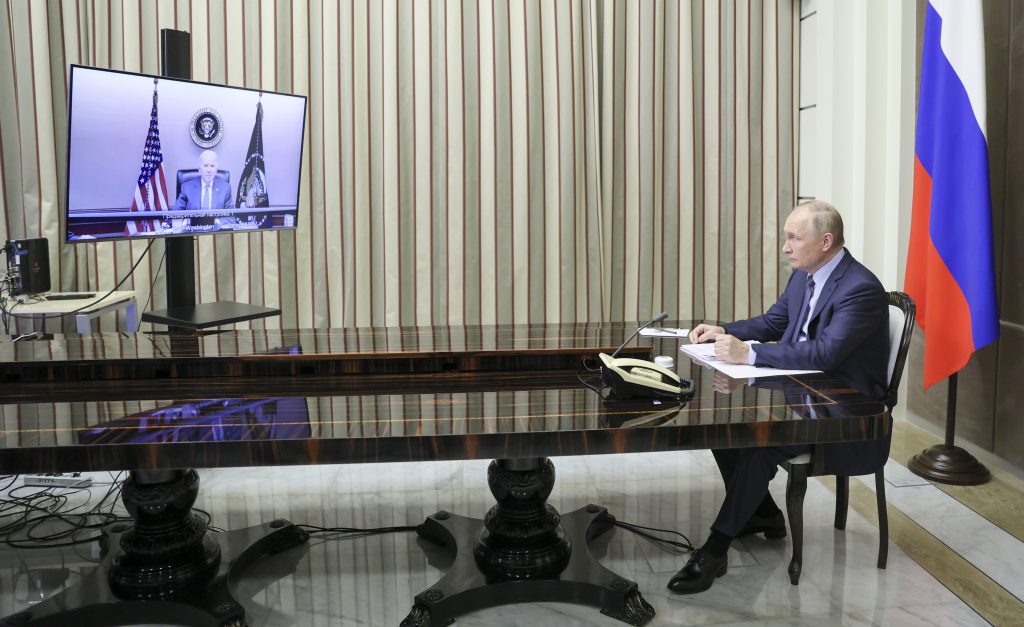 US President Joe Biden and his Russian counterpart Vladimir Putin spoke via video link for around two hours on December 7 in a hastily arranged virtual summit to address international concerns over a major Russian military build-up along the country’s border with Ukraine.

Russia has been waging an undeclared war against Ukraine since 2014 in a bid to derail the country’s Euro-Atlantic integration, and currently occupies the Crimean peninsula along with parts of eastern Ukraine’s Donbas region.

With Kyiv proving unwilling to accept Moscow’s interpretation of a 2015 peace agreement and instead moving further out of the Kremlin orbit, Putin has recently concentrated around 100,000 Russian troops and armor close to the Ukrainian border, leading to fears that the simmering conflict could erupt into a major European war.

The December 7 video call produced no major surprises. President Biden used the occasion to outline a range of new and enhanced sanctions measures that Russia will face if the invasion of Ukraine proceeds, while also emphasizing Western unity in support of Ukrainian sovereignty.

In response, Putin sought to downplay the significance of Russia’s military build-up while accusing NATO of fueling the confrontation over Ukraine. Both leaders agreed to continue talks.

The Atlantic Council invited a range of experts to share their views of what the Biden-Putin video call means for the regional security situation and asked whether the talks had succeeded in reducing the threat of a major escalation in Russia’s attack on Ukraine.

Barry Pavel, Senior Vice President, Atlantic Council: The Biden-Putin call was important. Dialogue that helps clarify each country’s position can help to avoid misunderstanding. Critically, President Biden’s clear three-pronged deterrence threat appears to be both credible and potentially effective for convincing Russia that an invasion in any shape or form would not be worth the US and NATO/EU response.

The three elements of the US deterrence posture include ramped-up economic sanctions on Russia. Over the years, these measures do not appear to have had any effect, but they are required for US-European unity.

Biden also raised the prospect of increased defense assistance to Ukraine. This could be highly effective for deterring Russia. If the US makes crystal clear that Russian forces would pay a heavy, sustained price if they invaded in the form of supporting Ukrainian resistance with massive numbers of IEDs, more anti-tank weapons, armed drones, air defenses and more, Putin may rethink the operation. The more details relayed to Russia on this point, the better.

The third factor is an increased NATO presence on the eastern flank. This leg of the deterrent could also help convince Putin that whatever he thinks he might gain from invading Ukraine, ultimately this would lead to a less favorable balance of forces for Russia. Moscow would surely not welcome substantially more NATO military capabilities in Poland, the Baltics, and Romania.

Equally important was what transpired both before and after the call. President Biden consulted extensively with key European allied leaders, helping him to present a united position to Putin.

Melinda Haring, Deputy Director, Eurasia Center, Atlantic Council: Nothing really changed as a result of the call between Presidents Biden and Putin. The situation remains acute and could easily escalate.

The statements emerging from the White House and Kremlin could not be more different. Washington and Moscow have reached an impasse over Ukraine and the future of the liberal international order.

To zoom in on the call, Biden pledged that the US and its allies would enact a fierce package of sanctions, send more defensive materiel, and fortify the NATO alliance on the eastern flank if Russia invades Ukraine again. But why wait until Russia strikes? The eastern flank should be fortified now.

I take Dr. T. X. Hammes’ prescriptions seriously: the US probably cannot get enough weapons systems to Kyiv in time for a potential January/February 2022 invasion. Thus, the US should help the Ukrainians prepare for a guerrilla war and get Kyiv the drones and any other equipment it may need now. The US could lean on the Israelis to lift their ban on drone sales to Ukraine as well.

Ian Brzezinski, Senior Fellow, Atlantic Council: The message President Biden communicated to Russian President Vladimir Putin in their December 7 video call was welcome but must be followed by further steps. The current situation is a crisis that warrants a forceful response from the transatlantic community, not just in terms of rhetoric but also actions.

Much is at stake. This includes Ukraine’s sovereignty and future as an independent, democratic, European state. Putin’s actions also pose a direct threat to the international security order that has been the basis of peace and stability in Europe for decades. The transatlantic community must now demonstrate their commitment to the defining values of sovereignty, democracy, and the rule of law.

This means articulating with specificity a forceful set of systemic sanctions that will be imposed on Russia in the event of further aggression against Ukraine, including shutting down Russian oil and gas exports, cutting the country’s access to financial markets, and removing Russia from the SWIFT banking system.

America and its allies need to strengthen their military presence in front line NATO states and increase their weapons transfers and engagement with Ukraine. Such actions are necessary to make clear to Putin that the costs of an invasion will be devastating for Russia and will far outweigh anything he hopes to gain by attacking Ukraine a second time.

Steven Pifer, William Perry Fellow, Stanford’s Center for International Security and Cooperation: Russia’s massing of military power near Ukraine was certain to dominate the December 7 video conference between Presidents Biden and Putin. A Russian assault would turn into a bloody affair (for Russians and Ukrainians alike) and plunge relations between Russia and the West deeper into crisis. Is Putin prepared to take that step?  Perhaps even he has not yet decided.

By all appearances, Biden did what he had to do. He spelled out for Putin the costs that would ensue if Russia attacked. These include more painful Western economic sanctions, more military assistance for Ukraine, and a bolstering of NATO’s military presence in the Baltic states and Poland. Moreover, he strengthened his hand by consulting the day before with the leaders of Britain, Germany, France and Italy.  That meant he could talk to Putin on the basis of a consolidated Western position.

Biden also described a way out of the crisis: de-escalation and dialogue, or dialogues, to address the Russia-Ukraine conflict in Donbas and broader European security questions. Neither of those discussions will prove easy. For example, NATO will not, and should not, accede to the Kremlin’s demand that the alliance renounce its “open door” policy on enlargement. But diplomacy is all about finding ways to defuse such difficult problems.

Did Biden succeed? That remains to be seen. One thing to watch is whether Moscow’s recent over-the-top rhetoric moderates. Of course, the more important signal would come from the movement of Russian troops away from Ukraine and back to their regular garrisons.

Danylo Lubkivsky, Director, Kyiv Security Forum: The video call between President Biden and President Putin allows us to draw a number of conclusions. For Ukraine, the single most important outcome was confirmation that our country does not stand alone against Russian aggression.

It was also striking to see the United States take on a position of international leadership in efforts to deter a fresh Russian invasion. Biden used the dangerous Russian military build-up on the Ukrainian border to consolidate partnership with other Western leaders in Europe.

Another prominent feature of the video call was the emphasis on Western unity that underpinned the clearly articulated list of sanctions and other measures Russia will face if it proceeds with the threatened offensive against Ukraine. This left Putin in no doubt over the consequences of such a decision.

Based on the available information, it appears that none of Ukraine’s core positions were compromised during the video call. This includes Ukraine’s future NATO membership or the broader enlargement of the alliance. Nevertheless, the threat of a Russian escalation remains and the situation will continue to require extreme vigilance and determination from the international community.