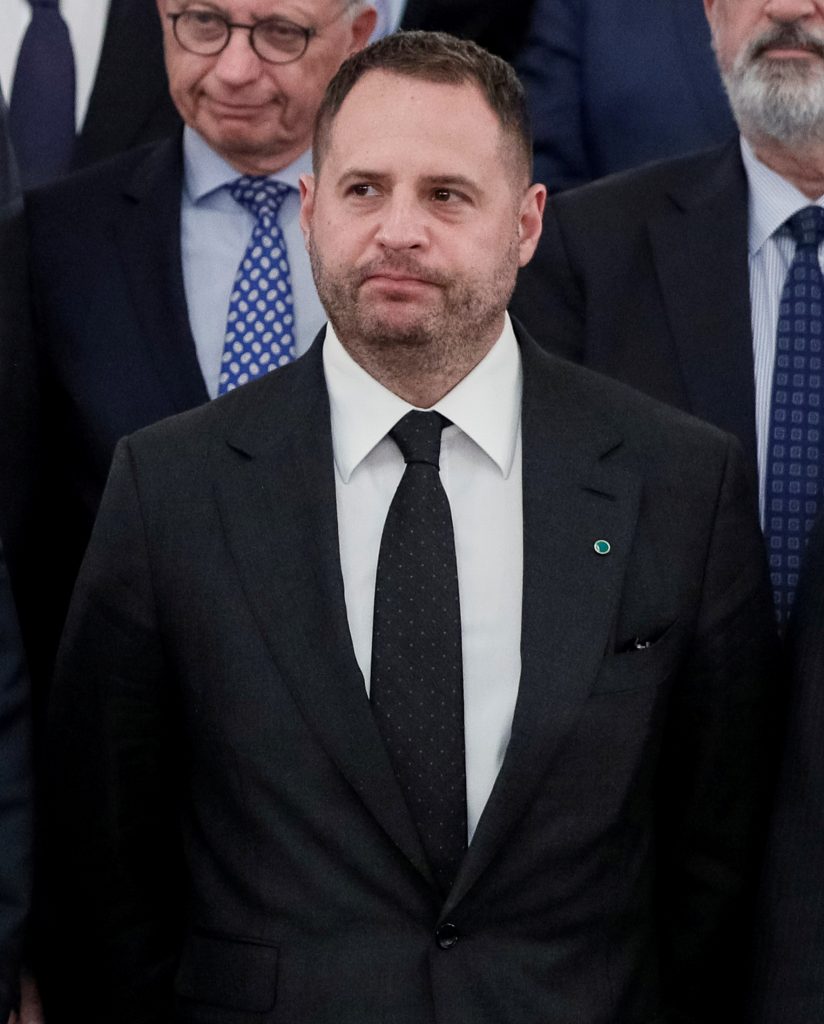 President Zelenskyy fired his chief of staff Andriy Bohdan on February 11 and replaced him with presidential advisor Andriy Yermak. The move represented the biggest personnel change within the administration since Zelenskyy took office in spring 2019. Bohdan’s departure follows weeks of speculation sparked by his disappearance from Zelenskyy’s inner circle, where he had formerly been a ubiquitous presence.

Many see the removal of Bohdan as a significant personal defeat for Ukrainian oligarch Ihor Kolomoiskiy and a sign of the billionaire’s waning influence over President Zelenskyy. Prior to heading up the Presidential Office, Bohdan had served as Kolomoiskiy’s personal lawyer.

Bohdan’s replacement Andriy Yermak is a longtime friend and associate of President Zelenskyy who has served as Zelenskyy’s special envoy in talks with both the US and Russia. Yermak’s prominent role in ongoing negotiations with the Kremlin has led to suggestions that his appointment could signal a new push to reach a settlement in the six-year undeclared war between Russia and Ukraine. What will this change in leadership at the Office of the President mean for Ukraine?

Anders Åslund, Senior Fellow, Atlantic Council: News that President Zelenskyy has dismissed his chief of staff Andriy Bohdan and replaced him with personal advisor Andriy Yermak arouses relief. The two had been Zelenskyy’s closest aides, but they fought about everything. One of them had to go. Bohdan’s dismissal has been expected since mid-December. Previously, he was always seen with Zelenskyy, but then he disappeared. Bohdan was responsible for law enforcement and the economy. He was often blamed for slow reforms in law enforcement, while not much praised for good economic policies. He was considered too close to the oligarch Ihor Kolomoisky. The recent eavesdropping scandal involving Prime Minister Oleksiy Honcharuk and the ensuing raid by the security services (SBU) at Kolomoiskiy’s television channel 1+1 might have forced Zelenskyy to sack Bohdan. Bohdan’s ouster signals open war between Zelenskyy and Kolomoiskiy and is a big loss for Kolomoiskiy. Yermak has been Ukraine’s top foreign policy maker, displaying considerable skills in dealing with both the Trump administration and the Kremlin, though he has been accused of being too soft on the Russians. Yermak will now receive responsibility for law enforcement and the economy, but he has said virtually nothing about what he will do. In particular, his economic policies are terra incognita.

John Herbst, Director, Eurasia Center, Atlantic Council: President Zelenskyy has established an admirable record in his short time on the job as both a reformer and foreign policy operator in very stormy conditions. Some of the credit must go to his recently ousted chief of staff Andriy Bohdan, who performed better than anticipated. Perhaps even more credit goes to the new chief of staff Andriy Yermak, who has helped manage the surprisingly treacherous turns in the bilateral relationship with Washington, and the successful prisoner swap with Moscow.

Alyona Getmanchuk, Director, New Europe Center: It was quite clear from the very beginning that Bohdan was a temporary appointment. He accomplished his mission by introducing political newcomer Zelenskyy to the workings of the state bureaucracy. Among Ukraine’s Western partners, Zelenskyy’s reputation suffered due to Bohdan’s background as oligarch Ihor Kolomoiskiy’s personal lawyer. Indeed, Bohdan’s presence as Zelenskyy’s chief of staff served as the most obvious evidence of possible links between the notorious oligarch and the Ukrainian president. With this in mind, Bohdan’s departure could be interpreted as a sign that the relationship between Kolomoiskiy and Zelenskyy has soured. However, I think the situation is somewhat more complicated. As for Bohdan’s successor Andriy Yermak, he is best known as President Zelenskyy’s special envoy. It is too early to say how effective he will be in his new position. He has clearly won the trust of President Zelenskyy, so we can assume Zelenskyy finds Yermak’s direct style of diplomacy effective. In light of Yermak’s lead role in negotiations with Russia and direct contact with the Kremlin’s new Ukraine curator Dmitry Kozak, we can expect the Office of the President to focus increasingly on bilateral talks with Moscow and efforts to end the Donbas conflict. There will also probably be renewed attempts to marginalize the Ukrainian Foreign Ministry’s role in foreign policy decision-making, given Yermak’s skepticism towards traditional diplomacy.

Oleksiy Goncharenko, Ukrainian MP, European Solidarity party: Bohdan’s departure draws the curtain down on the first chapter of Zelenskyy’s presidential term. Bohdan was one of the architects behind Zelenskyy’s 2019 election victory and remained a highly influential figure, but his removal indicates that the president no longer wants to be led. During the first nine months of his presidency, Zelenskyy effectively served in what was Bohdan’s administration. Now the president wishes to rule by himself, along with his close friends and associates from his show business days. This explains the appointment of Andriy Yermak as Bohdan’s successor. Yermak presents certain dangers due to his close connections to the Russian establishment. Prior to his appointment as chief of staff, Yermak’s main area of responsibility was dealing with the Kremlin. Zelenskyy’s choice is therefore a clear indication that he considers the Russian vector the priority of his presidency. This makes it tempting to recall another notable Yermak from Russian history. Yermak Timofeyevich famously led the Russian conquest of Siberia for Ivan the Terrible in the sixteenth century. With Vladimir Putin currently seeking to conquer Ukraine, many observers are now asking who Andriy Yermak intends to fight for.

Brian Bonner, Chief Editor, Kyiv Post: If Andriy Bohdan’s departure means President Zelenskyy is putting distance between himself and Ihor Kolomoiskiy, or increasing the effectiveness of his administration, then great. But I have my doubts. Many people consider Bohdan to have been the true reformer. Now, some fear for the future of able people like Aivaras Abromavicius, Ruslan Riaboshapka, and Artem Sytnyk. Is Andriy Yermak the architect of Zelenskyy’s current accommodationist policy towards the oligarchs, discredited law enforcement heads, former bank owners and mayors like Vitaly Klitschko, Gennady Trukhanov, and Gennady Kernes? If so, then Zelenskyy’s rating will keep dropping.

Peter Zalmayev, Director, Eurasia Democracy initiative: Andriy Bohdan’s resignation was not a surprise. It was merely a matter of time. Bohdan had been a controversial figure since the early days of the administration thanks to his ties to oligarch Ihor Kolomsoiskiy, which helped make him a source of suspicion both at home and among Ukraine’s international partners. His replacement by Andriy Yermak points to Zelenskyy’s desire for a more assertive foreign policy, particularly in terms of relations with Russia. It also reflects a shift in the center of gravity on foreign policy issues from the Ukrainian Foreign Ministry to the Office of the President. This process has been underway for some time. It was Yermak who Zelenskyy entrusted to engage with Rudy Giuliani last summer, and it was Yermak behind the negotiations with Moscow that led to two prisoner swaps in late 2019 and the long-delayed revival of Normandy Format peace talks in Paris. Opponents of Zelenskyy have been quick to condemn Yermak’s appointment and have sought to paint him as a clever and sinister operator whose ultimate goal is rapprochement with Russia, no matter what the cost to Ukraine’s sovereignty. This is probably an exaggeration, as Zelenskyy no doubt realizes the political risks involved in any concessions to the Kremlin. Indeed, Zelenskyy surrogates have been quick to stress that red lines regarding the peace process with Russia remain in place.

Michael Bociurkiw, Global Affairs Analyst: Shortly after Volodymyr Zelenskyy delivered his inauguration speech last May, the BBC’s Philippa Thomas asked me if the TV comedian-turned-politician “is his own man.” That was a difficult question to address at the time as oligarch Igor Kolomoiskiy had just returned to Ukraine after years in exile, presumably to exert influence over the president. Shortly afterwards, acting against advice to appoint a Western technocrat as his chief of staff, Zelenskyy selected Kolomoiskiy’s former lawyer, Andriy Bohdan. It is therefore good news that Bohdan is now out. His ouster will be celebrated by Ukraine’s lenders and especially by journalists, whom Bohdan treated derisively. His replacement, Andriy Yermak, seems skilled at dealing with important interlocutors ranging from Russian negotiators to shady characters associated with US President Donald Trump. While Yermak may have some questionable connections with Russian business, he is much more suitable than Bohdan. The Zelenskyy administration needs to up its game when it comes to countering negative publicity from the US impeachment proceedings and Yermak could very well be the right man at the right time to accomplish this.

Adrian Karatnycky, Senior Fellow, Eurasia Center, Atlantic Council: The resignation of Andriy Bohdan and his replacement by Andriy Yermak does not presage a fundamental change of course in Ukraine. This is because policy and priorities in Ukraine will continue to be set by President Zelenskyy. Some have tried to paint the removal of Bohdan, who indeed helped populate the current government with competent and serious reformers, as a setback for political and economic change. This is far from true. Bohdan was removed because his personal style was confrontational and he clashed with many of President Zelenskyy’s longtime associates and trusted confidantes. While Bohdan deserved praise for key tactical decisions, he also made many unnecessary enemies with his abrasive and indisciplined style. One canny insider, who is by no means a favorite of new chief of staff Andriy Yermak, put it this way: “It’s better to have a person with little government experience but also no experience as a political wheeler-dealer, than a longtime insider who often played by the old system’s discredited rules.” In short, Yermak’s appointment represents more a change of style than a change of course. He is a person of energy and competence who enjoys the president’s trust. Those are important qualities as Ukraine attempts to press forward with major reforms and test whether President Putin is ready to end the Russian occupation of the Donbas.

Why Andriy Bohdan is the wrong man for the time

Despite his age, Bohdan has shown himself to be yesterday’s man. His personal profile is not indicative of the values that the public expects from its new generation of political leaders.