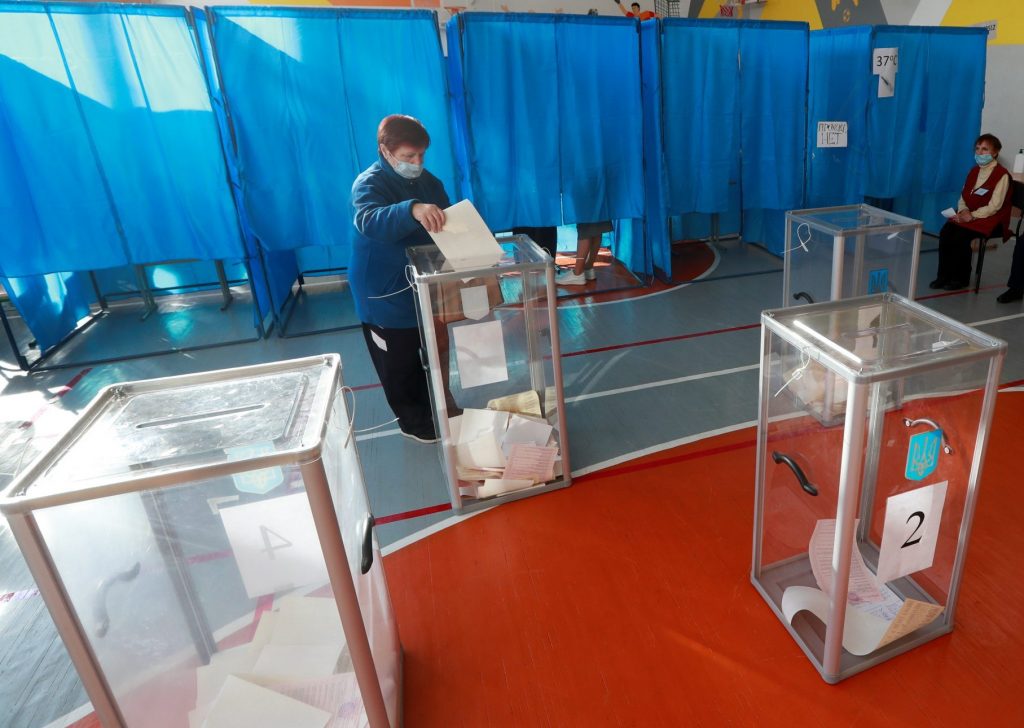 While many Ukraine watchers are inclined to frame Ukraine’s October 25 local elections as a referendum on President Zelenskyy’s first year in office and his Servant of the People party’s current strength as a political force, this approach may be misleading. In reality, the ballot was primarily a referendum on the quality of local governance in the country, and the result was a resounding vote of confidence in the existing municipal authorities.

The outcome of the recent local elections does not represent a conclusive verdict on President Zelenskyy or his party because they did not wholeheartedly engage in the campaign. In order to do so, they would have had to make the case that Ukrainian cities are less well off today than they were five years ago, which is simply not true. Crucially, they would also have needed a far more developed party infrastructure than currently exists.

In the year following the green wave of 2019 that saw Zelenskyy and his Servant of the People party sweep to landslide victories in both presidential and parliamentary elections, the young president and his colleagues have gone from populist newcomers to doing the hard work of actually running the country. Local engagement has declined as a consequence. Much like former Ukrainian Prime Minister Arseniy Yatseniuk and his People’s Front party, which won the most seats in the country’s 2014 parliamentary election before then proceeding to abandon all regional branches, the Servant of the People party demobilized its grassroots and online-based structures following last year’s election cycle.

For the past year, while going into so-called “Turbo Mode” in Kyiv to adopt legislation and engage government ministries on the issues they campaigned on, Servant of the People did not build up municipal party branches or recruit local talent in order to bring their national brand to local municipalities.

According to VoxUkraine data, Servant of the People had only registered 26 official party branches by August 2020, most of which were at the oblast level. This local footprint is far smaller that that of more established national parties such as Yulia Tymoshenko’s Batkivshchyna with over 7,000 branches, and former Ukrainian president Petro Poroshenko’s European Solidarity, which has more than 2,100 local branches. Even the pro-Kremlin Opposition Platform–For Life party has in excess of 200 local branches, primarily located in anticipated future parliamentary battleground oblasts in Ukraine’s central regions.

The recent local elections demonstrated that Ukrainians overwhelmingly approve of the direction their cities have taken over the past five years. This translated into a strong advantage for incumbents in most Ukrainian cities, who tend to enjoy much higher approval ratings than their counterparts on the national political stage. The decentralization and territorial amalgamation reforms launched since 2014 have clearly benefited Ukrainians, with the credit for this overwhelmingly going to the local rather than national authorities.

The budgetary windfall from fiscal decentralization has resulted in new roads, kindergartens, functioning elevators in residential buildings, and new public parks in local communities across Ukraine. These tangible improvements in the quality of daily life have combined to produce major advantages for local leaders and their purpose-built political parties, with mayors often quick to take personal credit for the progress that has been made possible by decentralization.

By not developing a regional branch strategy, Zelenskyy’s Servant of the People party missed a critical opportunity to prepare for these important elections and strengthen their brand among local voters. It is therefore not surprising that the party was not able to repeat the unprecedented landslide victories achieved in 2019’s presidential and parliamentary elections.

Instead, the October 25 election was dominated by powerful incumbent mayors reaping the dividends of successful decentralization reforms. In Khmelnitsky and Ivano-Frankivsk, for example, over 80 percent of citizens are satisfied with their mayors. This satisfaction was on display during the recent vote.

There will be plenty more opportunities for Zelenskyy’s party and its established training center in Kyiv to revamp their approach to regional politics and revise the strategies that proved so successful on the national scale. However, in retrospect, running a top down campaign for local elections in 2020 ignored the specific circumstances that made 2019 so distinct. Last year, Ukraine had a deeply unpopular national government in place and an equally unpopular parliament. In 2020, Ukrainians were generally satisfied with the direction their cities were headed. Many cities were led by well-liked mayors and councils that were seen as broadly delivering on public goods and services.

As official results come in and second round runoff battles are decided in the second half of November, there will surely be a continued drumbeat of opinions declaring this election to be a harbinger of the collapse in support for the president and his political party. Instead, these elections should be acknowledged as a win for local politics and for Ukrainian voters.

Despite the obstacles created by the COVID-19 pandemic and a host of poorly communicated last-minute safety measures, Ukrainians came out to more than 29,000 polling stations to elect over 40,000 local leaders. The election also witnessed robust competition between parties and candidates in hard-fought campaigns across the country.

Thanks to the effectiveness of the decentralization reforms implemented in Ukraine since the country’s 2014 Revolution of Dignity, a majority of Ukrainian citizens are now able to witness firsthand what good governance in their country looks like. In the months ahead, they will look to local leaders to continue citizen-centered governance and build on the progress made possible by decentralization. It is often said that all politics is local; this was certainly the case in Ukraine’s recent vote.

Ukraine's October 25 local elections served as a vote of no confidence in President Zelenskyy's ruling Servant of the People party and reflected a deep sense of disillusionment with all national political parties.

Image: A voter casts a ballot at a polling station in Kyiv during Ukraine's October 25 local elections. (REUTERS/Valentyn Ogirenko)