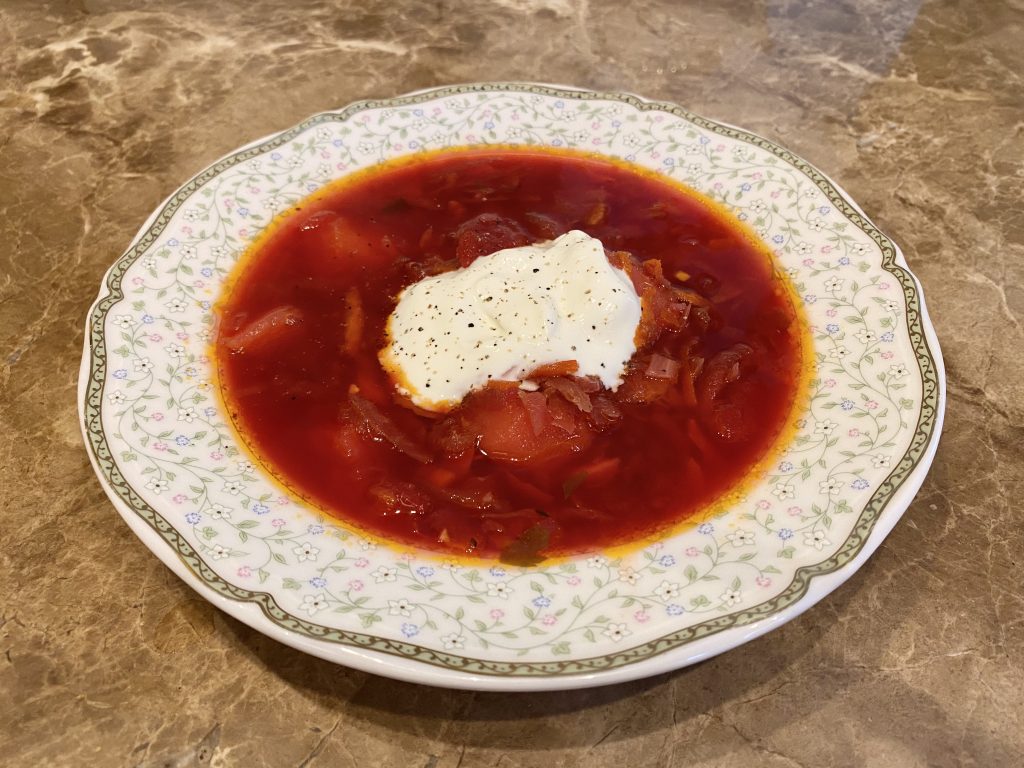 Borshch has recently emerged as the latest battleground in Ukraine’s struggle to assert an independent national identity and shake off centuries of Russian domination. In early October, the Ukrainian Ministry of Culture moved to add the hearty soup to its list of intangible elements of Ukrainian cultural heritage. Ultimately, Ukraine hopes to secure international recognition as the historic home of borshch via inclusion on UNESCO’s cultural heritage list.

This campaign is another step in Ukrainian efforts to distance itself from Russia, whose narratives on history, culture, language, and even the culinary arts often overshadow or overlap Ukraine’s on the world stage.

Last year, an official Russian government twitter account incensed many Ukrainians by describing borshch as one of Russia’s “most famous and beloved dishes and a symbol of national cuisine.” Some quipped that the Kremlin was clearly not content with seizing Crimea, and was now also attempting to steal one of Ukraine’s most celebrated national dishes.

In the battle for borshch, Russia is unlikely to accept defeat graciously. The day after the Ukrainian Ministry of Culture’s decision to brand the dish as part of the nation’s cultural heritage, Moscow indicated it wasn’t pleased with Kyiv’s culinary initiative. An article in Russian government publication Rossiyskaya Gazeta called the move “a new cause for an international scandal.”

Russia has a long history of passing aspects of Ukrainian culture and heritage off as its own. This has included everything from folk dances to Christmas carols. During centuries of rule over Ukraine, Russia has also seized vast quantities of artifacts from Ukrainian churches, monasteries, palaces, and archeological sites for display in Russian museums, where they are typically presented as elements of Russia’s own national story.

Part of the problem lies in the fact that modern Ukraine and Russia both trace their roots back to the early medieval Kyiv Rus state. While today’s Ukraine is home to the capital city and many of the most important sites of the Kyiv Rus epoch, centuries of Russian imperial rule over Ukraine allowed it to control the historical narrative virtually unchallenged. This state of affairs lasted until the fall of the USSR. As a result, Russia’s claim to be the successor to the Kyiv Rus has traditionally enjoyed widespread acceptance, while Ukraine’s rival interpretation has remained shrouded in obscurity.

Since achieving independence in 1991, Ukraine has sought to push back, reclaiming various aspects of its identity from Russia as part of a broader nation-building journey. Following the onset of Russian aggression against Ukraine in 2014, this has become a matter of national security. With the Kremlin’s historical pretensions towards Ukraine playing a central role in Russia’s hybrid war against the country, Ukraine’s ability to assert an alternative and independent identity has been anything but academic.

These efforts have included the Ukrainian Foreign Ministry’s highly successful CorrectUA campaign, which began in 2018 and encourages international media outlets to adopt the Ukrainian language transliterations for Ukrainian place names. This has helped to persuade many of the world’s most high-profile media brands such as the Associated Press, BBC, Financial Times, Washington Post, and Guardian to switch their spelling of the Ukrainian capital city from “Kiev” to “Kyiv”.

The Ukrainian struggle to escape Russia’s shadow extends far beyond the spheres of history and national identity. Over the past six years of hybrid hostilities, it has made an impact on virtually every sphere of daily life, from business and the media to culture and religion.

Ukraine’s single most significant nation-building achievement since 2014 has been securing the right to create an independent Orthodox church. This late 2018 breakthrough struck at one of the last vestiges of Russian dominance over Ukrainian society. The Russian Orthodox Church responded in dramatic fashion by breaking ties with the Ecumanical Patriarchate in Turkey. Moscow has subsequently lobbied the Orthodox world’s other patriarchates not to recognize the newly formed Orthodox Church of Ukraine.

As Ukraine and Russia go through what is an increasingly painful geopolitical divorce, economic ties have also suffered. With import and export volumes between the two countries plummeting to record lows, China has overtaken Russia to become Ukraine’s largest trading partner. The European Union has also cemented its position as the biggest market for Ukrainian exports, with the relationship benefiting from the free trade component of the landmark EU-Ukraine Association Agreement signed in 2014.

Once regarded by many as virtually indivisible, the physical boundaries between Ukraine and Russia have hardened considerably since 2014. Direct flights between the two countries were suspended in 2015 and rail services have been dramatically reduced. Meanwhile, many of Russia’s most famous showbiz performers have been denied entry to Ukraine, either in response to their public support for Russian aggression against Ukraine, or as a result of unsanctioned visits to Russian-occupied Crimea.

In an attempt to limit the Kremlin’s ability to wage information warfare inside Ukraine, Russian TV channels have been blocked, along with access to popular Russian social media sites. There have been parallel efforts to increase the presence of Ukrainian-language content on the Ukrainian media landscape. Ukrainian-language content requirements in all forms of media have brought Ukrainian films, sitcoms, music, and publications to the forefront at the expense of their Russian-language counterparts. This has helped fuel a recent boom in the Ukrainian music and film industries.

Efforts to claim borshch as Ukrainian are part of this broader process. The dish is popular throughout Eastern Europe and can be found in a dizzying array of varieties in Ukraine alone, but it occupies a special place in the country’s national lore. Just as champagne comes from France and Parmesan cheese is Italian, Ukrainians see borshch as theirs and now want the world to acknowledge this. It may seem like a storm in a soup bowl, but this initiative reflects the grand historical processes currently underway in a country that is determined to emerge from the international shadows.

Image: Borshch has long been a staple of Ukrainian cuisine and Kyiv officials now hope to make the connection official by securing UNESCO recognition of the soup's Ukrainian roots. (Photo: Elizabeth Dickinson/@liza__dickinson/Nelly Manasyan)