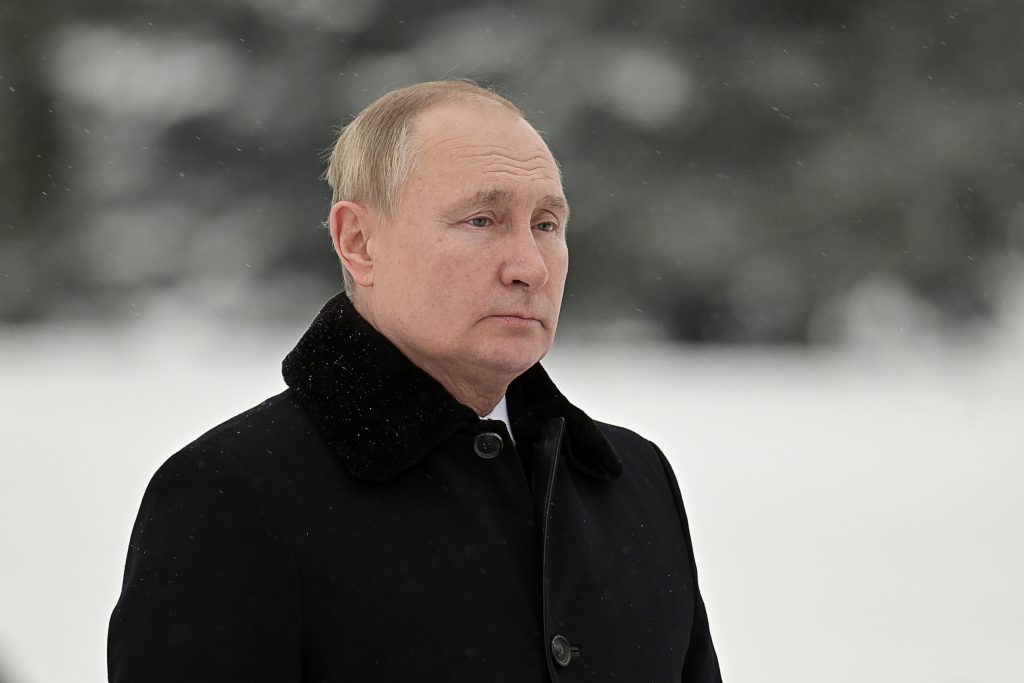 We are currently living through what many observers regard as the most dangerous geopolitical crisis for a generation. Russia has massed a vast military force along its border with Ukraine and is threatening to unleash a full-scale invasion of the country if its demands are not met. The ensuing conflict would likely be the largest in Europe since WWII, with unclear but dire consequences for the entire continent.

At the heart of this crisis is one man’s refusal to accept the verdict of the Cold War and his burning resentment at modern Russia’s diminished standing on the global stage. Throughout his political career, Vladimir Putin has made no secret of his desire to revive Russia’s international prestige and address the perceived geopolitical injustices of the recent past. These imperial ambitions have found expression in Putin’s increasingly public obsession with Ukraine, a country whose very existence has come to embody the Russian ruler’s darkest fears and his many historical grievances.

A clear understanding of Putin’s Ukraine obsession is essential for anyone who wishes to make sense of the current crisis. Luckily, this task has been made considerably easier by the summer 2021 publication of a 5,000-word essay on the topic authored by Vladimir Putin himself.

Entitled “On the Historical Unity of Russians and Ukrainians,” Putin’s remarkable treatise showcases his contempt for Ukrainian statehood and his belief in the artificial nature of the country’s current separation from Russia, which he blames on insidious outside influences. Putin the amateur historian states unequivocally that Ukrainians and Russians are “one people” and concludes by declaring “I am confident that true sovereignty of Ukraine is possible only in partnership with Russia.”

The Russian president’s tract has certainly helped raise international awareness of his Ukraine obsession. British Defense Minister Ben Wallace recently penned his own article on the subject and drew many alarming conclusions from his sober analysis of Putin’s own words. “President Putin’s article completely ignores the wishes of the citizens of Ukraine, while evoking that same type of ethno-nationalism which played out across Europe for centuries and still has the potential to awaken the same destructive forces of ancient hatred,” noted Wallace. Nevertheless, relatively few Western politicians or policymakers appear to have fully grasped the scale or implications of Putin’s preoccupation with Ukraine.

According to Russian journalist Mikhail Zygar, Putin has been obsessed with Ukraine since his first year in office back in 2000. This obsession intensified following the 2004 Orange Revolution, which Putin saw as a personal humiliation after his ill-judged intervention in Ukraine’s presidential election helped spark the pro-democracy uprising.

Putin’s entire attitude towards the democratic world changed following the Orange Revolution. He blamed the West for fermenting and supporting Ukraine’s protest movement and came to view the revolution as a dress rehearsal for a similar uprising inside Russia itself. Within months, Putin had launched the Russia Today TV channel and set out on a new course of nationalistic confrontation with the Western world, sowing the seeds for today’s hybrid war.

Ever since the Orange Revolution, Putin has regarded the return of Ukraine to the Russian sphere of influence as his most important task. This is the “unfinished business” he must accomplish if he wishes to secure his legacy and enter the Russian history books as one of his country’s greatest rulers.

It is often suggested that Putin is nostalgic for the Soviet Union and wishes to recreate the USSR, but his particular brand of Soviet nostalgia is in fact largely driven by a desire to rehabilitate the totalitarian past and legitimize the authoritarian present. Putin intensely dislikes Soviet leader Vladimir Lenin and frequently accuses him of having created today’s problems with Ukraine by fostering a separate sense of Ukrainian national identity and attaching historically Russian lands to Soviet Ukraine.

Putin’s real inspiration is not the nominally internationalist USSR but the ultra-nationalist Czarist empire. His rejection of Ukrainian statehood and his denials of a separate Ukrainian nation are firmly rooted in the Czarist past and closely mirror statements and policies towards Ukraine from the days of the Russian Empire.

To fully appreciate Putin’s Czarist mindset, it is important to understand that his infamous April 2005 statement calling the Soviet collapse “the biggest geopolitical catastrophe of the twentieth century” has been widely misinterpreted. Crucially, Putin qualified his claim by adding, “for the Russian people, it became a real drama. Tens of millions of our citizens and countrymen found themselves outside Russian territory.” In other words, the Soviet collapse was a catastrophe specifically for Russians because it left their country divided and incomplete.

Putin expanded on this idea in December 2021, describing the fall of the USSR as “the disintegration of historical Russia under the name of the Soviet Union.” “We turned into a completely different country,” he claimed. “And what had been built up over 1,000 years was largely lost.”

From Putin’s perspective, the greatest loss of all was Ukraine. A nation of over forty million, Ukraine is home to the world’s largest ethnic Russian population outside of Russia itself. It is also arguably the closest of the former Soviet republics to Russia in terms of ethnicity, culture, history, and religion. Indeed, the Ukrainian capital Kyiv is revered as the “mother city” of Russian history. So when he laments the fall of the Soviet Empire and speaks about the injustice of the post-Soviet settlement, Putin is really thinking of Russian imperialism and has Ukraine primarily in mind.

Putin has never fully accepted Ukrainian independence and continues to regard the country as only partially sovereign. He is dismissive of Ukrainian agency and prefers to blame the current collapse in bilateral relations on a combination of Ukrainian extremists and foreign meddling.

In recent years, the idea of Ukraine as a puppet state of the West has become a key Russian narrative. Despite overwhelming evidence to the contrary, Kremlin propagandists and government officials remain insistent that a silent majority of Ukrainians secretly long for a return to Mother Russia.

These claims of foreign plots are a convenient way to avoid acknowledging the painful truth that modern Ukraine has simply rejected Russia in favor of Euro-Atlantic integration. They also mask Putin’s fear that Ukraine’s embrace of democracy will inspire demands for similar changes inside Russia.

Putin remains haunted by the wave of pro-democracy uprisings that swept Eastern Europe in the late 1980s, setting the stage for the subsequent Soviet collapse. He sees Ukraine’s fledgling democracy as a direct challenge to his own authoritarian regime and recognizes that Ukraine’s historical closeness to Russia makes this threat particularly acute.

Moscow has attempted to blame the current crisis on decades of alleged NATO encroachments into Russia’s traditional sphere of influence. However, while the Kremlin has presented the West with a long list of security demands, Russian officials have repeatedly made clear that isolating Ukraine from the democratic world is their top priority.

Putin has argued that even without Ukrainian NATO membership, closer cooperation between the alliance and Ukraine poses a direct security threat to Russia. This makes little sense. Ukraine has been holding joint military exercises with NATO member states for nearly three decades without incident, while neither NATO nor the US have any intention of installing the kind of sophisticated missile systems in Ukraine that could reach Russia.

The real cause of today’s crisis is Putin’s quest to return Ukraine to the Russian orbit. For the past eight years, he has used a combination of direct military intervention, cyber attacks, disinformation campaigns, economic pressure, and coercive diplomacy to try and force Ukraine into abandoning its Euro-Atlantic ambitions. The failure of these efforts has led us to the current confrontation, with Russia now warning of “military-technical measures” if it does not succeed in re-establishing its dominance over Ukraine.

Putin’s ultimate objective is Ukraine’s capitulation and the country’s absorption into the Russian sphere of influence. His obsessive pursuit of this goal has already plunged the world into a new Cold War. It could now ignite a major armed conflict in the heart of Europe.

Nothing less than Ukraine’s return to the Kremlin orbit will satisfy Putin or assuage his fears over the further breakup of Russia’s imperial inheritance. He will not stop until he is stopped. In order to achieve this, the West must become far more robust in responding to Russian imperial aggression, while also expediting Ukraine’s own Euro-Atlantic integration.

Ukrainians have chosen a democratic European future for themselves and their country. However, until Putin accepts this choice, the threat of war will continue to hang over Eastern Europe.

Dr. Taras Kuzio is a Research Fellow at the Henry Jackson Society in London. His new book “Russian Nationalism and the Russian-Ukrainian War” is published on January 27.

Image: Russian President Vladimir Putin attends a flower-laying ceremony at the Motherland monument at the Piskaryovskoye Memorial Cemetery to mark the 78th anniversary of the end of Leningrad Siege. 27 January 2022. (Alexei Nikolsky/Russian Presidential Press and Information Office/TASS via REUTERS)