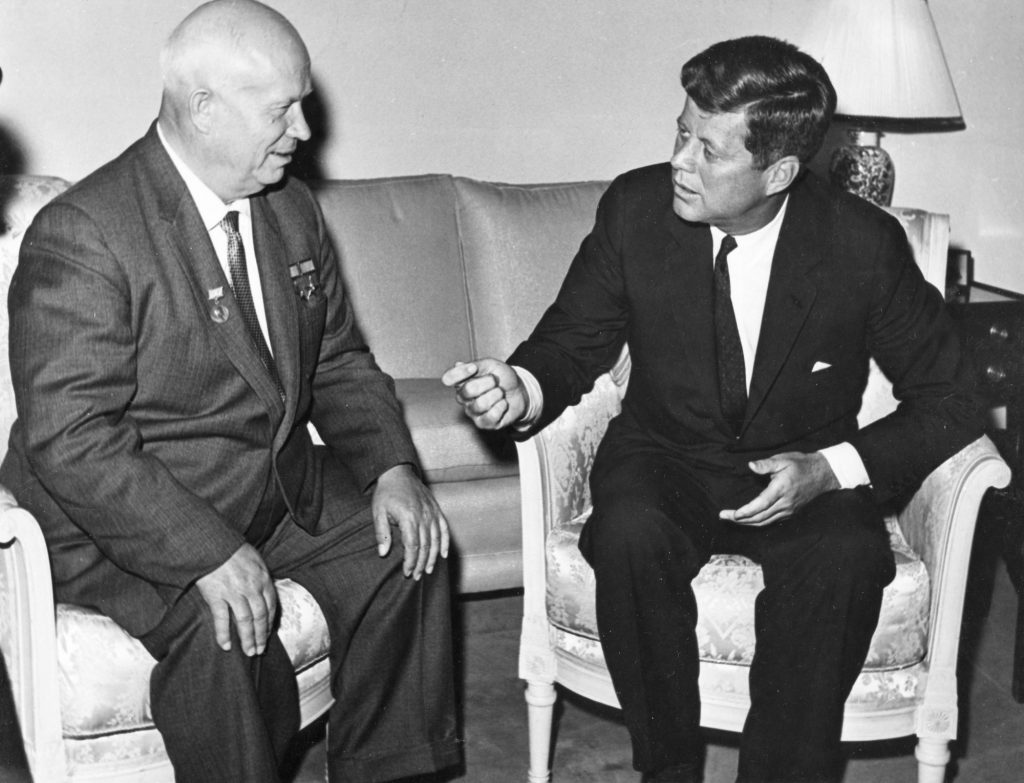 Whether history rhymes or not, with war raging in Ukraine and Russian pundits threatening direct nuclear attacks against the US, perhaps some knowledge of the past may be helpful in assessing where this conflict is headed.

One could argue that we are now at a comparable moment to 1915, when World War I ground to a bloody stalemate. Alternatively, is this 1940 after Hitler overran Western Europe? Or have we now reached the modern equivalent of Midway and Stalingrad in 1942, when the course of World War II profoundly shifted in favor of the allies?

There is a better analogy. Sixty years ago, the US and Soviet Union faced off in the most dangerous superpower confrontation of the Cold War. But if the Cuban Missile Crisis is to be used as a comparison for the Ukraine war, it is crucial to dispel the myth that Soviet Leader Nikita Khrushchev provoked the crisis. In reality, US President John Kennedy did so by promising to close a so-called missile gap that was actually in America’s favor.

For decades, the myth has held that a courageous young US President forced a dangerous adversary to remove Soviet missiles from Cuba. But that rendition is tragically incomplete. Khrushchev was greatly reducing Soviet military spending well before Kennedy took office in 1961. In January 1960, Soviet reserve forces were cut by one million men. In January 1961, newly elected President Kennedy embarked on a massive nuclear and conventional military buildup. In April, the disastrous Bay of Pigs invasion of Cuba was launched. Each development disrupted Khrushchev’s plans.

Facing angry and alarmed generals, Khrushchev would attempt to outflank US strategic superiority at minimal cost by secretly installing short-range nuclear missiles in Cuba, targeting America’s east coast. But Khrushchev’s ploy failed on all counts. A naval “quarantine” was imposed on Cuba. Khrushchev relented and the Soviet Union began its massive rearmament.

Any comparisons with the current situation are not exact. Ukraine is not Cuba. Cuba was a Soviet ward, ninety miles off the Florida coast. Ukraine borders both Russia, its enemy, and NATO. NATO was not involved in the Cuban crisis but is engaged in Ukraine. Nor is Russia the USSR. Russia is a nuclear superpower. In 1962, the USSR was not. Similarly, Putin is not Khrushchev. Khrushchev had a Presidium that two years after Cuba would remove him, whereas Putin is not so constrained. To Khrushchev, Cuba was not existential. Putin may view Ukraine differently, especially after announcing the annexation of four partially occupied Ukrainian provinces.

Biden is not Kennedy. Kennedy’s response to Soviet missiles in Cuba reflected his failure to understand the real cause of the crisis. After forming a secret Executive Committee (EXCOM) of experts for advice, Kennedy disregarded Moscow’s first threatening hot line message. These were perhaps the two most important decisions of the crisis. He also made all the intelligence public at the UN. Biden did not form an EXCOM. Instead, his staff has conferred with outside experts on an ad hoc basis. Biden has been cautious and even self-deterring in rearming Ukraine to prevent escalation. He released intelligence exposing Russia’s invasion plans, which might have had the opposite effect of taunting Putin into attack.

What could this mean for Ukraine? First, the US, NATO, and Russia are currently deadlocked over how to end the crisis. The US refuses negotiations or a ceasefire without a complete Russian withdrawal from Ukraine and a commitment for reparations. Putin’s September 21 speech was regarded by Washington as an ultimatum implying nuclear weapons could be used. Biden could ignore that warning as Kennedy did. However, the annexation of four Ukrainian regions is a further indication of the gravity of the situation.

Second, Kennedy left Khrushchev a way out of the crisis, privately agreeing not to invade Cuba and to withdraw missiles from Turkey. Despite intense political pressure to condemn, punish, and hold Putin solely responsible for the invasion, especially from Ukraine that understandably wants all its territory back, some flexibility may be prudent if the war is to be ended.

Third, Kennedy tightly controlled all negotiations within the EXCOM. Biden has ceded to Ukrainian President Volodymyr Zelenskyy the right to decide where, when, and how negotiations will take place. Do NATO and the US want to allow a decision or error on Zelenskyy’s part to precipitate a wider war? One hopes not.

Fourth, are Biden and Putin repeating Kennedy’s and Khrushchev’s mutual misjudgments and misunderstandings? If yes, is that resolvable?

Fifth, the Soviet ambassador in Washington during the Cuban Missile Crisis, Anatoly Dobrynin, served as a critical, trusted intermediary. Who can be today’s Dobrynin, given that Biden has labeled Putin a “war criminal?” This is a good question with no answer.

The Cuban Missile Crisis was resolved in thirteen days. The Ukraine war is now entering its tenth month and seems to be stalemated. In 1962, Kennedy’s strategy resolved the crisis. Today’s strategy only serves to extend, not end, the war. What to do?

In light of these issues, the administration requires a new strategy. Observations from the Cuban Missile Crisis are instructive. Perhaps an EXCOM is needed. Misunderstandings and misjudgments are always present. An EXCOM may mitigate these dangers. Above all, a multi-pronged strategy that includes non-military means such as diplomacy and sanctions is needed to end the war on favorable terms and provide long-term security for Ukraine.

Admitting Ukraine to NATO is not currently realistic. Admission would violate NATO’s requirements for fixed borders and would also contradict common sense. Upon entry, Article 5 would be tested. An attack against one is an attack against all. Is NATO prepared for war against Russia? And frankly, Ukraine will not get the required unanimity for entry. Finland and Sweden so far have not.

The first and most important step is to give Ukraine more than only a defensive capability to protect itself. To deter future Russian aggression, Ukraine must have the capacity to retake lost territory. As in Cuba, diplomacy is also needed. Intermediaries could be China, India, France, Turkey, or the UN. India and China made interesting comments about Russia at September’s Shanghai Cooperation Organization meeting in Samarkand. And as in Cuba, there must be off-ramps for all parties.

A combined arms capability for Ukraine would require tanks, advanced tactical aviation, and missiles with the range to strike Russia, along with enhanced intelligence, training, and logistical support. Other NATO states should be providing similar support along with the US.

For the long term, perhaps a Taiwan Relations-like Act between the US and Ukraine could be signed. While not a defense treaty, the US would commit to ensuring Ukraine had sufficient capacity for self-defense. And as a quid pro quo, Ukraine would agree to deferring NATO membership for at least a decade.

Only the future will determine whether the crisis in Ukraine was more dangerous than Cuba in 1962. At the moment, given that the Cuban Missile Crisis was satisfactorily resolved and nuclear weapons were not verbally threatened, Ukraine would seem to be a far more volatile and risky scenario.

A coherent strategy is vital to avoid a Putin nuclear blitz. Sadly, based on the current path of hoping Ukraine will inflict sufficient casualties on the Russian army to force a negotiation, nothing can be ruled out. And that is not a place any sensible person wishes to be.

Dr. Harlan Ullman is a senior advisor at the Atlantic Council and the prime author of “shock and awe.” His latest book, The Fifth Horseman and the New MAD: How Massive Attacks of Disruption Became the Looming Existential Danger to a Divided Nation and the World at Large, provides the complete story of the Cuban Missile Crisis. The book is available on Amazon. He can be reached on Twitter @harlankullman. An abridged version of this article previously appeared on UPI.