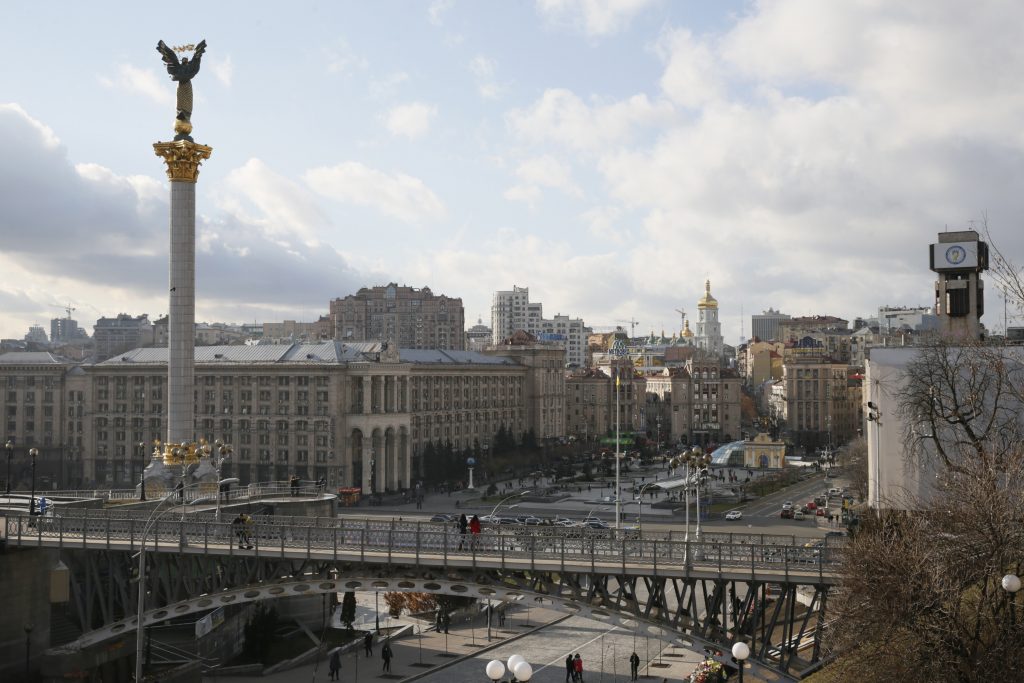 Kyiv’s Independence Square is probably the single most famous place in Ukraine. Universally known by its Ukrainian-language name of Maidan Nezalezhnosti or simply “Maidan”, it has achieved a remarkable degree of international recognition in recent decades as the location of not one but two post-Soviet revolutions, and has lent its name to a grassroots form of protest politics that continues to keep dictators across the former USSR awake at night. Maidan is quite simply the ultimate symbol of Ukrainian independence.

This was not always the case. Indeed, during the early years of Ukrainian statehood, Maidan was in many ways an accidental monument to the incompleteness of the newly independent country’s break from the Soviet past.

When the USSR collapsed in 1991, the colossal Lenin monument that had dominated Kyiv’s central square for much of the Communist epoch was unceremoniously removed from its plinth. At the same time, there was a name change from October Revolution Square to Independence Square. However, other symbols of the Soviet empire remained highly visible, serving as a tongue-in-cheek commentary on Ukraine’s claims to sovereignty at a time when it often felt like all roads still led to the Kremlin.

Until 2001, the hotel complex dominating the skyline behind the square retained the Soviet era name of Hotel Moscow. During preparations to celebrate a decade of Ukrainian independence, embarrassed officials belatedly decided that this Moscow branding was perhaps inappropriate for the country’s main independence square, and hurriedly changed the name to the far more suitable Hotel Ukraine. Even more conspicuous was a giant hammer and sickle carved in stone on the facade of the Trade Union Building. This four-meter Soviet crest continued to loom large over the north side of Maidan until as late as 2003, when it was finally removed on the eve of annual independence day celebrations.

In those early days, Maidan carried no special significance. It was an anonymous public space popular among weekend strollers that also served as a frequent no-frills concert venue and impromptu taxi rank. Taxi drivers were attracted by the opportunity to gawp at a giant TV screen erected on the spot where Lenin once stood, which broadcast a strangely apt combination of cage-fighting and catwalk shows that captured the Weimar mood of the period.

The 2004 Orange Revolution was a watershed moment in Maidan’s metamorphosis, imbuing the square was a sense of dignity and gravitas it had previously lacked. The mass rallies of the Orange Revolution were not the first political protests to take place on the square; that honor belonged to the student demonstrations of October 1990 that helped pave the way for Ukraine’s August 1991 declaration of independence. However, the uprising of late 2004 completely dwarfed anything that had come before it, with mass protests attracting hundreds of thousands of participants and captivating global audiences for an entire month.

Following the Orange Revolution, it became increasingly common for people to use the term “Maidan” in a political context. This was equally true in Ukraine itself and elsewhere throughout the post-Soviet world. Russia in particular soon became obsessed with the threat posed by the Maidan model of popular protests. Nevertheless, it would take another decade before Kyiv’s main square finally completed its transformation.

In late 2013 and early 2014, Maidan once again became the focal point of a popular uprising as millions of Ukrainians protested the government’s last-minute decision to abandon plans for a landmark Association Agreement with the European Union. By now, the square’s fame and associations with political activism were such that this new protest movement was quickly dubbed “Euromaidan.”

Unlike 2004, it did not end peacefully. In February 2014, dozens of protesters were gunned down in the immediate vicinity of the square as the uprising reached a bloody climax. This tragedy left an indelible mark on Ukraine and served to consecrate Maidan as a sacred place at the heart of modern Ukraine’s post-Soviet experience.

Since the Maidan Massacre of early 2014, the square no longer hosts glitzy pop concerts and rowdy public holidays. Instead, it has become something more akin to a shrine, while also serving as an unofficial national stage for all manner of Ukrainian self-expression.

Today’s Maidan continues to attract its fair share of political protests, but it also regularly hosts memorial tributes to fallen soldiers and vigils marking important events in the nation’s life. Meanwhile, the square now routinely features on the itineraries of visiting foreign dignitaries, who come to Maidan to pay their respects to those who died on the spot seven years ago in defense of democracy.

Maidan is not universally revered by all Ukrainians. For the many who reject the popular uprisings of 2004 and 2014, the square carries negative connotations as a place where a vocal minority was able to seize control of the state and steer Ukraine in the wrong direction. There is also considerable cynicism towards the Maidan phenomenon, with no shortage of populists and opportunists ready to exploit the powerful associations of the square in order to advance their own agendas.

Despite these reservations, few would dispute that over the past three decades, Maidan has become synonymous with Ukraine’s nation-building journey. In an era where the search for unifying symbols from the country’s troubled past has often sparked bitter memory wars and poisoned the Ukrainian political climate, Maidan’s evolution from ambiguity to iconic status offers an important echo of independent Ukraine’s own coming of age. In this sense, the dramatic post-Soviet transformation of Kyiv’s central square tells the story of modern Ukraine.

Image: Over the past three decades, Kyiv's Independence Square has undergone a post-Soviet metamorphosis that mirrors independent Ukraine's own national coming of age. (REUTERS/Valentyn Ogirenko)