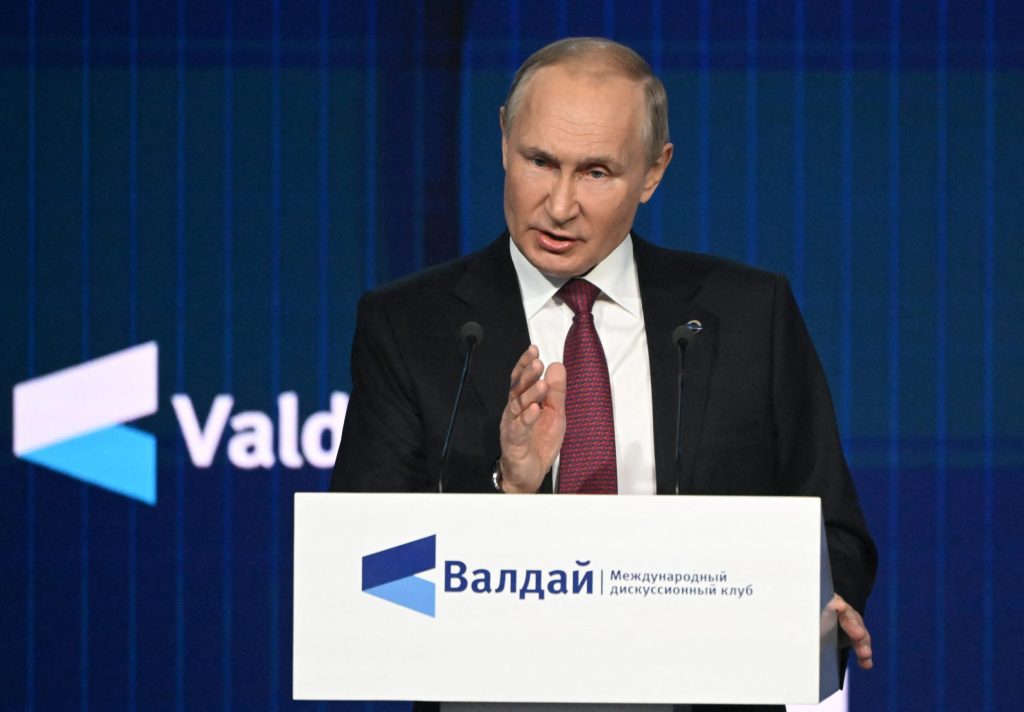 Why did Vladimir Putin invade Ukraine? The answer to this question really depends on when you’re asking. In the months leading up to the invasion, the Russian dictator focused his ire on NATO and sought to blame rising tensions around Ukraine on the military alliance’s post-Cold War expansion. As his troops crossed the border on February 24, Putin changed tack and declared a crusade against “Ukrainian Nazis.” More recently, he has sought to portray Ukraine as a “terrorist state” while insisting that Russia is in fact fighting against “Satanism.”

None of these arguments stands up to serious scrutiny. Instead, the various different narratives coming out of the Kremlin reflect Moscow’s increasingly desperate efforts to justify what is in reality an old-fashioned colonial war of imperial conquest.

Putin has long sought to use NATO expansion as an excuse for his own aggressive foreign policies. This plays well with the Russian public and also resonates among segments of the international community who believe the United States has become too dominant since the end of the Cold War. However, Putin’s attempts to position the invasion of Ukraine as a reasonable response to NATO encroachment have been comprehensively debunked by his own actions.

According to Reuters, Ukraine informed Russia during the first days of the invasion that it was ready to meet Moscow’s demands and rule out the possibility of future NATO membership, only for this offer to be rejected by Putin. Ukrainian President Volodymyr Zelenskyy went public in the following weeks with similar proposals to abandon Ukraine’s NATO ambitions, but Russia chose to continue its invasion.

The entire notion that Russia views NATO as a credible security threat was further undermined in summer 2022 when Moscow passively accepted neighboring Finland’s historic decision to join the military alliance. Putin has repeatedly cited Ukraine’s deepening NATO ties as justification for his invasion, but the prospect of imminent Finnish membership provoked no meaningful security response whatsoever from the Kremlin.

If Putin genuinely believed a NATO invasion of Russia was even a remote possibility, he would surely have reinforced the Finnish border. On the contrary, in the months following Helsinki’s decision to join the alliance, Russia dramatically reduced its military presence close to Finland and the nearby NATO member Baltic states in order to bolster the invasion of Ukraine. Whatever Putin may say in public, he clearly understands that NATO poses no threat to Russia.

Russian myth-making about “Ukrainian Nazis” is even older than complaints over NATO expansion and dates all the way back to Soviet World War II propaganda. For decades, Moscow has exaggerated wartime cooperation between Ukrainian nationalist groups and the Third Reich while conveniently ignoring the far more consequential Nazi-Soviet Pact. By conflating Ukraine’s centuries-old liberation movement with Nazism, generations of Kremlin leaders have sought to render Ukrainian national identity toxic in the eyes of domestic and international audiences alike.

Putin’s enthusiasm for the “Nazi Ukraine” trope is very much in line with his broader efforts to place the Soviet World War II experience at the heart of modern Russian identity. Over the past two decades, Putin has turned traditional Russian reverence for the generation who defeated Hitler into a quasi-religious victory cult complete with its own feast days, holy relics, and doctrinal dogmas. This has enabled him to whitewash the crimes of the Soviet era while attacking contemporary adversaries as the spiritual successors to the Nazis. In Putin’s Russia, accusations of Nazism are a routine feature of the public discourse and have been leveled against a dizzying array of individuals, organizations, and entire countries, but Ukraine remains by far the most popular target.

The effectiveness of these tactics has always depended heavily on outside ignorance of Ukraine and Russia-centric reporting by Moscow-based international correspondents. Unfortunately for Putin, his invasion has shone an unprecedented media spotlight on Ukraine that has done much to debunk the whole “Nazi Ukraine” narrative.

This was long overdue. Throughout the past 31 years of Ukrainian independence, the far-right has never come close to achieving power in Ukraine and remains significantly less influential than in many other European countries. While far-right candidate Marine Le Pen received 41.45% in France’s 2022 presidential election, the Ukrainian far-right typically struggles to secure low single digit support at the ballot box. During Ukraine’s last presidential election in 2019, the leading nationalist candidate garnered 1.6% of the vote. Months later in the country’s most recent parliamentary election, many of Ukraine’s far-right parties joined forces in a bid to improve their fortunes. This united nationalist platform failed miserably, winning a mere 2.15% of votes.

Nothing highlights the absurdity of Russia’s “Nazi Ukraine” allegations better than the rise of Volodymyr Zelenskyy. The Ukrainian President is both Jewish and a native Russian speaker. According to the Kremlin, this should make him deeply unappealing to Ukrainian voters. On the contrary, Zelenskyy was elected president by a record margin and subsequently secured a unique parliamentary majority for his newly formed political party. This success was all the more remarkable as it was achieved during wartime elections held amid an atmosphere of heightened patriotic fervor.

Since the start of the invasion, Russia’s failing efforts to portray Ukraine as a Nazi state have forced Moscow into ever more implausible mental gymnastics. Unable to produce any actual Ukrainian Nazis, regime officials and propaganda proxies have attempted to argue that the very idea of an independent Ukraine is in itself a Nazi concept, while also acknowledging that Putin’s stated war aim of “de-Nazification” in practice means the “de-Ukrainization” of Ukraine.

The Kremlin’s confusion was perhaps most immediately evident in the bizarre and disgraceful anti-Semitic comments made by Russian Foreign Minister Sergei Lavrov during a May appearance on Italian TV program Zona Bianca. When asked to address the obvious contradictions between Russia’s “Nazi Ukraine” claims and the fact that Ukraine has a Jewish president, Lavrov responded by declaring that Adolf Hitler also had “Jewish blood.” His statement sparked a wave of global condemnation, with Putin eventually forced to intervene and offer a personal apology to Israeli leaders.

This embarrassing incident illustrated the remarkable recent degradation of Russian diplomacy, which has now reached the point where it is often indistinguishable from internet conspiracy theories. Forced by Putin’s invasion to defend the indefensible, Russia’s top diplomats have retreated into an alternative reality world of blanket denials and dark fantasies. While Lavrov rants about “Jewish Hitler,” Russian Ambassador to the UN Vasily Nebenzya stuns his colleagues with fantastic tales of genetically engineered Ukrainian mosquitoes. No wonder exasperated British Ambassador Barbara Woodward recently felt moved to ask, “How much more of this nonsense do we have to endure?”

The awkward absence of Ukrainian Nazis and Russia’s non-response to Finland’s NATO membership bid have left Putin in desperate need of new narratives to explain his ongoing invasion. Disinformation researchers have recently noted a spike in Russian references to Ukraine as a “terrorist state” amid apparent efforts to position the war as a counter-terrorism operation. This has included a high-level campaign led by Putin himself and Russian Defense Minister Sergei Shoigu, who have both groundlessly accused Ukraine of plotting an act of nuclear terrorism involving a dirty bomb.

While the idea of Ukraine nuking itself may seem far-fetched even by Russian standards, this is by no means the Kremlin’s most audacious excuse. Since late September, senior regime officials have gone even further and have been actively seeking to rebrand the invasion of Ukraine as a holy war against Satanism. Putin set the tone by calling his opponents “Satanic” during a landmark address marking the official annexation of four Ukrainian regions.

Others have enthusiastically followed Putin’s lead. In October, the deputy secretary of Russia’s influential National Security Council, Alexei Pavlov, declared that it was becoming “more and more urgent to carry out the de-Satanization of Ukraine.” This call was echoed by former Russian President Dmitry Medvedev, who stated in a November 4 post marking Russia’s National Unity Day that the goal of the Ukraine invasion was “to stop the supreme ruler of Hell, whatever name he uses: Satan, Lucifer, or Iblis.” Key propagandists including Vladimir Solovyov have also endorsed the idea that Russia is at war with Satanism.

Behind Moscow’s increasingly outlandish attempts to justify the invasion stands a deeply unpalatable truth. Far from being a reaction to Western encroachment or Ukrainian extremism, Putin’s decision to invade Ukraine is the product of an unapologetically imperialistic mindset that he shares with millions of Russians who refuse to accept the verdict of 1991.

Putin’s entire reign has been shaped by his burning resentment at the perceived injustice of the Soviet collapse, which he regards as the “disintegration of historic Russia.” This has fueled his obsession with Ukraine, which for centuries occupied a key position at the very center of Russian imperial identity. Putin sees the existence of an independent Ukraine as a symbol of the unjust post-Soviet settlement and regards the country’s embrace of European democracy as an existential threat to Russia. He has repeatedly denied Ukraine’s right to statehood while arguing that modern Ukraine has been artificially separated from Russia. On the eve of the invasion, he called Ukraine “an inalienable part of our own history, culture, and spiritual space.”

The Russian dictator’s most revealing remarks came in summer 2022, when he directly compared his invasion of Ukraine to the eighteenth century imperial conquests of Russian Czar Peter the Great. Putin sought to qualify this claim by insisting he was merely “returning historically Russian lands,” but the actions of his invading army bear all the hallmarks of a brutal colonial conquest. Russian troops have reduced entire cities to rubble and killed tens of thousands of Ukrainian civilians. In areas of Ukraine under Kremlin control, the Russian military has engaged in mass executions and forced deportations. Meanwhile, all symbols of Ukrainian national identity have been ruthlessly erased.

This is the grim reality that all advocates of appeasement and proponents of a negotiated peace must address. Nobody wants to end the current war more than the Ukrainians themselves, but they also recognize that there is no room for compromise between genocide and survival. Russia has gone to great lengths to disguise the true nature of its imperial war in Ukraine, but Ukrainians are not fooled. They understand perfectly well that unless Russia is decisively defeated, Ukraine will cease to exist.

Instead of listening to Moscow’s fake grievances and fairytales about devil-worshiping phantom fascists, the international community must make clear to the Kremlin that Russian imperialism has no place in the modern world. The increasingly absurd nature of Putin’s excuses is an indication of his mounting desperation, but he has yet to abandon the colonial conquest of Ukraine. Unless he is forced to do so, Russia’s unreconstructed imperial ambitions will remain a threat to world peace.