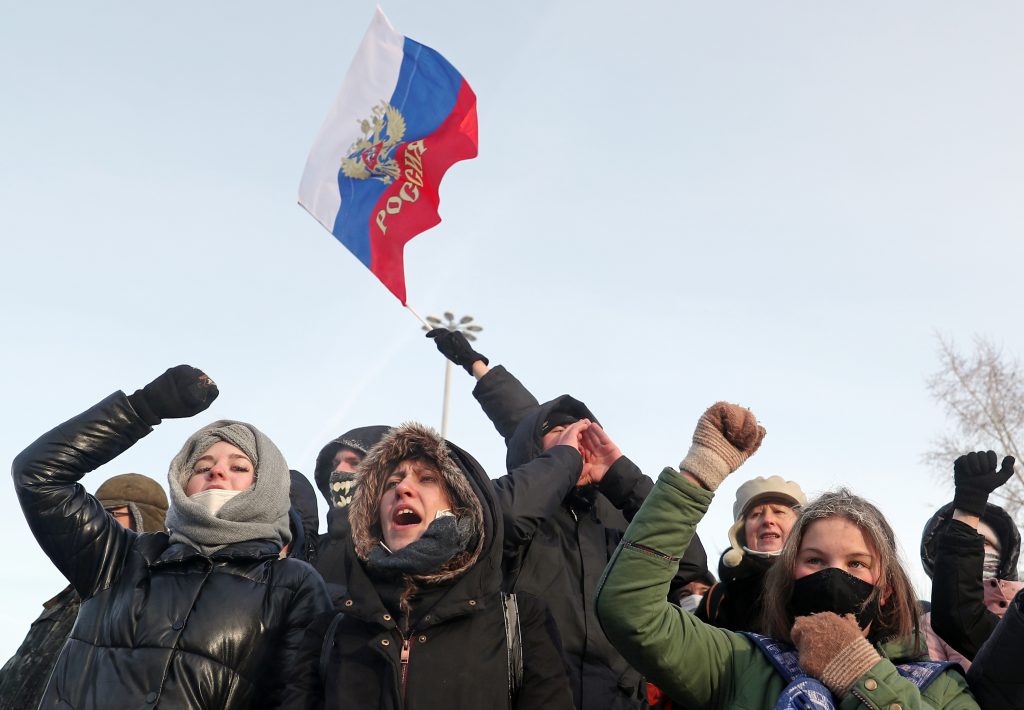 Russia witnessed the largest wave of nationwide protests the country has seen for a number of years on January 23 as thousands of Russians expressed their solidarity with imprisoned anti-corruption activist Alexei Navalny. With Navalny still languishing in jail and further protests expected in the coming weeks, it appears Russia is entering a new period of heightened social tensions which is likely to be accompanied by repressive measures.

At this stage, it remains far too early to speculate over the possible implications of the protests. However, it is already clear that Navalny’s anti-Putin message has resonated with residents of the Russian regions far away from the country’s traditional centers of political activity in Moscow and St. Petersburg.

The past few weeks have seen Alexei Navalny cement his status as the undisputed leader of Russia’s anti-Putin opposition. His dramatic return to Russia and subsequent airport arrest, followed by the release of a sensational video claiming to expose Putin’s secret palace and personal corruption, enabled Navalny to loom large over Russian public life throughout mid-January. This culminated in the nationwide protests of January 23, which drew estimated crowds of between 200,000 and 300,000.

No other opposition figure in contemporary Russia can generate such public engagement. Nor can they compete with Navalny’s digital reach. His most recent YouTube video detailing Putin’s palace attracted almost 100 million views within a week of publication on January 19. Prior to his poisoning in August 2020, Navalny had been one of numerous relatively high-profile personalities at the forefront of the Russian opposition movement. Recent events have underlined that he now stands alone as a rival to Vladimir Putin.

The protests of January 23 did not indicate a decisive shift in public support towards the Russian opposition. However, the comparatively large crowds in regional towns and cities across the country represented the biggest nationwide mobilization for the past decade, and possibly for the entire post-Soviet period.

Protest actions took place in over 120 cities throughout Russia. While it is difficult to provide an accurate indication of the overall number of people who joined these regional protests, most observers agree that individual protests were significantly larger than those held in 2011-12, when mass rallies also took place in opposition to a flawed election and Putin’s return to the presidency.

First-hand accounts and video footage confirm that thousands attended January 23 protests in regional capitals ranging from Irkutsk and Omsk in Siberia to Smolensk close to Russia’s western border with Belarus. These large crowds are an indication of growing regional resentment towards the Putin regime. The Kremlin will view this as particularly alarming because regional cities located far from Moscow have traditionally served as the heartlands of support for Putin and loyalty to the regime.

Moscow itself has yet to match the recent levels of engagement on display in the regions. The January protests in the Russian capital were similar in size to the rallies of 2017 and 2019 but no larger.

There are a number of possible reasons for the lack of growth in Moscow protest numbers. The opposition has been very active in Moscow in recent years but has not managed to secure much in return for its efforts, fueling a sense of frustration and protest fatigue.

Muscovites are also more likely to be satisfied with their lifestyle and contented with the policies of Moscow Mayor Sergey Sobyanin. While residents in the struggling Russian regions have felt the brunt of the economic downturn in recent years, Moscow dwellers have been relatively insulated against any hardships. It is possible that Moscow will catch up with the protest mood in the rest of the country, but this may require several more waves of protests.

The geographical diversification of Russia’s anti-regime opposition movement signals a decline in the concept of authorized and unauthorized protests. In the past, there had been a sharp divide between authorized and unsanctioned protests. Typically, far fewer people would attend unauthorized rallies for fear of arrest or other negative consequences. However, the scale and extent of the protests on January 23 indicates that such distinctions are now becoming increasingly obsolete.

Across many Russian regions, people joined protests in previously unseen numbers. The fact that these rallies did not have government authorization did not prevent them from becoming arguably the largest regional protests since the collapse of the USSR. This trend significantly undermines the Kremlin’s capacity to control and regulate future protests.

What does the rise of regional political activism mean for the future of the protest movement? Navalny has clearly managed to unite a wide range of social groups across different geographical regions by appealing to common political and economic grievances. However, many questions remain.

With Navalny himself expected to receive a substantial prison sentence, much will now depend on how long his team can sustain current levels of popular mobilization. Based on the experiences of Moscow’s 2019 protests and the 2020 protest movement in Russia’s Far East, Russian protests appear able to maintain peak mobilization for up to three months before losing momentum. This represents a huge challenge for a national protest movement with an imprisoned leader.

Maria Snegovaya is a Nonresident Fellow at the Atlantic Council and a Postdoctoral Fellow at Virginia Tech.